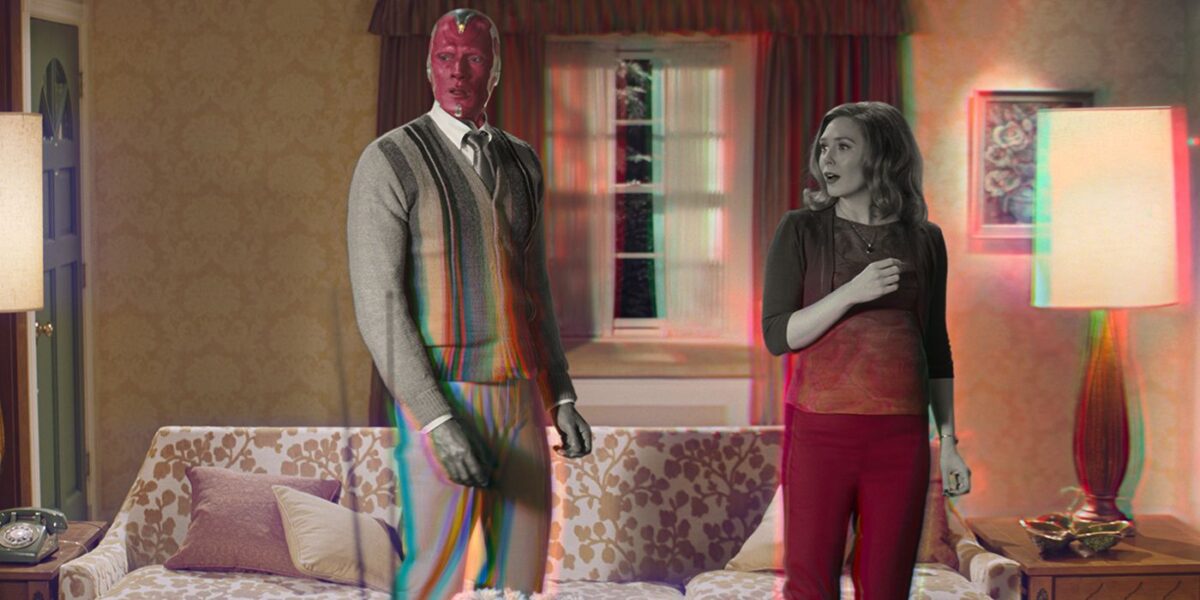 We’re one week closer to the release of Marvel’s WandaVision on Disney+, and honestly, all is good in the world of Wanda Maximoff stans. The show, which is going to focus on Wanda coping with the loss of Vision, along with … well … everything that has happened to her since joining the Avengers, is taking an approach to the character that seems so incredibly perfect.

Having Wanda cope through different television archetypes is, truly, fascinating. She has these powers of manipulation that we only got a glimpse of throughout the Marvel Cinematic Universe, and watching her get to unpack her own story through her gift? That’s something that is going to be fascinating to watch unfold.

With the latest trailer for the show, we’re getting a look into the TV aspect of Wanda’s story, and the show is going to have original music from Frozen songwriting duo Kristen Anderson-Lopez and Robert Lopez!

Every new trailer for WandaVision brings me a different wave of emotions. Wanda Maximoff is a character that I care deeply about, and getting to see her have her moment is a little bittersweet. At first, I didn’t like that she was sharing it with Vision, but from what I can see with the trailers, I think the show is going to do a good job of having Wanda work through her pain at losing him while still being the strong character she is in the comics.

Wanda Maximoff is the strongest Avenger. There’s no question about it. She literally held off Thanos while destroying the Mind Stone and, by default, killing Vision. She knows what she has to do to save the world and does it despite the pain it will cause her, and I love her with my entire being.

This trailer gives us a look into some heavy connections to Wanda’s comic book roots—mainly that of her sons, Billy (Wiccan) and Tommy. While they were created through Wanda’s powers, they eventually became real men and sons of Scarlet Witch, and with all the rumors of the Young Avengers heading to the MCU, it does look like Billy showing up could mean that Hulking (his husband in the comics) is on the way.

There’s just this feeling I get when I see new content for WandaVision that I can’t really put into words. I wanted to protect Wanda from the minute I met her, only made worse by Civil War when she showed up in the beginning with chipped nails. She was my baby, and I wanted her to have her time, and now, it’s finally here and I’m just so excited to see what happens for Wanda.

WandaVision will run for 9 episodes, one of the longest shows on the Disney+ platform currently, since both seasons of The Mandalorian were only 8 episodes each. Wanda Maximoff deserves her time, and I cannot wait to see what WandaVision has in store for us.