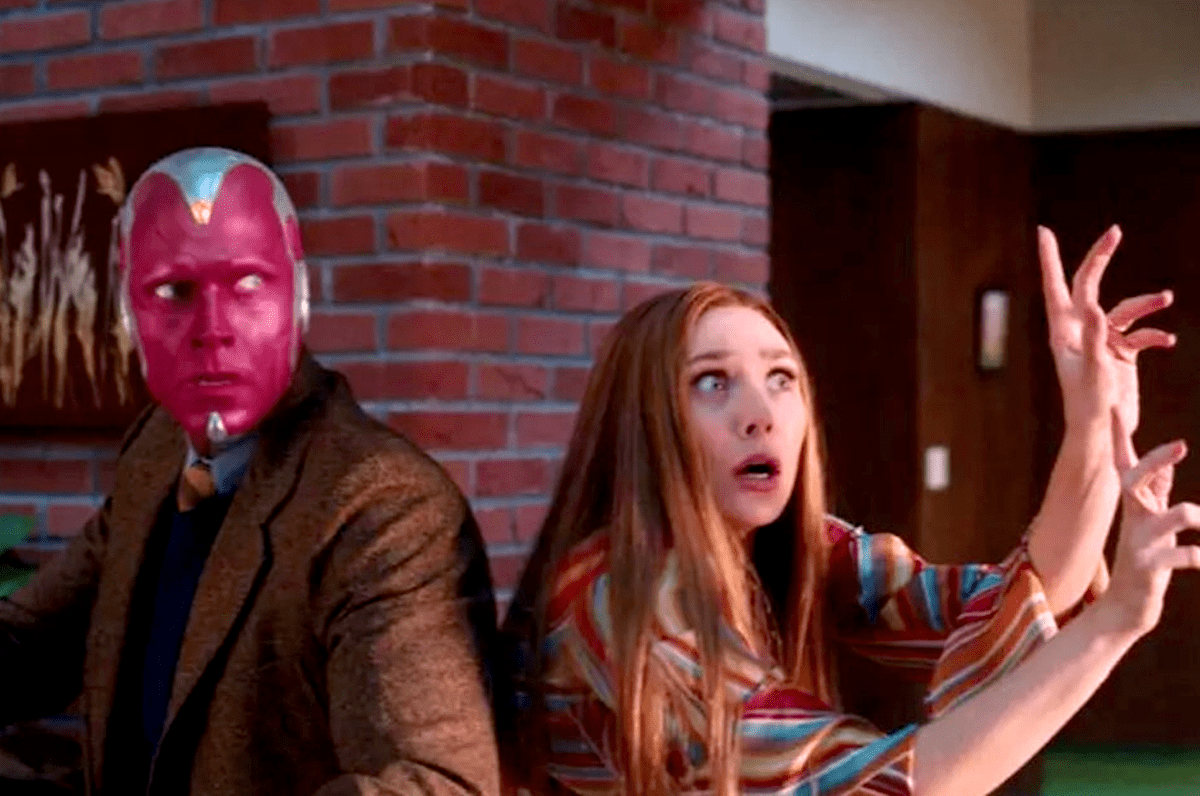 WandaVision is in many ways a great entry point for someone who’s never watched a Marvel movie or series before. The shifting-sitcoms theme makes it widely accessible from the start. Your non-MCU relatives, friends, lovers, frenemies, and coworkers can still get a kick out of the constant familiar TV land references and settings, and it’s hard not to get sucked in by the compelling premise.

Much of the heavier MCU happenings around the “Maximoff Anomaly” feel like Easter eggs for longtime MCU fans rather than necessary knowledge. Still, when you watch WandaVision with someone who has no concept of the wider cinematic universe, you find yourself saying some … interesting things by way of explanation. Here are some of mine. 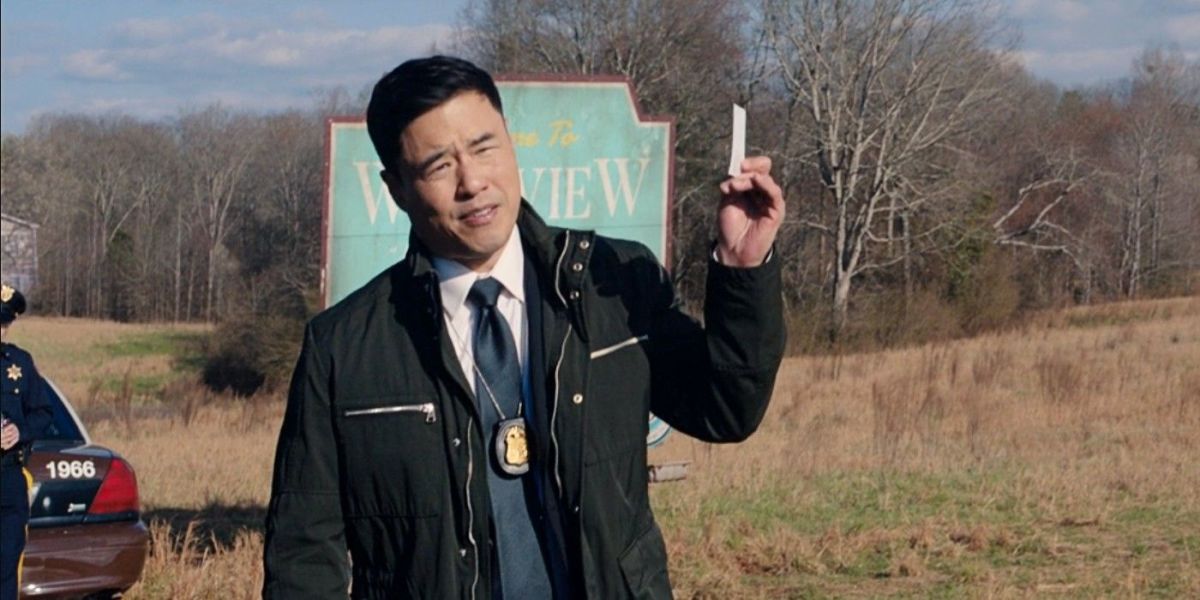 “Oh, that’s Agent Jimmy Woo. He was the absolute best thing about Ant-Man and the Wasp and had some real chemistry with Paul Rudd. I wish they’d gone on that date. He was a sort of well-intentioned foil in Ant-Man but they wisely realized they had gold on their hands with Randall Park so now he’s here. I love him. I wish this was the Jimmy Woo Show. If they make an X-Files-esque spin-off starring him I would literally die.” “That’s Darcy Lewis. She was Natalie Portman’s intern in Thor but now she’s a doctor of astrophysics. She’s one of everyone’s favorite side characters like Jimmy Woo so this show’s supporting cast is pretty much the MVPs of MCU minor characters which is a really great idea. Kat Dennings also starred in a sitcom for like a decade so I think they’ll probably play up on that if they ever make it to more modern sitcoms. She dated Loki for a while. No, not Darcy. Kat Dennings did.” 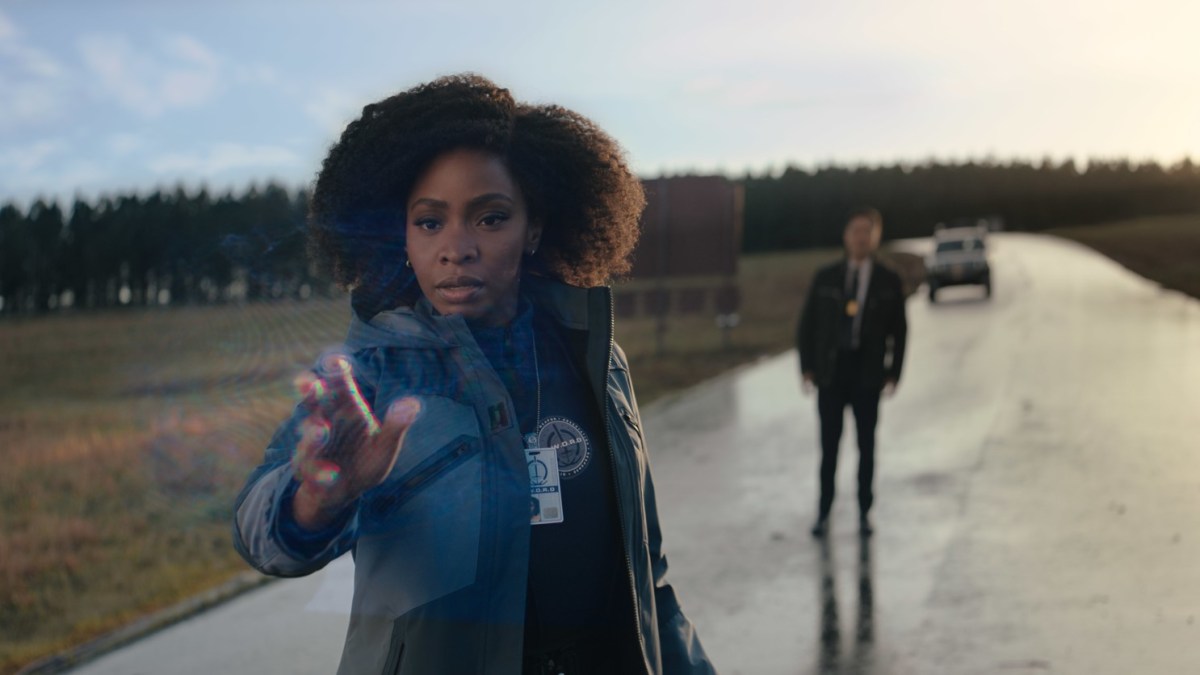 “So Monica Rambeau is basically also Captain Marvel’s daughter? Captain Marvel is a superhero who vanished in the ’80s during a test-flight and got superpowers. She thought she was an alien but she just had amnesia and then she had to fight evil Jude Law. Her movie was set in the 1990s which they showed via Blockbuster Video and Nirvana t-shirts.

“Monica was a kid then and now she’s an adult and she’s also going to be a superhero. She isn’t Captain Marvel’s actual daughter but she’s the daughter of Carol’s best friend Maria Rambeau and they were really girlfriends in everything but name onscreen. Monica’s mother Lashana Lynch is going to be 007 in the next James Bond movie which is probably why she’s been written off. No, she’s not the new James Bond, she’s 007. Anyway, Captain Marvel, Maria, and Monica had Christmas Day mornings in pajamas which we saw in old pictures. Do you see what I mean about Captain Marvel and Maria being girlfriends? I love my friends but I’ve never had Christmas Day pajama moments with them, you know?” 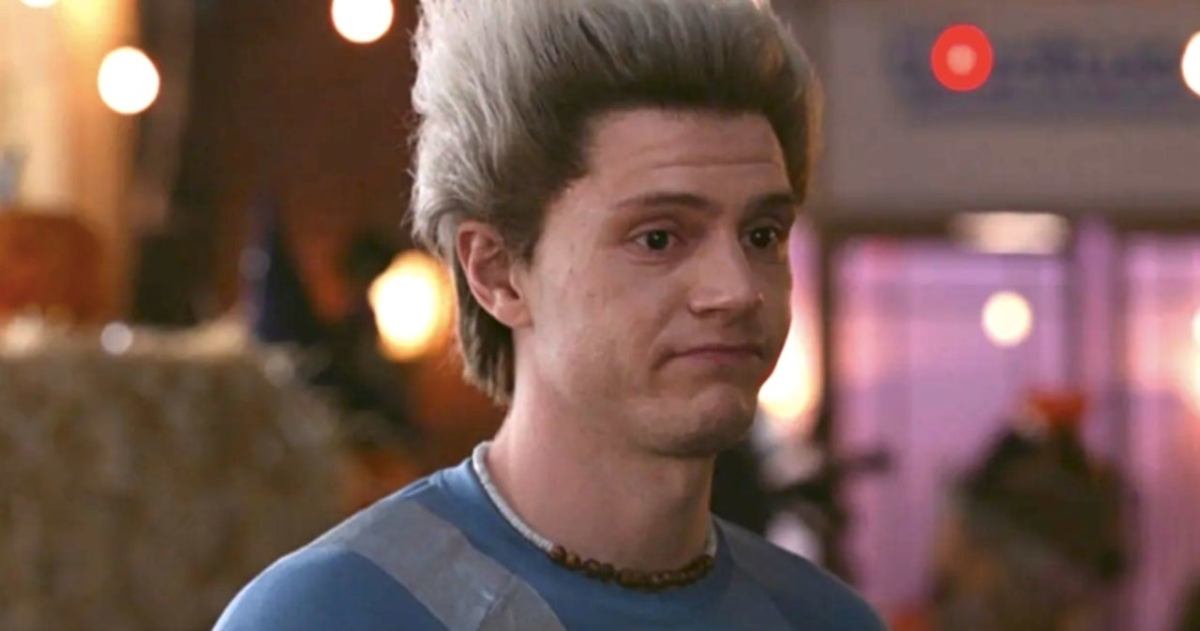 “Right so Wanda’s twin brother Pietro died in Age of Ultron, that movie I regretfully made you watch opening day that you hated, but this Pietro is played by Evan Peters, who played the character in the X-Men universe of movies. So he’s actually Quicksilver, which is what Pietro is called, in other movies, but this is a surprise appearance that was only made possible because Marvel and Disney own the X-Men now. But for a while they couldn’t even say the word “mutant” and it was super awkward. Please just trust me on this. Pietro is probably from the Multiverse, which has been in a few movies now and will be in Doctor Strange in the Multiverse of Madness which Wanda will also be in. He could also be not Pietro or, like, evil Pietro, but he’s essentially a massive in-joke. Also their dad is Magneto. Sort of.” 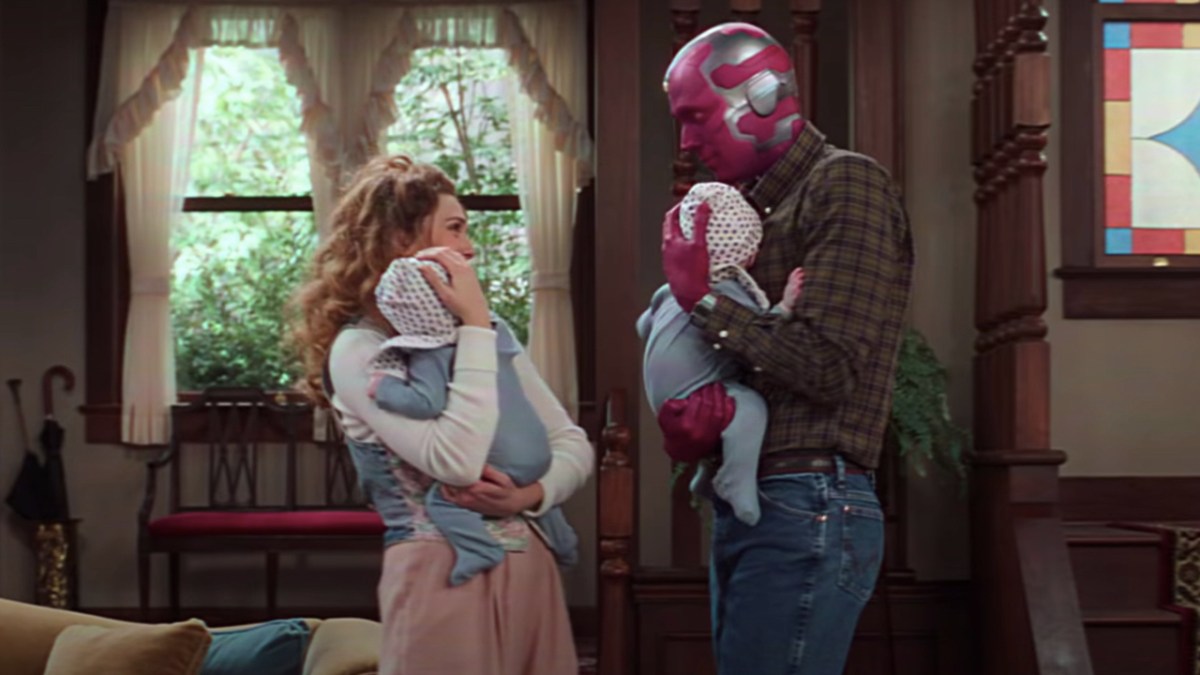 “The babies Billy and Tommy grow up to be super-important so they’re probably going to get to exist after the show. They’re part of the future of this franchise which better be a lot more queer. Billy is eventually married to Teddy, who is called Hulkling, and is a sort of alien like the ones in the Captain Marvel movie and it’s all connected. What? No, he’s not married to the Hulk.” 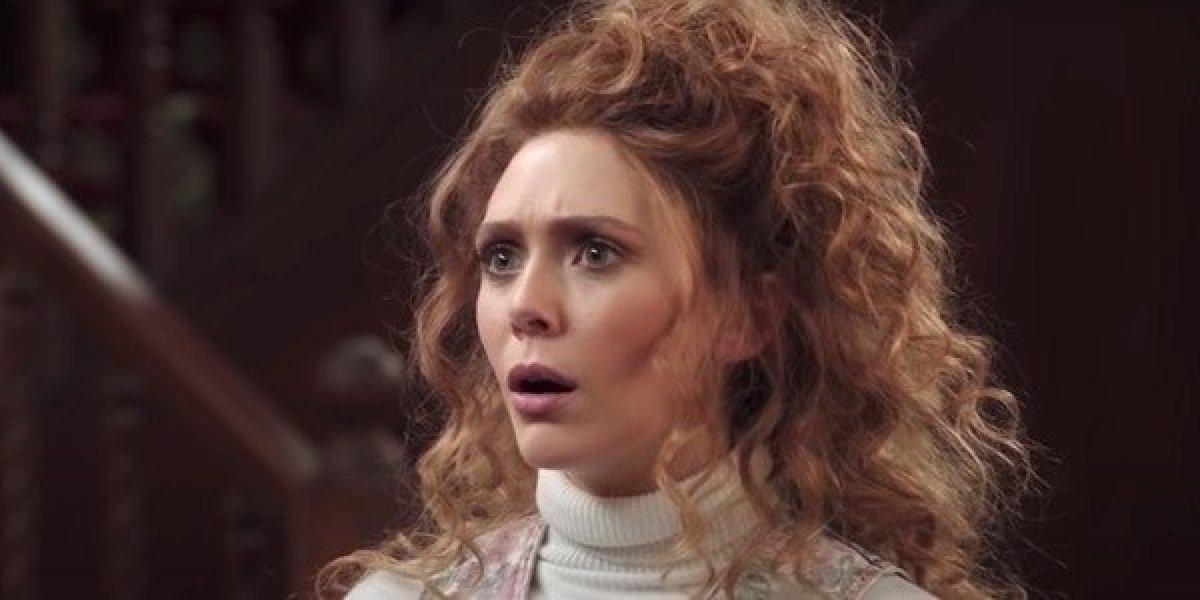 “Elizabeth Olsen is Wanda’s actress and she’s the sister of Mary-Kate and Ashley Olsen and looks a lot like them so that Full House homage we just saw briefly was, like, a direct wink at her sisters playing Michelle Tanner. I think they missed a real opportunity to bring in ALF, though.” 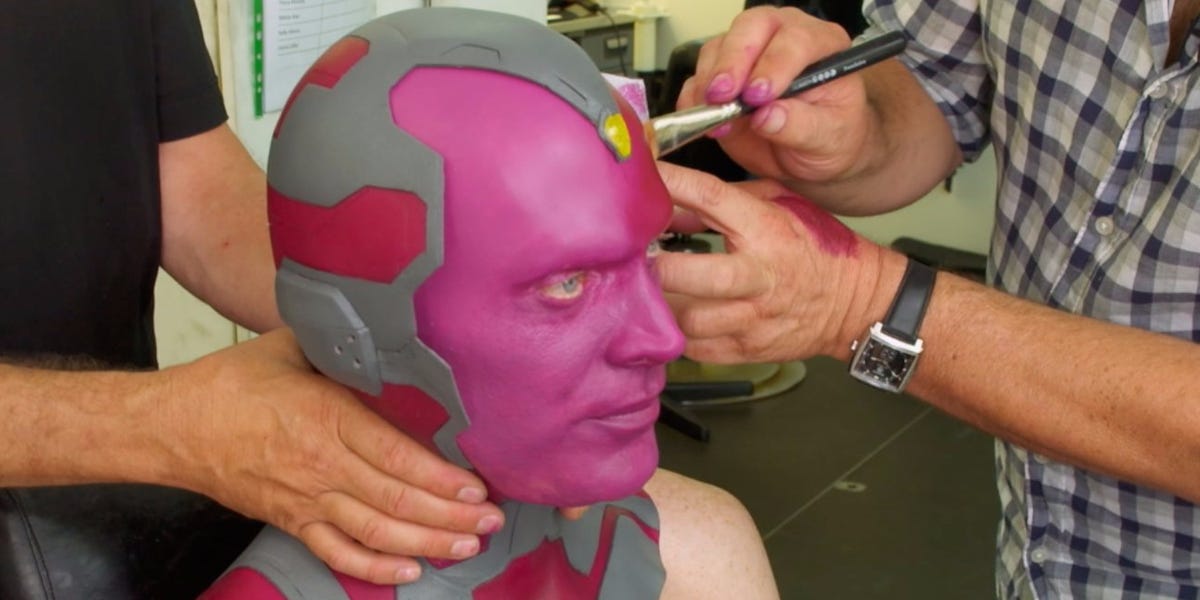 “OK so Paul Bettany signed up to voice Tony Stark’s A.I. computer system J.A.R.V.I.S., which was named after his father’s butler, and do a little light voice work. But then he got turned into a sentient superhuman computer—wait stay with me—with the help of a magical stone, the same kind that gave Wanda her powers. He and Wanda fell in love and it wasn’t really great or convincing how they did that but then she had to kill him to prevent this bad guy from getting the magic stone which was sad, but then the bad guy got the stone anyway and snapped half of the universe out of existence because he thought he was an environmentalist.

“Now Paul Bettany has to spend eight hours getting magenta makeup put on and is starring in five different surreal sitcoms but he’s doing a great job, isn’t he? And I actually am convinced of their love story now? Only if Vision doesn’t remember anything from before his resurrection why are he and Wanda in love, like when did that happen? Wait, come back!”

Are you watching or discussing WandaVision with people new to the MCU? Have you found yourself deep into some tangled explication? Has WandaVision made you realize that you are in fact a walking composite of more than a decade of movies, TV shows, comics, and factoids about actors, all of which is jumbled up in your head but still retrievable at a moment’s notice? Let’s talk WandaVision in the comments.