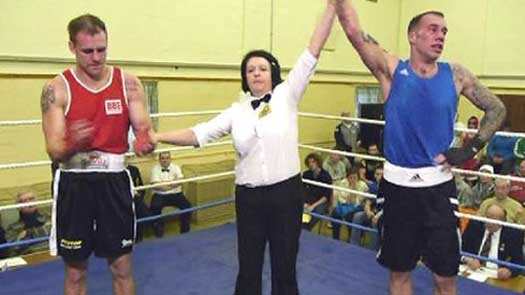 That might be one of the more unique titles I’ve ever written and I have Mandy Brown to thank. She made news recently by becoming The Welsh Amateur Boxing Association first female referee.

“Other women have sat as judges in boxing competitions but none have ever climbed through the ropes and got up close with the competitors,” according to BBC News. Brown became a fan of the sport as a young girl watching televised fights with her parents. Her future husband opened up a boxing club for the youth but there was a roadblock for Brown.

“He started training to be a judge, and Ms Brown used to accompany him to matches, but found she was not allowed at the ringside,” writes the BBC.

“I had to change that,” said Brown. “There was a recruitment drive for judges so I went along and they tested whether I could spot a blow. Then they invited me to come and sit next to a judge and see how my results compared.” The next inevitable step was to throw her in the ring itself. After that, she began training while continuing her lecturer job at Llandrillo College. The rest is history. Brown is now a Grade One national referee and plans to take the AIBA Amateur International Boxing Association qualification so she can referee international matches.

“[She] just returned from the Great Britain Junior Championships in Scotland where she became the first Welsh woman referee to oversee a GB international bout,” writes the BBC. “She travelled up with the Welsh National Squad and their coaches, who included Welsh boxing legend Colin Jones and Michael Smyth, who was the last boxer to defeat Joe Calzaghe as an amateur.”

Brown said she couldn’t believe she had the opportunity to dine with her heroes. She’s currently helping one of Wales’ first female boxers, Helen Jones, to become a judge and referee and hopes others will try their hand at it as well.

She said, “Anyone who enjoys boxing and can give up Friday nights can come along.”