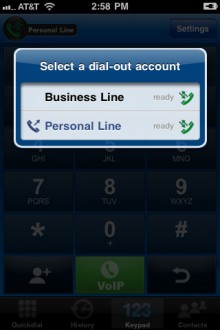 Ever give out your phone number as the result of unrelenting pressure and wish you could’ve been stronger-willed each and every time that obnoxious taste test research firm calls you? Well, there’s an app for that! iPhone App Vumber provides a handy little service that generates a temporary, working phone number which can be used then deleted at will. A service as helpful as getting that guy who hit on you at that bar off your back isn’t free, of course, and Vumber costs $9.95 per month for your first temporary number, and additional numbers cost $3.95 per month on a sliding scale.

Aside from giving out fake numbers, Vumber has a few practical uses, such as in the world of online dating. If you’re a little hesitant to divulge your phone number to the Internet, you can take solace in using a temporary number that you can easily delete if a creepo somehow gets ahold of it. The same can be said for wanting a separate work number.

The actual service works with most modern phones, though the service has recently been unleashing smartphone apps into the wild, bringing the godsend of a service to the forefront of “polite” ways to reject guys in bars.