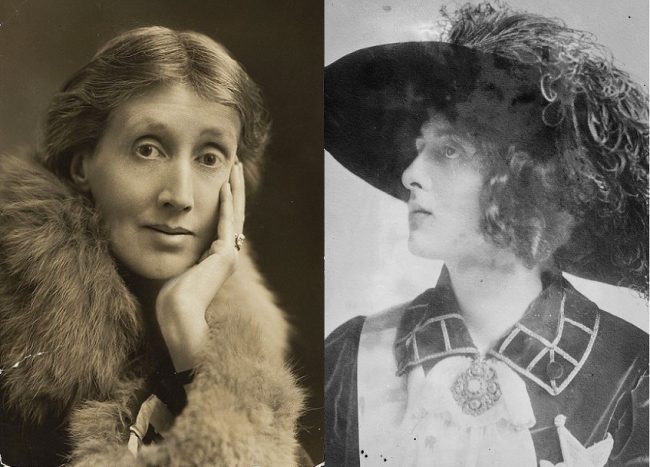 When it comes to problematic old-timey white-people relationships, the straights have…I don’t know, Elizabeth Taylor and Richard Burton? F. Scott and Zelda Fitzgerald? And the rest of us have Virginia Woolf and Vita Sackville-West. The modernist thinker/writer and prolific poet/garden designer had a decade-long affair which represented one of the most artistically and emotionally fulfilling times in both women’s lives. And it’s finally making its way to the big screen.

Gemma Arterton will star as Vita Sackville-West, and either Andrea Riseborough or Elizabeth Debicki (the IMDB page keeps shifting) will star as Virginia Woolf, in the upcoming biopic, Vita & Virginia. (Eva Green was originally cast as Woolf, but had to leave the role for other projects.) The movie is based on the stage play of the same name by Dame Eileen Atkins, which adapted “the letters Virginia and Vita exchanged and weave[d] them together into a witty, intimate conversation, telling their story in their own words.” Atkins is co-writing the film adaptation with director Chanya Button.

The film is set between 1927-1928, the period of time during which Woolf was inspired by her relationship with Sackville-West to write the modernist masterpiece Orlando. Button described the film as “a visceral love story, a vivid exploration of creativity, and an energized perspective on one of our most iconic writers…We so often associate women of the past with oppression, bound by the duties of marriage, propriety and domesticity; but what Vita & Virginia offers is an example of a relationship where bold, brilliant women bent these institutions to their will at great personal cost.”

Honestly, I don’t know if there’s anything more impossibly romantic than writing a literary masterpiece about your lover that describes her as having “eyes like drenched violets” – but if there is, I haven’t seen it yet. While Woolf had one-too-many proto-fascist friends in the Bloomsbury Group and could be a (self-admitted) classist snob, she also wrote beautifully, and achingly, about opening up to Sackville-West and experiencing two different loves, for both her husband and Sackville-West, at the same time. And their relationship is an important reminder that open marriages and bisexual people (Sackville-West’s husband, too, was a bisexual) have always been here.

Plus, Woolf and Sackville-West’s letters to each other are just gorgeous: touching, surprisingly funny, and often oh-so-pretentious. “I am reduced to a thing that wants Virginia,” wrote Sackville-West, after leaving for Trieste. “I composed a beautiful letter to you in the sleepless nightmare hours of the night, and it has all gone: I just miss you, in a quite simple desperate human way…So this letter is just really a squeal of pain. It is incredible how essential to me you have become.”

To which Woolf replied: “And ever since [you left], nothing important has happened—Somehow its dull and damp. I have been dull; I have missed you. I do miss you. I shall miss you. And if you don’t believe it, you’re a longeared owl and ass.”

(Via Variety and The Irish News; images via Wikimedia Commons)