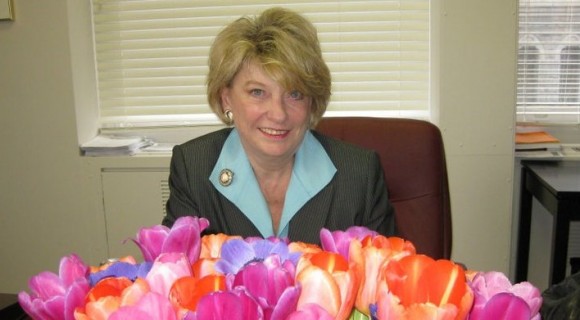 In an attempt to “even things up” while the Virginia senate debated a controversial and upsetting anti-choice bill that would require abortion providers to force women to undergo a vaginal sonogram (an invasive procedure) before going through with the procedure, State Senator Janet Howell proposed an amendment — before obtaining a prescription for erectile dysfunction drugs, men would be subject to rectal exams and stress tests. And that makes Senator Janet Howell today’s official State Senatorial Hero.

The bill, which will be voted on officially in the Republican-led Virginia state senate this week, but has already passed in a voice vote, changes the “informed consent” component to existing abortion laws (because it is still legal), and now women seeking an abortion in the state of Virginia will be subject to a mandatory vaginal sonogram (used in early stages of pregnancy instead of the non-invasive device) to determine the age of the fetus. After that is done, the women must be “given an opportunity” to look at the ultrasound image before going through with the abortion. They have the choice to decline, but not after someone is there to tell them that there is a picture of their fetus they can look at, if they want to. Because what a woman needs the chance to do once she’s made the painstaking decision to end her pregnancy in a state of limited emotional manipulation is to be vaginally probed and then emotionally manipulated.

In protest, Sen. Howell proposed an amendment that takes a look at the genital goings-on of the opposite gender. Her idea? Require men to undergo an invasive digital rectal exam and cardiac stress test before receiving a prescription to an erectile dysfunction medication. Sen. Howell explained to The Huffington Post:

“We need some gender equity here. The Virginia senate is about to pass a bill that will require a woman to have totally unnecessary medical procedure at their cost and inconvenience. If we’re going to do that to women, why not do that to men?”

A purely symbolic gesture, the amendment was rejected — by just two votes. Sen. Howell did not expect it to pass (though she was “pleased” that it still garnered 19 votes), but it raised a glaring issue concerning the role politics has been taking in our privacy and our rights to our own bodies — that anti-choice politicians do not understand or care about the women’s side of the story when it comes to abortion. Feministe points out the serious, gigantic factor that is conveniently brushed off in the abortion conversation:

Right-wing politicians have positioned reproductive rights as about abortion and babies, not as what they really are: Fundamentally tied to the body. Laws like this force that conversation; they force politicians to explain why a procedure tied to female reproduction should included legally-mandated penetration and shame, while male reproduction gets a smile and a prescription.

That said, the sole female senator who voted against the amendment — Sen. Jill Vogel, who was a sponsor of the bill — said that she could not equate erectile dysfunction with pregnancy in this case.

Now, is a digital rectal exam and a cardiac stress test the same as a vaginal sonogram? No. And erectile dysfunction is not comparable to ending a pregnancy. There is simply no male health condition that is equivalent to pregnancy and birth. So no matter what was proposed, despite the degree of invasiveness, there will always be a case of comparing apples and oranges. However, that is still no excuse for politicians to have a say in what is going on inside of women’s bodies.

If anti-choice politicians are this concerned with the comings and goings of the vaginas of strangers, then we should all just start sending them monthly journals about our periods. Since they’re so interested.