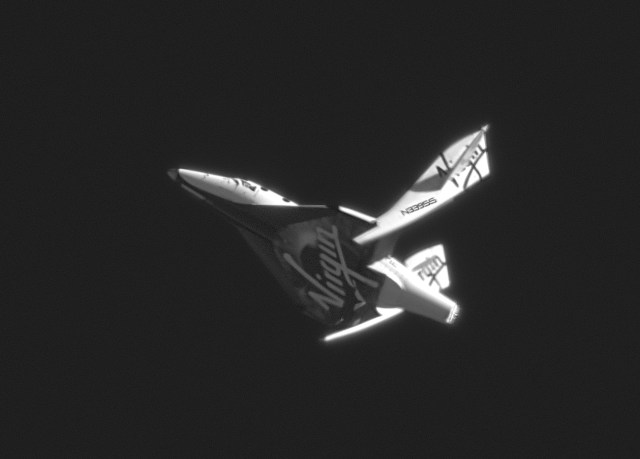 Virgin Galactic’s SpaceShipTwo spaceplane—designed for space tourism—has just crashed. Virgin Galactic has been keeping everyone apprised of the situation via Twitter:

During the test, the vehicle suffered a serious anomaly resulting in the loss of SpaceShipTwo. WK2 landed safely. (2 of 4) — Virgin Galactic (@virgingalactic) October 31, 2014

Our first concern is the status of the pilots, which is unknown at this time. (3 of 4) — Virgin Galactic (@virgingalactic) October 31, 2014

We will work closely with relevant authorities to determine the cause of this accident and provide updates ASAP. (4 of 4) — Virgin Galactic (@virgingalactic) October 31, 2014

According to TechCrunch, at least two pilots were on the spacecraft when it went down, but there have been unverified reports suggesting parachutes were spotted, so we hope for the best. WhiteKnightTwo, the vehicle that carries the spaceplane up into the atmosphere where it detaches and fires up its own rocket engine, landed safely. We’ll know more when Virgin Galactic holds a press conference at 2PM PST and update this information. Updates: #1: From NBC News: “A source at the Kern County Sheriff’s Department told NBC News that two parachutes were deployed after the anomaly.” #2:

#3: THR has received that information as well: “At 10:50 am SpaceShipTwo crashed in the Mojave desert, with one of the pilots confirmed dead and the other suffering ‘moderate to major’ injuries, Sgt. M. Singer, of the California Highway Patrol, told THR.” (via TechCrunch, image via Virgin Galactic)