Complaining About “Violent” Protesters? Start With the Anti-Abortion Ones. 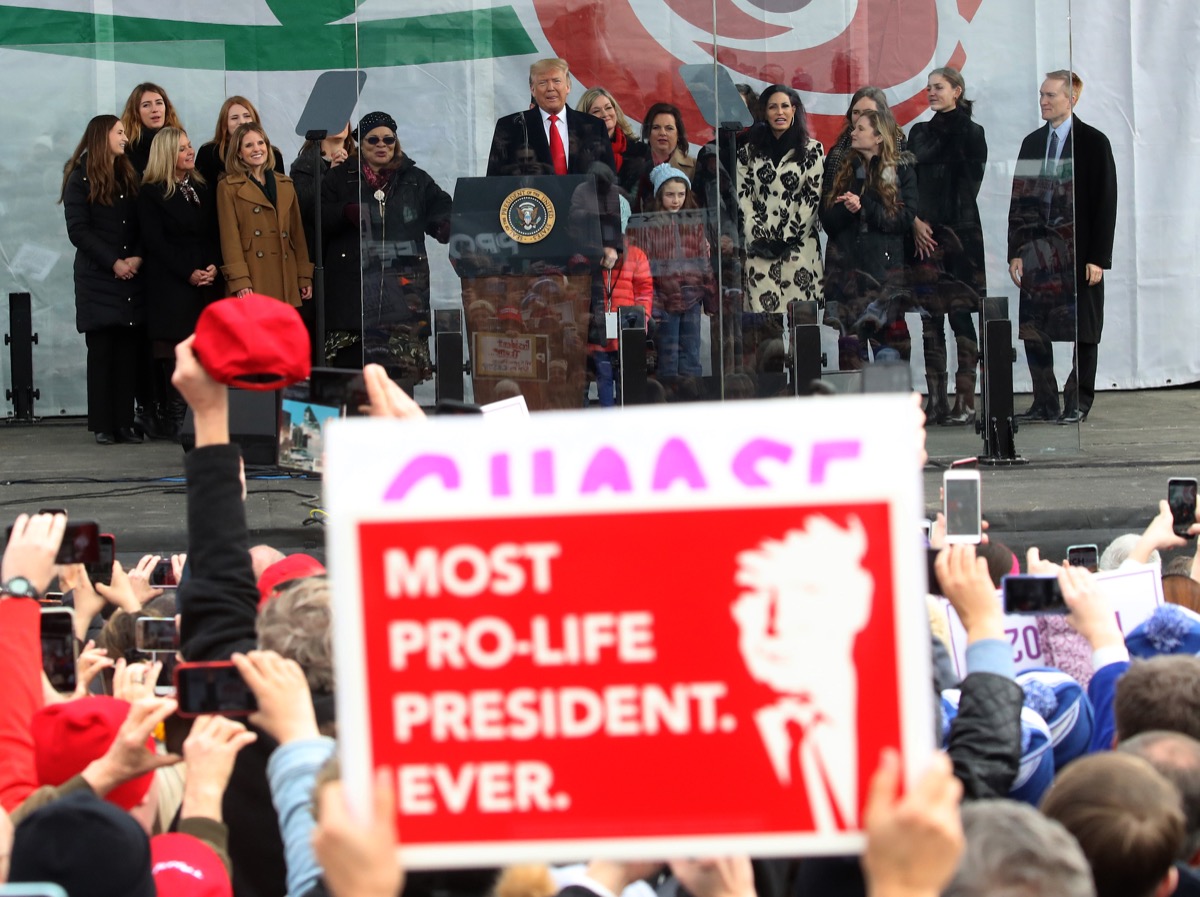 As people across the country continue to take action in protest of the violent, white supremacist police state, there’s been an increasing (and awesome) trend of crowds working together to tear down racist, Confederate and colonialist monuments. Crowds are also still looting stores like Walmart and Target, which pay starvation wages; taking over police precincts and occupying city buildings; and demonstrating in other ways that are highly visible, so therefore inherently problematic to those who would rather look away.

Interestingly, some of the most high-profile “pro-lifers” in the country—from Ted Cruz, to Donald Trump, to other leading anti-choice activists—are vehemently denouncing “violent” anti-police protesters. I say “interestingly” because, if you want to complain about violent protesters, those protesting reproductive health and abortion clinics are a good place to start.

Earlier this month, an anti-choice clinic protester made the rounds on social media for their poster reading “many George Floyds will die here today.” The co-opting of a Black man’s gruesome murder by police officers in the name of the inherently white supremacist anti-choice movement is disgusting enough on its own, but frankly just the tip of the iceberg when it comes to clinic protesters’ deplorable, racist, and violent tactics.

These are, after all, the same people who lay coordinated siege to clinics across the country on Mother’s Day (despite how 60 percent of those who have abortions already have children), for crying out loud. Clinics have literally been forced to create a specific volunteer position—clinic escorts—just to walk with patients and folks seeking care from their cars to the clinic entrance.

Contrary to their identification as “pro-life,” anti-abortion protesters who target clinics have been responsible for at least 11 murders of abortion providers in the US since 1994, while regularly committing arson, vandalism, and acts of stalking and doxxing that can expose patients who are also domestic abuse victims to violence. Even if protesters quietly stand outside clinics with signs and prayers, their behavior is still meant to intimidate, implicitly threaten, and cast stigma on a safe, everyday health procedure. This stigma directly leads to violent consequences, from attacks on clinics to dehumanizing legislation that denies women and pregnant folks personhood and autonomy.

On top of all of this, there is a long history of police protecting anti-abortion protesters over patients and clinic staff, and making patients who are people of color or undocumented feel even more unsafe. From praying with protesters outside clinics, to literally blocking patients from reaching their abortions for technical infractions, there are plenty of stories from patients, staff, and advocates about the roles police have played in supporting clinic protesters.

On top of the favors anti-choice protesters sometimes receive from police, laws to protect patients from harassment and establish buffer zones outside clinics are often blocked in the courts. Protesters call the harassment they inflict on women at these clinics “freedom of speech,” as if trying to deny pregnant people bodily autonomy isn’t the real violation of freedom.

These trends among law enforcement and the legal system aren’t a coincidence. State oppression targeting Black people and people of color extends beyond horrific killings and acts of physical violence by police, and includes everything from defunding community resources to protecting white supremacist attacks on bodily autonomy.

The majority of people who seek abortion care are women of color, and there is a pattern of clinic protesters using language to harass patients, staff or volunteers by race—including racist nonsense that Black women having abortions is “Black genocide.” The aforementioned George Floyd poster is an especially hideous reminder of the targeted, racist attacks anti-choice activists subject Black women to, building on a persistent history of eugenics and violent reproductive coercion tactics tracing back to slavery.

Clinic protesters and their defenders will either defend the killings of providers and other acts of violence as not representative of their movement, yet anti-racist Black Lives Matter protesters are never accorded the same privilege. They’ll also justify their protests at clinics and any other violent acts as efforts to “save lives,” yet you don’t see them at protests of racist police killings, or anti-war rallies.

They pretend to care about children and families, yet you never see them put the same energy they devote to harassing clinics toward organizing for paid parental leave, universal child care, health care, or gun safety policies. Instead, they’ll often organize, fundraise, and vote for political candidates who directly oppose pro-family agendas.

At the end of the day, there’s no practical reason for protesters to target clinics. They simply aren’t going to change the minds of those who have decided to seek care. If not even the myriad restrictions and barriers on abortion change someone’s mind, handfuls of morally superior harassers aren’t going to, either. While everyone’s experience is different, most people who decide to end a pregnancy don’t change their minds, and subsequently, 99 percent say they don’t regret their decision.

There are no wrong ways to protest racial injustice and white supremacy. In contrast, when it comes to other issues, like protesting stay-at-home orders and especially protesting the bodily autonomy of others, there are no right ways to protest, and the disparate ways these groups are treated is telling.