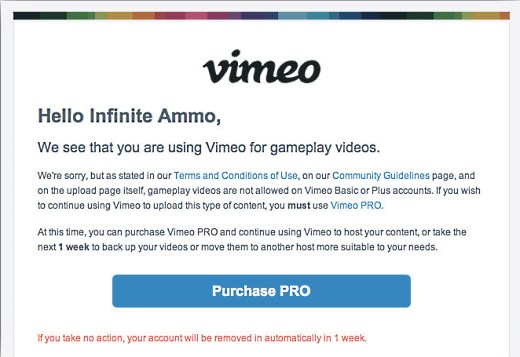 It looks as if Vimeo is cracking down on gameplay videos, in what seems like an odd move for the service. In carving out a niche for itself in a world that is dominated by streaming giant YouTube, Vimeo has taken some interesting approaches to video hosting. You can’t repost a video you found on the Internet or elsewhere, the rules regarding non-sexual nudity and nudity for artistic expression are more lax, and there is an increased focus on video ownership. Vimeo does not like gameplay videos, though.

The Vimeo Upload Guidelines definitely do say that gameplay videos are not allowed, although game developers are allowed to post progress videos, and machinima is acceptable if there is sufficient story involved. While this apparently hasn’t been a problem before, it looks like Vimeo is starting to crack down. However, there is a course of action for Vimeo users with gameplay videos who don’t want to migrate to YouTube: Pony up for $200 for a year of Vimeo PRO. That’s where things get a little weird.

If you take a look at the Vimeo uploading guidelines and the Vimeo PRO uploading guidelines, you’ll see a few differences. The big one is that having a Vimeo PRO account means that you can use Vimeo-hosted videos for business purposes (what business purposes actually are is a whole other can of worms) and you can host videos that you weren’t closely involved in making so long as you still have the rights to do so. Sounds simple enough, right?

The thing is that there is one other, minor change. The last section of the Vimeo uploading guidelines is “other content restrictions.” From standard to PRO, these are exactly the same, except for — take a guess — the bullet point about gameplay videos which is absent from the PRO listing. It reads as follows in the non-pro guidelines:

Are gameplay videos. However, game developers may post videos showing development. Machinima videos are acceptable so long as there is a story.

Now I’m not necessarily saying this is wrong and I’m certainly not saying that this isn’t well within Vimeo’s rights. What I am saying is that it seems a little weird to me that this seemingly minor detail is shoehorned in with 2 other changes which are significantly more major. Whatever their motives, there’s no reason to think that they’re playing around, so if you’re a Vimeo user with gameplay videos, you should probably back them up. This move may seem a little odd, but there’s no reason it can’t happen. That’s the magic of terms of service.