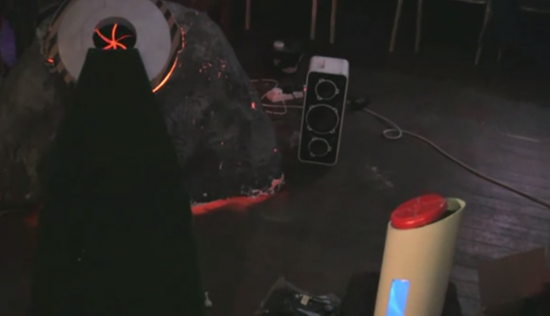 When it comes to games, you’ve got your video games, and you’ve got your everything else. Usually when there’s crossover, it’s because a non-video game is crossing over to the digital world, but in a fun little reversal, Tom Scott and friends ported some video games such as Minecraft, Portal, and The Crystal Maze to a classic physical game: Mini golf.

The 12-hole course was built as part of Scott’s 10,000 days-of-being-alive anniversary, and all his hacker pals got involved. Alongside the impressive video game-themed holes, there are some impressive  holes that have nothing to do with video games as well, including one with its own wheel of fortune and another with a Wii-nunchuck-operated ball-in-hole kind of game.

If you’re lucky enough to be located somewhere reasonably close to the Derby Maker Faire, you might have a chance to play these holes on June 3rd before they are salvaged for parts and lost forever. As for the rest of us, we’ll just have to marvel at Scott and co’s creations from afar and remind ourselves that we really aren’t that good at mini golf anyway and it would have only ended in tears. That said, footage of the course in action is an absolute delight to behold. Check it out.