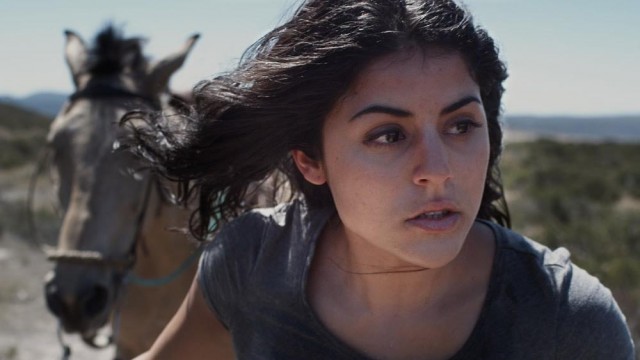 San Francisco native Veronica Sixtos has been a working actress since childhood, appearing in commercials and guest starring on TV, including family friendly programs such as Zooey 101 and Wizards of Waverly Place. But in her new film, Hostile Border, Sixtos takes on a very different role. Not only has she been given a rare leading role, but one with plenty of complexity. As credit card thief Claudia, an illegal immigrant raised her entire life to be an American, she is deported to Mexico to a country and family she doesn’t know. I spoke with Sixtos about the dark drama (out this weekend), the challenging role, and why it is a very necessary step in her budding career.

Lesley Coffin (TMS): A big part of the movie’s narrative focuses on the character’s inability to speak Spanish when she’s deported. Do you speak the language?

Veronica Sixtos: I’m not fluent and I didn’t start to learn Spanish until 3 years ago when I did this film. I knew a little and had always wanted to learn it, but it wasn’t until filming this movie that I decided to focus my attention on learning Spanish. And I actually went back to Mexico about 6 months after filming and stayed for a few months just to learn Spanish. I actually didn’t come back until they needed me to return for reshoots, and I probably would have stayed longer. But I’m still not fluent in Spanish, just conversational. But not knowing that much Spanish when I got the part and made the movie certainly helped me relate to the character.

TMS: Do you have a family in or from Mexico?

Sixtos: My dad is from Mexico, and my mom is Portuguese. My dad was originally born in Mexico and came to the United States around the age of 10, and my mom was born in Oakland, California.

TMS: Did you look for first person stories or do research on the specific experience and trauma of being raised in the United States, feeling like an American, but forced to return to a country you really don’t know or identify as your home.

Sixtos: I tried to do research and find personal accounts, but it wasn’t easy. I watched a couple of documentaries to get the grasp of what that experience would be like. But I primarily went to Michael and Kate (co-directors Michael Dwyer and Kaitlin McLaughlin), and the producer Alicia Dwyer as well, and pretty much just ask them to tell me everything they know. And they went in depth about these personal accounts, events they’ve either seen or read. So they were really knowledgable and helped me understand the character’s background.

TMS: Did they tell you the roots and inspiration behind this character and story?

Sixtos: Growing up, Michael would go back and forth from the US to Mexico, because his parents owned a home in Baja on the beach. So he went there in the summers and told me a story about a time when he was at the border and witnessed some people being deported. And he stood in line with these people and talked to them. And a majority of them knew little to no Spanish and had no idea what they were going to do in Mexico. He even invited a couple of them to come to the home in Baja to stay the night and get things lined up for the next day. So he had a very personal experience which planted the seeds for the film.

TMS: With that story in mind, when you crossed the border, were you thinking about people who might be in a similar situation?

Sixtos: I definitely thought about that, and tried to understand what that must be like on a very personal level. I tried to imagine myself in that circumstance and it is hard to imagine what that must be like. But when I actually went over the border, I think my mind was distracted because I had a bunch of weights in my bag and I was afraid that if they picked up my bag and be suspicious. Because I had 20 pound weights in my bag. So I was a little nervous about that and the idea of them going through all my stuff. I hadn’t thought about that seeming suspicious until I got to the border.

TMS: What did you think when you saw the script and she was introduced as a criminal and had that darker side presented front and center?

Sixtos: When cast, I’d just turned 21, and I saw her as a badass at first. And that excited me. To finally get a chance to play a really strong character. But now I look at her and see something in her that is far more complex. And that is very rare, at least for me. I almost never see films that have a female protagonist that has such a dark side. Usually, the women are just bad or good. And I saw this young woman who was truly in-between. She had good intentions, and that’s how I justified her behavior in order to play her. Because she justified it. She was doing the wrong thing, but she was doing it for the greater good. She needed to take care of her mother, so doing it just made sense. So looking at things that way allowed me to be more accepting of those flaws

TMS: This being one of your first leading roles and the character being front and center throughout the film, what was the casting process like?

Sixtos: Surprisingly, it wasn’t a very stressful audition, and I think I managed to do my best in the audition because I was so comfortable. The Dwyer family are just very cool and relatable people, so when I went in, I just felt their good vibes right away and felt comfortable doing the scenes. And I think I only needed to go in 2 or 3 times before they made the offer. It was a great experience actually.

TMS: Having a family at the center of film production, did that change the atmosphere during the production?

Sixtos: In some ways. The family environment really helped get the film made, because they have such trust with one another. And most of the people on the crew were close friends with Michael. So they had a lot of love and understanding on set. For me, I felt like the baby sister. I had just turned 21 and in that “wild and free” mode, so they had to pull me back every now and then. And I felt like I had a family around me for support, especially with momma Dwyer around all the time. But on set, it wasn’t that fun. We were at many different locations and most of our shoots were exteriors at night, so we had difficult hours and it got very cold. But the home base, the Dwyer home, was so fun. We were right on the beach and I had a little bungalow and they really embraced the family atmosphere. And the entire cast and crew got along.

TMS: What’s it like to work with two different directors?

Sixtos: It was a whole new experience and I think it added to the challenge. I went to Kate to talk about the scene, usually while Michael set up the scene, because he’s also the cinematographer. And Kate is the co-director and writer, so we’d talk about the character’s motivations and themes, and where Claudia’s at emotionally compared to the previous scene. And she’d give me her take on the direction she’d like to see. And then right before we shot the scene, Michael would come over and give me his direction. And sometimes they’d give completely different directions from Kate’s female perspective. But it ended up being beneficial because I managed to give a very broad range of takes, based on their direction. So I think I gave them a lot to choose from while editing. But it was a challenge as an actress to work that way, but I think it ultimately made me a much stronger actress.

TMS: Was it helpful to go to Kate first because she’s the writer and knew what she originally had in mind?

Sixtos: I would often consult with Kate because I thought she understood me the most. Michael of course understood the character of Claudia very well, but I felt that having that female connection, she understood things in a way that maybe Michael couldn’t. And Kate and I went into a lot more depth about the character, although I always trusted Michael’s vision, even if I didn’t always understand his vision. I would go to Kate for more of an emotional release and to understand Claudia on that emotional level, while Michael understood Claudia on more of a psychological level. So they ended up providing the perfect balance as a team.

TMS: Where there any scenes that were difficult to get into the emotional/psychological mindset?

Sixtos: The sex scene brought up a lot of fears. And I wasn’t sure what to expect. I definitely took a couple of tequila shots beforehand and talked things out with Roberto, who plays Ricky, privately regarding things like boundaries and what we were comfortable with. But it was hard, and it started out as something very different, and as you see in the film, it ends up being a very disturbing moment. Also trying not to judge the character of Claudia during that scene.

TMS: You mentioned this casting experience being relatively easy, but has this opened up more roles that you might be considered for?

Sixtos: Unfortunately no, but hopefully that will be in the close future. From my experience of getting auditions, they are mainly roles which are somewhat typecast. I go out on a lot of roles that have me playing a young Latina mom with an accent or prostitutes or girlfriend of gang member. But it isn’t often that I’ll get approached for a role that is much deeper than those descriptions. So I am hoping that more roles like this one comes around.

TMS: Being aware of those problems are you actively working with a team and finding advocates who are trying to put you up for roles which don’t specify being Latina or being ethnic, but broader range of roles?

Sixtos: That’s definitely one of the things I’m working on right now. And, that’s one of the primary reasons I choose this role. Because she didn’t fit into those easy character descriptions. And it gave me an opportunity to show my range, especially the fact that she really is an American and didn’t speak Spanish, that made her harder to fit into a box. And having a role like this under my belt gave people the opportunity to see me in a different light, rather than just the stereotypical roles I mentioned. And the ability to show that range will hopefully open up more and more doors.