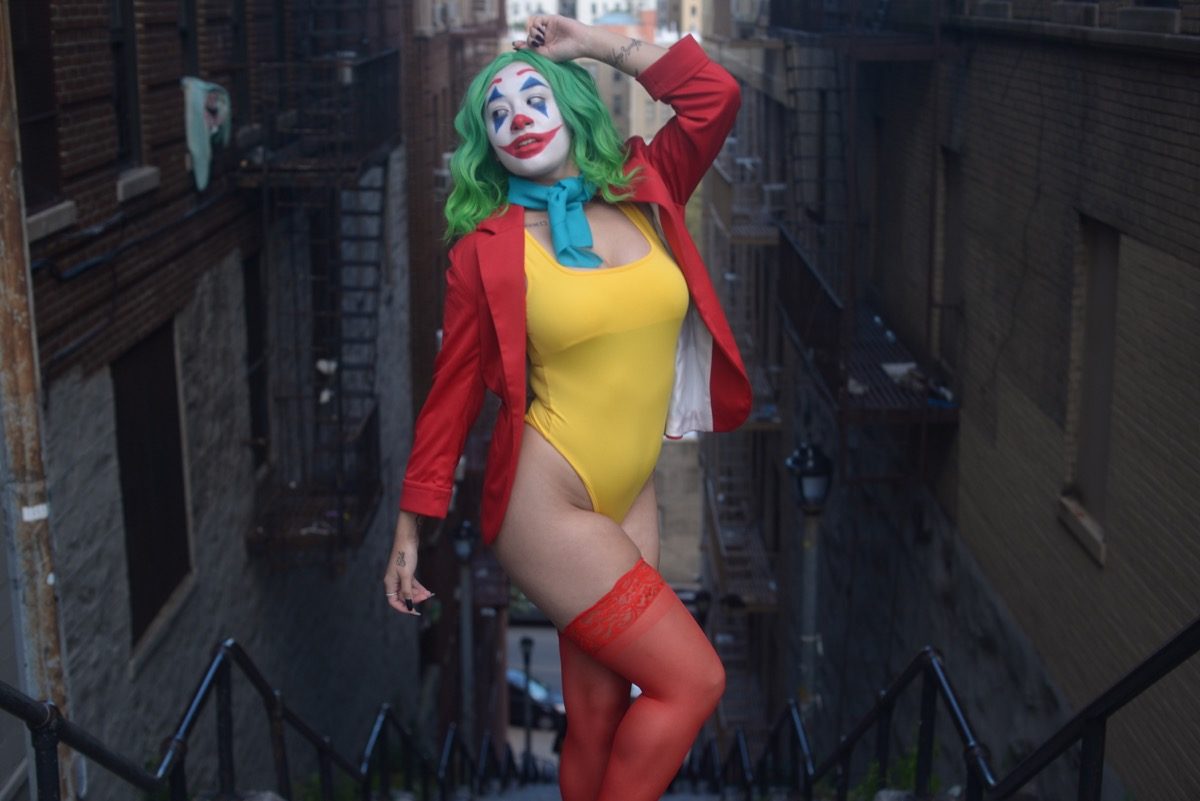 Veronica Rae, a popular New York-based cosplayer (with almost 40k Instagram followers and 28k Facebook followers), recently went viral when she posted a photoshoot of her new Joker cosplay on the now-infamous steps from the film. Unfortunately, that level of attention was the result of trolls, gamers and the “incel” community taking issue with her portrayal.

Labeling her look “disrespectful and offensive,” they accused her of “appropriating gamer culture” and being “oppressive to gamers.” (Writer’s note: HAHAHAHAHAHAHA. Whoops. Is uncontrollable, maniacal cackling also appropriating the Joker? My bad.) Some even accused her of inappropriately “sexualizing” depictions of mental illness—a lot of outcry over a costume that was essentially a leotard, a blazer, and a pair of stockings.

Fortunately, her fans, and most of the press that has already picked up on the story, have been incredibly supportive of Veronica as she deals with an onslaught of hate from (in my humble opinion) one of the most vile corners of the internet.

We spoke with Rae via email, and when asked about whether she was expecting such a horrific response from a base that already had movie theaters and critics concerned about their reaction to this polarizing film, Veronica admits that she actually was not: “Because I am a ‘smaller’ cosplayer/model and I didn’t think a bodysuit and a pair of stockings would anger thousands. But I do find it pretty hilarious because they’re STILL commenting and giving me reach. It’s been almost 6 days, and it’s all the same types of people. If people want to continue to give me attention, that’s on them.”

The controversy in the comments caused the post to go viral and, inevitably, draw attention from press outlets (which, in turn, can stir up more comments and hate. It’s a vicious cycle!), but for the most part, the press has sided with her. According to Rae, “I think the press is on my side. A lot of them are making fun of the ones who I have angered, because it is really ridiculous. The rest of the harassment is still happening due to a slew of news articles, but it’s calming down. I’ve just decided not to look at it, at all. Plus, my true fans have been there for me!”

When asked how she was coping and taking care of herself, she replied that her “methods of self care are eating well, focusing on work, and playing video games! Right now I’m playing The Witcher 3.”

She also clapped back at the hate by responding with a post in which she wore lingerie and a rubber Jar Jar Binks mask with the caption “I heard you all loud and clear. Is this better for you?” When asked about the choice, she responded, “I thought the best way to anger them even more was to post something totally bizarre and even more lewd. I was fighting with what I know best, being absurd, and it worked out pretty well. I just thought to myself, I’m not a coward and it’s clear to me that they want me to disappear. And so I will do the exact opposite.”

As for the comments accusing her of “appropriation” and “oppressing gamers,” that really drew her ire:

The fact that people are literally saying what I did was WORSE than blackface angers me. I’m an Asian American woman and I advocate against those types of racial abuse. Joker or Clown culture is NOT a thing. If they think I’m being offensive, their words are entirely worse and hurtful to many cultures that fight REAL battles everyday.

Overall, she is looking forward to future projects and “working on more Star Wars mash-ups!” (Which might open up a whole new can of worms, considering how misogynistic and racist some factions of that fan base can be!)

Quotes from our interview with Veronica Rae have been edited slightly for length and clarity.

Disclaimer: Veronica Rae is a friend of one of Brittany’s acquaintances, who introduced them for this interview.