The Verizon iPhone vs. the AT&T iPhone

With this morning’s announcement of the Verizon iPhone, many smartphone users are contemplating making the switch from their current network to Verizon. Changing carriers is no small ordeal, so customers need to decide if the shift is worth the effort. How does Verizon’s iPhone stack up versus AT&T’s?

While AT&T has been berated in the past for frequently dropping calls, Verizon is known for their rock-solid network and excellent coverage. Verizon is confident that it will be able to handle the influx of iPhone users, but like AT&T, its network could potentially buckle under the strain. Big Red may not have the raw 3G speed that AT&T users benefit from, but its next-generation LTE network has serious potential in the long run, which is important if you are signing the next two years of your life away. On the other end of the literal spectrum, AT&T plans to implement its own LTE network in mid-2011.

Disappointingly, neither version of the iPhone 4 is compatible with 4G networks of any kind. It is customary for Apple to refresh the iPhone’s hardware in June, so there is an excellent possibility of 4G-capable iPhones on both networks within the next five months.

Disaffected AT&T users who want to jump ship to Verizon need to weigh the pros and cons of such a decision: There is a lot of talk about dropped calls on AT&T, but reception varies drastically depending on the region. If you are already with AT&T and are not experiencing any problems, there is little reason to switch. But, if you are frustrated with the service in your area, there are a few ways to bail while minimizing your loss. Lifehacker has outlined a few of the techniques that you can use to avoid (or reduce) the dreaded early termination fee. Whether or not these tactics will work depends entirely on your determination and level of trickery. 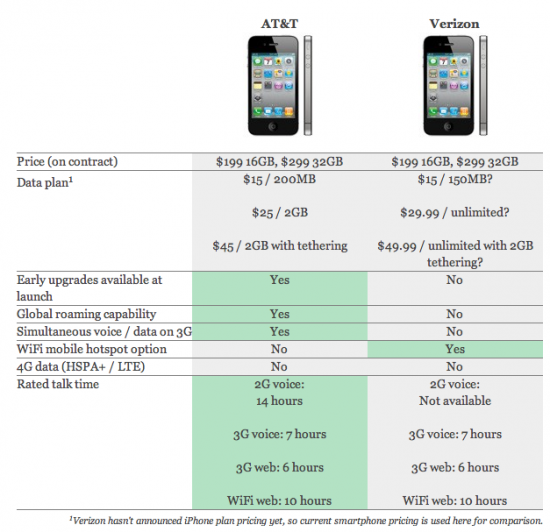 The infamous Antennagate issue seems to be resolved with the latest iteration of hardware in the Verizon iPhone, but further real-world tests will be needed to confirm. Note that the minor change in hardware renders AT&T cases obsolete for Verizon iPhones, so if you’re switching from one network to the other, you’ll need to purchase a new case.

There is absolutely no reason to switch if you are comfortable with your current network. The hardware — as well as the software — is nearly identical. Verizon hasn’t yet announced the data plan pricing for its iPhone, but if its current offerings are any guide, then the monthly cost will be comparable to AT&T. The Verizon iPhone has the ability to be used as a mobile WiFi hotspot for up to five devices, though if its current pricing structure stays the same, this feature will cost an additional monthly charge. AT&T offers Internet tethering via USB or Bluetooth for $20 per month, but this only works with one device at a time. AT&T says it is currently evaluating the option to create a mobile hotspot, but nothing has been confirmed. Due to the nature of CDMA networks, it is not possible to talk and use data simultaneously, so Verizon iPhone users will be disconnected from the Internet while making a call.

If you are eligible for an upgrade, or will be in the next few months, we suggest that you wait for the iPhone 5. The iPhone 4 was released nearly 7 months ago, which is eons in computer-time. It is likely that the next-generation iPhone will have significant hardware changes to compete with the current lineup of Android “superphones.”

The Verizon iPhone will be available for pre-order on February 3rd, and will begin shipping on the 10th.