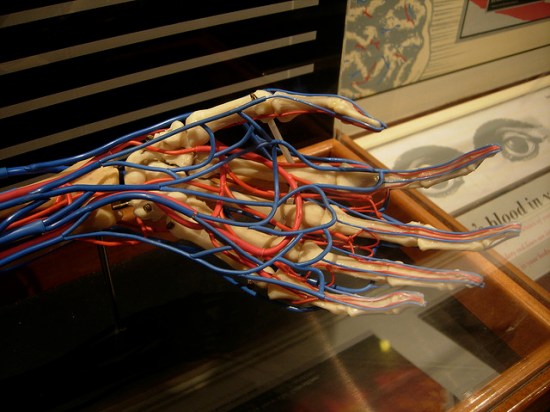 New York University’s Langone Medical Center has implemented a new method to speed up patient check-in and cut down on the number of medical errors. That method is a patient identification system that will be based on scanning the unique pattern of veins in a patient’s palm instead of requiring patients to show health insurance cards and fill out volumes of paperwork.

The vein scanners are made by the technology company Fujitsu. Using the same concept behind fingerprint and iris scanners, since no two people have the same vein configuration in their palm. The scanner uses near-infrared waves to take a picture of a patient’s palm, and then software matches the scan with the one on file in the patient’s medical records. Putting a patient’s scan into the program takes around a minute, and according to the hospital any subsequent scans only take about a second.

In an interview with Reuters, Bernard Birnbaum, vice dean and chief of hospital operations at Langone Medical Center said:

“The primary reason we actually got into this was patient safety. The benefits so greatly outweighed the disadvantages it was a no-brainer to implement.”

In the United States there are as many as 98,000 death a year related to hospital errors. Birnbaum believes the new scanning system will help the hospital cut down on any such errors. One thing that makes this system better than other means of identification is that the patient doesn’t have to be conscious at the time of check-in, which certain does happen in emergency room admissions.

Fujitsu is looking to bring the technology to other hospitals. While the idea of part of your body being scanned and converted into a code that is used to identify you seems a little futuristic and freaky if it can eliminate hospital mistakes and unnecessary death it could be extremely adventageous.

(via Reuters, photo via Wikimedia Commons)