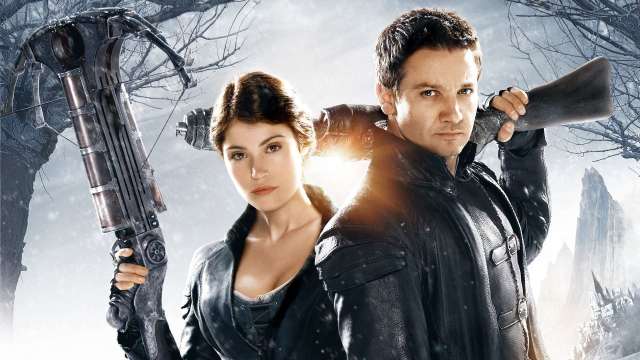 For some, Valentine’s Day is a day for love, sex, ’n’ romance. For others, it’s… not. Options include: Be Bitter About Your Love Life Day! Be Defensive About Your Lack of Love Life Day! Day Before Discount Candy Day! Or… drumroll… SATURDAY! Regardless of how you choose to live your life, not all of us will be sopping up the rom-com vibes come the fourteenth. For you lovely bastards, I present this list of ten kick-ass action movies to stream on Netflix while all your be-coupled friends are off being all lovey-dovey.

I resisted watching this movie for a long time, despite the fact that TMS’ own Victoria and Carolyn told me how schlockily delightful it is. Readers: You should do what I did not and listen to Victoria and Carolyn forever and always, because Hansel & Gretel: Witch Hunters is frakking amazing. It goes for the combo of fantasy, humor, action, and gore that Your Highness tried for, except Hansel & Gretel actually pulls it off. (One of the first scenes opens with a shot of missing children’s posters on Ye Olde Milk Jugs, so as to disabuse you of the notion that you’re watching something even remotely serious.) Hansel (Jeremy Renner) has fantasy diabetes (above) and wields a gun that’s not even trying to be subtle about how it’s designed to look like a big, veiny penis. Gretel (Gemma Arterton) takes no crap from anyone and doesn’t need a romance subplot, thank you very much. For those of you with inclinations towards the steampunkian—fairy tale versions of machine guns, turntables, and tasers!

The premise of this 2002 sci-fi actioner is the sort of thing that’s shown up in a million short stories penned in Creative Writing 101: In a dystopian future, an oppressive government realizes that the only way to stop humans from killing each other is to outlaw emotion. A Chosen White Dude (Christian Bale) realizes, hey, maybe that sucks. Equilibrium is not without its problems–there are only three female characters, and all of them are so-called “sense offenders,” or people who willfully feel feelings, because women are emotional like that. Still, if “it has problems with ingrained sexism!” were reason enough by itself not to watch a movie, we would not be able to watch like 99% of what’s out there, so I still recommend Equilibrium. The cast is great: Bale, Taye Diggs, Sean Bean. And there’s the infamous fighting style known as “gun kata” (a sort of gun fu) that is simultaneously ridiculous-looking and amazing. Imagine Voguing with guns.

I’m 99% sure Jill has weeded out all TMS readers who haven’t seen Luc Besson’s The Fifth Element by this point, but just in case, watch it, if only for Crazy Villain Gary Oldman and Chris Tucker’s Ruby Rhod.

Imagine a movie that combines the space horror of Alien with the “Yaaaaaaay, space is awesome!” exploratory spirit of Interstellar. That’s what I said: Europe Report, about a group of six explorers sent to see whether Jupiter’s moon Europa can explore life, manages to be a terrifying sci-fi story that doesn’t fall into the godawful boring “Science and technology are scawy!” trope. Looking at you, Transcendence.