The Utah Wildfires, as Seen from Space

Utah is currently experiencing several powerful wildfires: In central Utah’s Twitchell Canyon, a fire has been burning since it was ignited by lightning on July 20th, and the National Forest Service says it has burned 30,000 acres. Further north, near Salt Lake City, is the recently-sparked Herriman fire, which, believe it or not, was sparked by machine gun fire during a National Guard training exercise. While not as large as the Twitchell Canyon fire, the Herriman fire is of greater concern since it’s burning in a more populated area. As of last night, Utah officials said that the Herriman fire was 25 percent contained.

NASA has taken some remarkable pictures of Utah’s fires. Above, the Twitchell Canyon fire as photographed by the Expedition 24 crew aboard the International Space Station; below, the Moderate Resolution Imaging Spectroradiometer (MODIS)’s photo-like image of the Twitchell Canyon fire, the Herriman fire, and a third fire in Coffee Pot Canyon, which the Forest Service has allowed to continue to burn “to improve wildlife habitat and reduce hazardous fuels.” 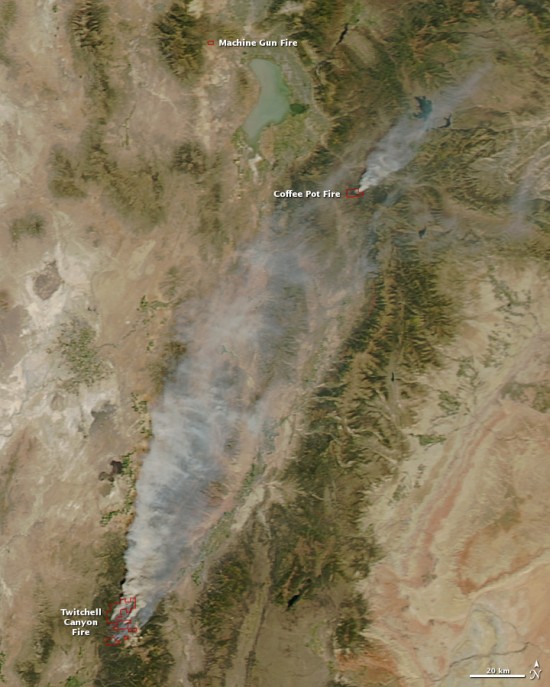