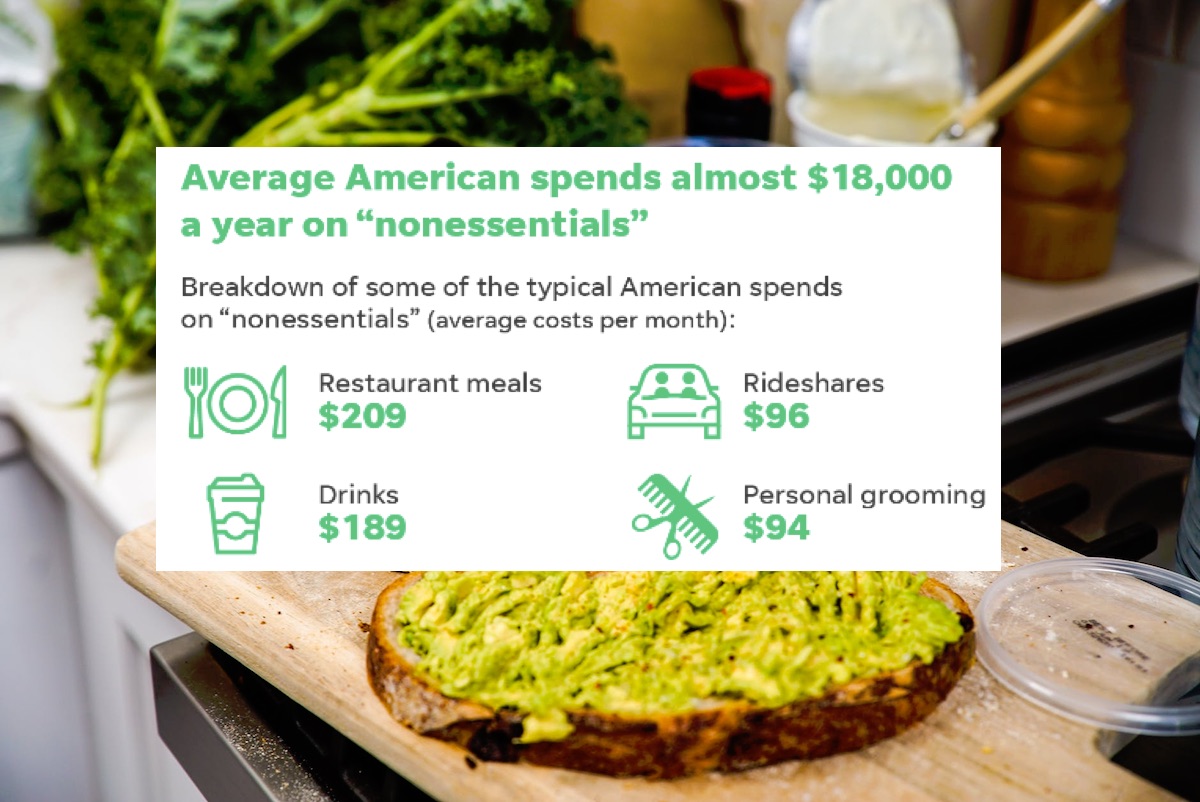 It feels as though every few months another tone-deaf tweet or graph goes out from a major brand about how economically struggling people are in that state because of spending money on, you know, being alive. The latest comes courtesy of USA Today, with a chart connected to an article that warns we’re in dire financial straits because of expenses like Netflix and food.

Writer Maurie Backman of financial services site The Motley Fool (syndicated onto USA Today) would like for you to know:

[…] the average adult in the USA spends $1,497 a month on nonessential items, according to research commissioned by Ladder and conducted by OnePoll. All told, that’s roughly $18,000 a year on things we can all do without. And that’s a lot of money, considering the extent to which Americans are letting their savings and other crucial goals fall by the wayside.

It’s true that many Americans do not have savings (the article says that 60% of adults in America could not cover a $1k expense, and also water is a thing that is wet). But I’m going to go out on a limb and say that soaring costs of living, brutally stagnant wages, and financial burdens like healthcare and student loans are to blame more than the fact that you went for a haircut or bought yourself a cup of coffee in the morning.

“You don’t need that,” chides USA Today’s headline. Maybe I’m technically capable of cutting off my own hair and never ordering a pizza to my home ever again, but is this really the way to fix a broken economy and ensure that I have savings and the ability to retire before I’m 120?

The average adult in the USA spends $1,497 a month on nonessential items. All told, that’s roughly $18,000 a year on things we can all do without. https://t.co/KQ8wxFtduQ pic.twitter.com/bpgVj94SaM

I was hardly the only one who saw something wrong with this picture. The tweet was swiftly “ratioed,” with more than 8k replies, almost all of them angry or a sarcastic rebuttal.

I’m sorry, are you suggesting that poverty is the fault of people taking care of ‘personal grooming’? Should everyone cut their own hair before they have the nerve to say they don’t make enough money?

And God was quick to point out the total fallacy of Backman’s argument: if “the average adult” were to suddenly curtail all of these allegedly “nonessential” expenses, the economy would spiral into even further flaming chaos. (Thanks, God!)

That would destroy the economy are you insane? Maybe the average adult should have more money instead of billionaires. Fuck your newspaper.

BRB trademarking “mist yourself like an air plant” for the post-apocalypse.

I do my grocery shopping online. But I thought spending $ on restaurants was bad? How do they want me to eat? Mist myself like an air plant?

Several users highlighted that eliminating these “nonessentials” would essentially remove all activities, nutrients, and pastimes.

Walk 11 miles to work, walk home, gaze at the wall while sitting on the floor eating iceberg lettuce. Got it.

Suck it up, maybe if you were wasting your money on stupid stuff like the internet and that cell phone you’d have time to get a 4th job okay

No time to find a job when you’re walking around looking for free food after a fulfilling evening of wall-staring.

I don’t know about you, but I’m having trouble keeping the patronizing advice on why so many people are struggling and how to fix it straight. Am I not indulging enough and thus killing industries, or is the reason I can’t ever buy a home because of an indulgent breakfast fruit?

Millenials spend too much and not enough at the same time and are also spoiled and also choosing to live in pods. We can’t afford a house but we can afford pounds and pounds of avocado toast.

Exactly. Unless… we make a house built out of avocado and toast!

Now you might argue that gym classes are an essential component of staying healthy, and rideshares are a means of traveling safely. But many of these costs can easily be minimized or eliminated without affecting your well-being. Take restaurant meals, for example. If anything, they tend to lead to overeating, and at more than $200 a month, they’re eating up a large chunk of the average American’s income.

Screw your health and safety! But since they can’t think of ways to cut those particular expenses without spelling “WE’RE MONSTERS BORN OF LATE STAGE CAPITALISM” in the margins of the newspaper, they’re going to instead shame you into the presumption that you’re overeating if you dare attend a restaurant.

Don’t worry, there’s an easy way to “bridge the $1k gap” of achieving a mythical three months of saved living costs in a mere month just by cutting out all of your food and drinks. I’m not sure how much Maurie Backman thinks many of us are making per month, but this would … not work. In the meantime, you should probably cancel your gym membership and Netflix in order to retire.

For example, if you’re $1,000 shy of having three months of living costs in the bank, you might cut back on restaurants, drinks, lunches and takeout for a month or two until you’ve bridged that gap. From there, you might slash two of those expenses to pay for a life insurance plan, and cancel a streaming service or two and your gym membership to eke out money for a retirement account. It doesn’t matter which expenses you cut, as long as you’re getting yourself into a better spot financially.

But if you’re already well-off, indulge away! This is America!

Of course, if your savings are robust, you don’t have unhealthy debt and you’re able to consistently fund a retirement plan and pay for the right insurance, then by all means, spend $18,000 a year on nonessentials if you can afford to.

If you’re looking for the defining tweets of our times:

— Millenials Are Killing Centrism (@maddsurgeon) May 8, 2019

Curious, isn’t it, that we so rarely see such a thing—shaming, blaring graphs about the mega-rich and what “nonessentials” they’re “wasting” their money on, instead of, say, improving the lives of their workers if they’re CEOs or business owners, paying a fair tax rate, or giving to charity.

The average person, struggling to make ends meet, juggling bills and loans, and occasionally enjoying a beverage or a trip to the gym or a TV show on Hulu, can barely conceive of how much money these people have and often actually waste. I know I actively force myself not to think about it out of self-preservation. Or else I’d be building a guillotine out of scavenged parts, since wood and metals at Home Depot would be too much of an over-the-top expense.