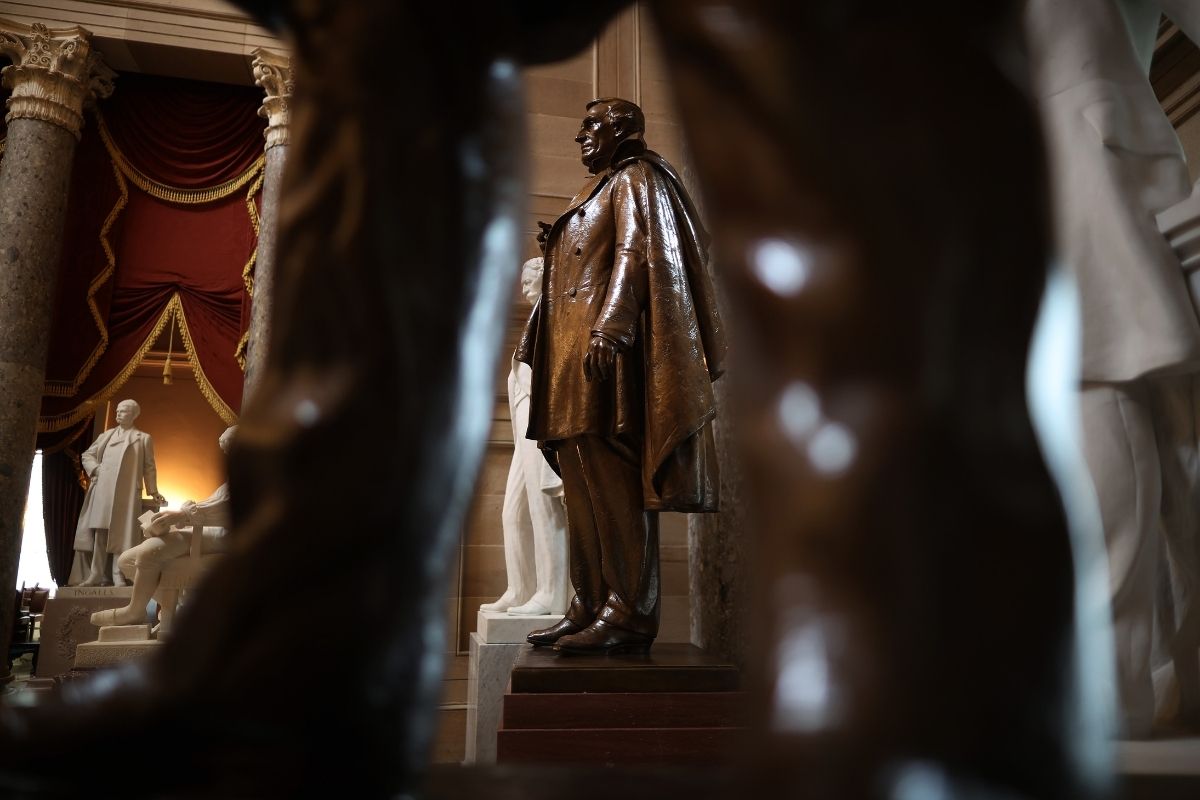 The U.S. House of Representatives voted to remove all Confederate statues from the heart of our democracy this Tuesday. The measure, which passed 285-120, saw Democrats supporting the removal while all “no” votes came from House Republicans—no shocker on the latter part of that statement. But we’d still like to see this overdue change happen inside of the Capitol Building, tearing down these monuments to nothing but racist violence.

“My ancestors built this building,” Rep. Karen Bass, D-Calif., said according to NPR, before the vote actually went down. “Imagine how they would feel, knowing that more than 100 years after slavery was abolished in this country, we still paid homage to the very people that betrayed this country in order to keep my ancestors enslaved.” And she’s right. It’s disgusting to keep the busts or statues that pay homage to those who caused damage, pain, and suffering to so many people.

This House bill would require the Joint Committee on the Library to “remove all statues of individuals who voluntarily served the Confederate States of America from display in the United States Capitol, and for other purposes.” That includes Jefferson Davis, president of the Confederacy, a steadfast supporter of slavery who “advocated for the extension of slavery into the new Western territories and the protection of slaveholder’s property rights,” according to History.com.

H.R. 3005 directs Roger Brooke Taney, who authored the Dred Scott decision, to also be removed. According to Britannica, Cheif Justice Taney “ignored specific grants of power in the Constitution” and came to the Dred Scott decision where African Americans “were not and could never be citizens of the United States” on March 6, 1857. They also weren’t entitled to their freedom even if they lived in a state where slavery was illegal. This decision also called the Missouri Compromise unconstitutional and “added fuel” that pushed the U.S. closer to civil war.

According to NPR, this bill specifically mentions Charles Brantley Aycock, John Caldwell, and James Paul Clarke, as well. All three men defended slavery and segregation. Aycock in particular spoke frequently for white supremacy campaigns, according to NCPedia. Caldwell spent his life’s work trying to keep slavery and defended it as a “positive good,” according to Britannica. And Clarke fought for white supremacy during the Civil War and afterward.

“The halls of Congress are the very heart of our democracy,” House Speaker Nancy Pelosi, D-Calif., said on the floor ahead of the vote according to NPR. “The statues that we display should embody our highest ideals as Americans, expressing who we are and who we aspire to be as a nation. Monuments to men, or people who advocated cruelty and barbarism to achieve such a plainly racist end are a grotesque affront to those ideals.”

The passage of legislation for the removal of these Confederate statues was immediately met with disdain from, you guessed it, Republicans who feel like their history is being replaced or erased. And personally, I don’t get it. Why would you want to claim a history that dehumanized, tore down, and tortured Black people? Why would you be proud of that? That isn’t a history worth defending, and those that do back these Confederate statues staying in the Capitol building are showing the world their true colors and where they stand when it comes to our dreadful and disgusting past.

This isn’t the first time legislation like this has passed in the House only to go nowhere without support from Senate Republicans, so we’ll have to wait and see what becomes of it this time.