River Song will be so disappointed. 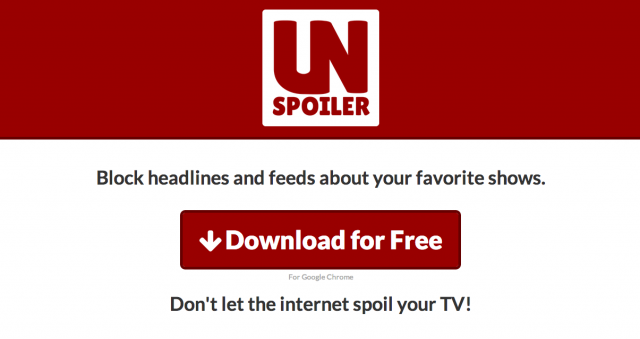 Designed for Google Chrome, Unspoiler allows you to enter keywords and phrases related to the shows — or for anything, probably — that you don’t want to show up and ruin your day while you’re surfing the web. Flagged material is hidden under a red bar, and you can click the button to reveal stuff if you dare.

It should be noted that the algorithm Unspoiler uses isn’t exactly perfect — it’s not a human, so it’s going to mess stuff up. For example, if you direct it to keep Game of Thrones spoilers away, and then you happen to google “red wedding,” there are a lot of extremely relevant, extremely spoilerific pages that Unspoiler doesn’t hide for you. It also has a hard time on sites like Tumblr, which can spoil things through images rather than text. Overall, however, it seems to do a pretty decent job of keeping the biggest reveals out of reach, so long as you don’t do anything stupid like, you know, google “red wedding.”

Currently it does not seem like the developers have any plans to expand the app beyond Google Chrome, so you’ll need that in order to use Unspoiler. There isn’t an app like this for real life, either, short of plugging your fingers in your ears and shouting “LA LA LA” everywhere you go for the rest of your life. So you’re on your own there.