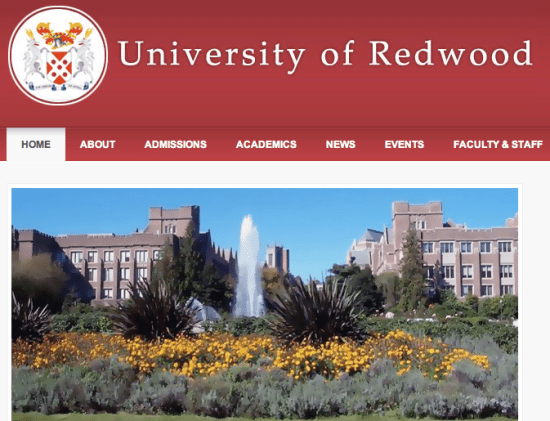 Starting a new university might seem like a huge endeavor: You need to gather many millions of dollars, hire a qualified faculty, find and pay for a campus, and set up an infrastructure capable of serving the needs of thousands of students. But a “school” called University of Redwood found a much simpler way to come into being: Copy every photo and bit of information about Reed College, a (real) liberal arts school in Oregon, replace Reed’s name with its own, and watch the application fees roll in.

The apparent point of this whole endeavor, according to the Wall Street Journal, is to convince overseas students who are less familiar with American colleges to apply. When they apply, they pay a fee; then, the school sends rejection letters to every applicant and pockets the fees. It’s a lot cheaper than hiring professors.

The plagiarism is pretty blatant. From Reed College’s About Us page:

Reed College was founded in 1908, and its first classes were held in 1911. Reed is named for Oregon pioneers Simeon and Amanda Reed. Simeon Reed had been an entrepreneur in trade on the Columbia River … Amanda Reed followed that suggestion in her will by setting up a board of trustees to found an institution of learning in Portland, with no limits other than an insistence on equality and secularism. In the ensuing years, Reed College has become one of the nation’s pre-eminent institutions of the liberal arts and sciences.

From “University of Redwood’s”:

University of Redwood was founded in 1908 and was operational in 1911. Redwood is named after the Oregon pioneers Simeon and Amanda Redwood. Simon Redwood had been an entrepreneur. He wished his wife to devote some portion of his property for the purpose of prosperity and happiness of the inhabitants of Oregon. Amanda Redwood then set up a board of trustees to found an institution of learning in Portland, with no limits other than an insistence on equality and secularism. In the ensuing years, University of Redwood has become one of the nation’s prominent institutions of the liberal arts and sciences.

Unsurprisingly, Reed College and its faculty aren’t too happy about having their very existence plagiarized by a fake school: The site was actually discovered by Reed professors Googling themselves and finding all of their personal information ripped to University of Redwood’s website. GoDaddy initially took the University of Redwood website offline when Reed complained, but put it back up after concluding that the “allegedly infringing material was removed.”