There’s a New Con In Town: Black Girl Nerds and The Black Geeks’ Universal Fan Con Has Inclusivity Built Into Its DNA 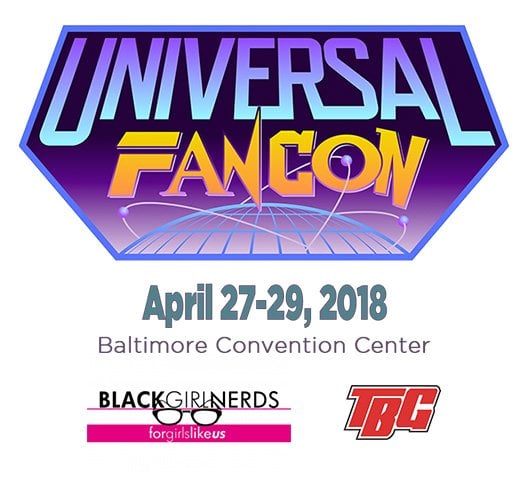 While conventions have gone from being strictly “comic-cons” to incorporating all aspects of pop culture, sadly too many have failed to be equally inclusive of the varied races, ethnicities, gender identities, sexualities, and body types/physical capabilities that make up the geek community. While most conventions have “diversity panels,” and marginalized communities have been forced to create their own specific cons, none consider inclusiveness from the ground up. Black Girl Nerds and The Black Geeks are looking to change that.

Enter Universal Fan Con, which comes to Baltimore, MD in April of 2018, and is “the very first large scale multi-fandom convention dedicated to inclusion.” Black Girl Nerds’ Jamie Broadnax and The Black Geeks’ Robert Butler noticed a lack of diversity at cons and decided to do something about it by creating the kind of con they want to see.

UFC is a three-day convention that aims to be a 24 hour convention, meaning that all day and night there will be a panel or event running for the entire show. According to a statement from UFC, Butler says that “UFC hopes to fill the void of Diversity and give fans the chance to see the geek community through a diverse set of eyes. We felt that the only way to ensure that as many groups as possible were represented, we have to keep it going,” Now, that’s commitment!

I spoke with Broadnax and asked her what the difference is between this con and conventions like GeekGirlCon, or BentCon, or Flame Con, all of which have “diversity” as part of their mission statements. Broadnax replied:

“What will make this different is first the creators behind this con have media platforms already steeped in being diverse and inclusive. So this is our wheelhouse. And second what we plan to offer as opposed to other cons is an inclusive experience for all kinds of fans. Not just a con focused on one particular group. There are cons with a primary focus on women but create the messaging around inclusion as well as cons for LGBTQ that do the same thing. We are focused on women, LGBTQ, people of color and the disabled and providing these groups opportunities to have a platform where they can be heard, as well as geek out with other like-minded nerds within their respective communities.”

What’s intriguing to me is the top-down, inside-out approach to inclusion that this con is attempting. UFC isn’t simply imposing inclusion on the already-existing convention structure as an afterthought. It’s seeking to create a new structure that has inclusivity baked into its DNA. Even the parties, usually the most “exclusive” environments at any con, will strive to make inclusion their mission. I may have to take a trip to Baltimore in 2018!

Want to help make Universal Fan Con happen? They’re currently running a Kickstarter, should you choose to back it. Universal Fan Con will be at the Baltimore Convention Center April 27-29, 2018. Start getting excited!