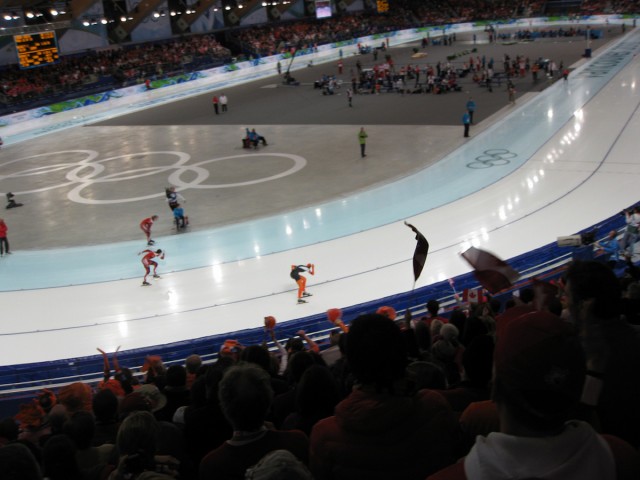 The folks at Under Armor tried to use science to create the world’s fastest uniform for US speed skaters, and it appears they may have accidentally done just the opposite. US Olympic speed skaters are falling well below the placements they’d expect, and blame is falling on the suit. When they lose at video games, I bet their controllers are also “broken.”

Like any good competitor, the US team started analyzing data after their unexpected losses yesterday, according to the Wall Street Journal. In an unexpected twist of fate, they discovered that the high tech suits the team was wearing had a design flaw that may have been responsible. The suits were designed with vents on the back to release heat, which sounds like one of those design selling points on a fancy sports shoe that you never really notice in reality, but it looks like the vents may actually have been letting air in and creating drag.

According to sources within the team, the drag was causing skaters to feel like they were “fighting the suit,” and it kept them from being able to maintain the steady, low body position that the sport requires for maximum speed. Still, some of the athletes were more graceful in their losses and didn’t want to blame any outside factors.

Gold medal favorite Shani Davis, who finished 8th in the 1,000 meter despite trouncing everyone in the sport’s recent World Cup, said, “I would like to think that it’s not the suit. I would never blame the suit. I’d much rather blame myself. I just wasn’t able to do it today, but other people were.”

While Brittany Richardson, who finished 7th in the 1,000 meter despite having the vent panel patched up after concerns, said, “Other countries are just getting really fast,” not everyone is convinced that the athletes’ troubles are all their own fault. The designer of the Dutch teams suits said that he tried a similar venting system, and they had the same problem with air intake and drag.

Either way, there were multiple factors involved, like the team’s training altitude and, most importantly, the speed of the other competitors. Still, Under Armor has promised to “move heaven and Earth” to make the suits live up to their “fastest in the world” promise. Six long-track speed skating events remain, so we should get to see how big of an impact the suit really had on the earlier placings.