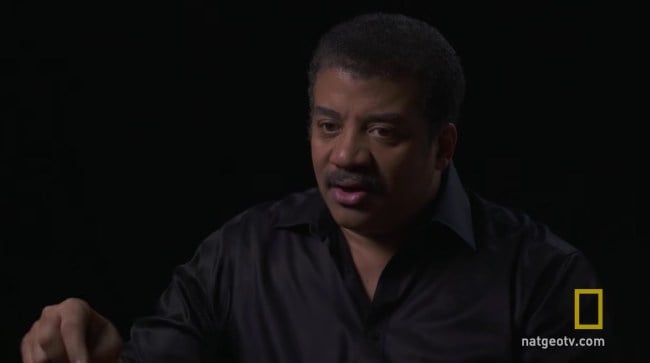 Last week, I had the opportunity to speak to scientists like Neil deGrasse Tyson on National Geographic’s “yellow carpet” for their FURTHER Front presentation about upcoming specials and series. Considering it was just days before the March for Science, it felt right to talk about why the average person should care about things like space exploration, oceanography, and the work of the scientific community.

Tyson, who is every bit as energetic and delightful as you’d expect, told me he had a “slightly unorthodox outlook” on that question. “I think it’s important,” he told me, “but I will not require that of you. Instead, what I will say is, here is the cost of you not exploring and the benefits of you exploring.” Essentially, you’re within your rights to not care, but don’t pretend that the consequences aren’t real. The astrophysicist has been very outspoken about the dangers of science denial, something he’s actively working against as a science personality.

One argument against space exploration, the StarTalk host points out, is the question of “Why explore in space when we have problems here on Earth?” In response, Tyson paints for us an image that we jokingly referred to as his Allegory of the Cave.

“Let’s imagine we’re all back in the cave, so go back into the cave. We’re sitting around the fire and somebody’s injured or has problems and someone says, ‘I want to go across the meadow to that mountain.’ Other people in the cave say, “No leaving the cave until we solve the cave problems first. We have to solve these first before anybody leaves the cave.”

Tyson pauses for a second, and says, “That is clearly an embarrassingly short-sighted view for any community to have.” He points out that as “we are clamoring for resources on this speck we call Earth” or “fighting over a line in the sand where the buried energy sources are or access to resources that are dwindling,” people overlook how space can be a solution.

“I look out in space with its limitless energy. And everything that’s rare on Earth—common in space,” says Tyson. “You know rare earth elements, you might’ve heard of them? There are asteroids where they are not rare. They’re common.”

Space science and exploration can feel like something very removed or distant from the regular lives a lot of us live, but that’s truly not the case. Addressing the “stay in the cave” crowd, Tyson concludes, “If our conduct on earth is driven by access to resources that are unlimited in space, for you to say, ‘Let’s not explore’ means you have not thought about the problem as broadly as you can and should.”

(Image: screencap)
Want more stories like this? Become a subscriber and support the site!