Got a Big Living Room? Here’s a 75% Complete Tyrannosaurus Skeleton up for Public Auction 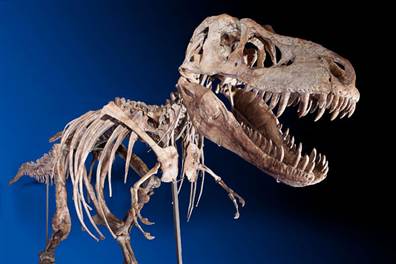 Okay, remember this morning when I said that a four thousand dollar rotating ring made out of meteorite with inlaid gems representing the planets of the Solar System would be the most expensive thing that I felt a desire for today?

Well, I lied. Because I hadn’t yet seen that there’s a phenomenally complete Tyrannosaurs skeleton going up for public auction soon, and it’s valued at $95,000.

What could possibly be the downside, you ask?

Well, on the one hand, it’s not a Tyrannosaurus Rex, so Sue, the Chicago Field Museum’s resident dinosaur twitterer and the last nearly complete skeleton of the family Tyrannosauridae to be put on auction shouldn’t feel that her value will be threatened. (She went for $8.3 million in 1997) It’s the Rex (a native of North America)’s Mongoliod cousin Tyrannosaurus Bataar, also known as Tarbosaurus.

On the other hand, if, as some experts claim, it’s literally a relative of the T. rex and not just figuratively one, Tarbosaurus might be abandoned as a genus all together in favor of lumping both under the heading of Tyrannosaurus Rex. Skeletons of any theropods are exceedingly rare. As the apex predator of their era, there were understandably few of them hanging out there at the top of the food chain, being supported by the rest of the ecosystem. There are very, very few complete Tyrannosaurus finds in history, and, as David Herskowitz, director of Natural History for the auction house in charge of the sale, rightfully says, it’s even more rare that any of them find their way to public action, and even more rare that one would get there after having been excavated, cleaned, and even mounted for display.

That’s right, the skeleton is already mounted. See! Perfect for your twelfth floor one bedroom. Of course, once you purchase it you’ll still be explaining to guests that it’s not technically a Tyrannosaurus rex. Better use the change you get after paying for the auction to start funding theropod research.