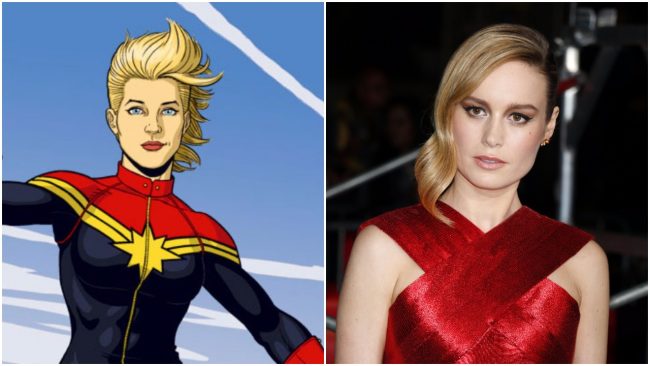 This week, there was a lot of buzz about Captain Marvel: reporters visiting Marvel Studios got to see possible mockups of her costume. The directors of the film were chosen. But as I sit here on a Friday afternoon reading an interview about Brie Larson’s prep to play the character, the yawning infinity of time stretches out before me. Who knows if Earth will even survive until this film is released? So many calamities could wipe us out before Marvel manages to get its shit together and make a movie with a woman at the forefront.

Captain Marvel is slated for March 8, 2019. By then we might all be dead in a nuclear war. Or Donald Trump could be impeached and Mike Pence the President. Considering the term “President Mike Pence” just make me think favorably of nuclear war. But what we know for sure is that it will be at least two years until Captain Marvel and in the interim, we’ll be seeing the release of six more Marvel movies starring men primarily named Chris.

I know I’m hardly the first to spill ink and vent frustration about Marvel’s failure to get a female-led superhero film developed faster. I mean, even DC is beating them in this regard. DC. DC’s giving us Wonder Woman and Harley Quinn is likely the only enduring cultural takeaway from Suicide Squad. DC, Marvel. Zack Snyder’s agenda is winning.

Meanwhile, Marvel has had Scarlett Johansson, the most bankable movie star in the world, playing freaking Natasha Romanov as part of an ensemble and as a sidekick and as one half of the most misguided attempt at a romantic pairing in superhero history (I’M LOOKING DIRECTLY AT YOU, JOSS WHEDON, EVEN IF I HAVE FORCIBLY WIPED AGE OF ULTRON FROM MY MEMORY BANKS).

The failure to create a Black Widow movie years ago is just a catastrophic mistake and makes precisely zero sense. Not to mention the immense and storied stable of incredible, nuanced female characters Marvel has in its canon. You’re telling me none of them were considered before Ant-Man or the at-the-time obscure Guardians?

So what did we get, at last? The promise of a Captain Marvel movie. Carol Danvers! A fan favorite. A badass, glorious, take-no-prisoners female. A blessed announcement. And then the casting of Brie Larson, who seems to be pretty much perfect for the role. A+. But Marvel, which is capable of moving at quite a clip, seems to have serious lag where Captain Marvel is concerned.

The movie was first announced in October of 2014, when I was young and unafraid. Obama was still President and Britain was part of the EU and climate change was regarded as real by the government. That’s a five-year-span from the announcement of Captain Marvel to its release. If it’s even released on time. The directors were just announced this week, more than two years after the movie was confirmed.

I guess I’m tired, friends. I think about it being two more whole years while we slowly get spoon-fed more and more tidbits about Captain Marvel and get pumped over costumes and more casting and someday set pics and trailers and goddammit, I know how thrilled I will be as these events occur. But I’m already exhausted.

And I can’t help thinking about how this should have happened so much sooner. And that even as I may get to report more on Captain Marvel in the future, I’ll be writing a lot more first about Guardians of the Galaxy Vol. 2, Spider-Man: Homecoming, Thor: Ragnarok, Black Panther (yay), Avengers: Infinity War, and Ant-Man and the Wasp (nice try getting the lady into the title there, Marvel, but she’s still sharing the bill) until it’s finally, finally Carol’s solo turn in the spotlight. Anything could happen between now and March 8, 2019.

Why was the priority in Marvel’s development chain directed towards getting, say, the third Thor movie to the big screen before a female superhero received her own movie? Black Panther represents a huge step forward in terms of diversity and I couldn’t be more excited for it, but what’s the over/under on Marvel announcing a woman of color leading a superhero film anytime soon?

Ultimately, I just want to live to see these movies happen. These days, nothing feels guaranteed.