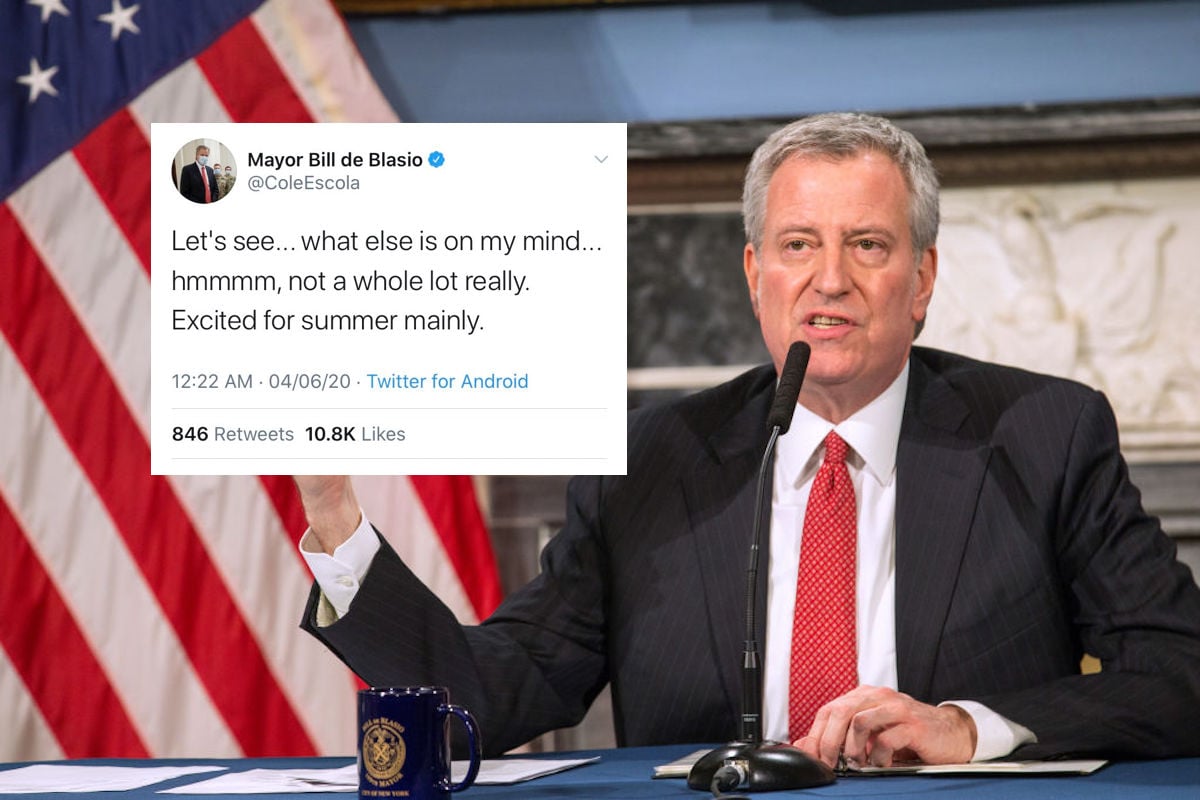 Writer, actor, and comedian Cole Escola had quite the Twitter adventure on Wednesday, posting a series of hilarious Tweets with his display name changed to “Mayor Bill de Blasio” and a profile picture to match.

Because Escola is verified on Twitter, at first glance, the Tweets could be viewed as coming from de Blasio. They riffed on the New York City Mayor’s total cluelessness and blundering buffoonery, which have long been in evidence and risen in sharp relief as of late. Escola’s Tweets racked up thousands of likes and retweets before his account was suspended.

You can see that Escola is deftly mimicking the Mayor’s own tone.

Incredible work here by both Cole and the twitter algorithm pic.twitter.com/F5fdtwT83W

After getting in a good number of Tweets depicting an oblivious de Blasio—which garnered widespread applause, especially from frustrated New Yorkers—Escola’s account was suspended by Twitter. It’s unclear how long the suspension will remain, but this was a completely disproportionate reaction on Twitter’s part.

While “impersonation” is a policy strictly against many companies’ TOS, including Twitter’s “rules,” Escola’s Tweets were clearly parody, and his user name @ColeEscola was right beside “Mayor Bill de Blasio” for anyone willing to read beyond four words. Twitter’s own more detailed impersonation policy page reads, “Twitter users are allowed to create parody, newsfeed, commentary, or fan accounts.”

So @ColeEscola was suspended. I’m constantly flagging racism/misinformation with no results but this is cause for alarm?? pic.twitter.com/oJFgFr6H6J

Cole Escola is one of the funniest and sharpest people alive and these are the tweets that got him suspended pic.twitter.com/e9wZE7ISxr

Fellow comedians also came to Escola’s defense. His Tweets are obvious, winking satire. It’s hard to see what could have possibly justified a suspension of his account.

They suspended @ColeEscola?? For satire?? @jack get your priorities straight. This site is trash. FREE @COLEESCOLA!!!!

He used his blue check mark to pretend to be Bill de Blasio. It was hilarious.

It’s extremely disconcerting that Escola was suspended for these Tweets. Not only were they parody and inoffensive in their content, but as many defending him point out, Twitter lags and drags its heels in taking action against actual Nazis and hate-speech spewers. While Escola is verified and has a higher profile, Twitter has shown it hardly expects different standards from its verified users (cough the president cough), and it’s incomprehensible to me that they did not simply warn him to change his display name. The Tweets, minus the “Mayor de Blasio” display, would never have gotten him a suspension otherwise.

This is an unjustifiable suspension. Twitter must restore Escola’s account and explain what guided their actions here. And if de Blasio and his team were involved in sending a complaint, may I suggest that they turn their attention to the city they currently have on a curfew that gives the police total impunity to take action against people protesting police impunity?

What the fuck @Twitter? How on earth did you think it was appropriate to suspend @ColeEscola for political parody? You guys are idiots.

Remember this day. Twitter shuts down @ColeEscola and says he doesn’t exist (if you search for his name on Twit). But they keep publishing @realDonaldTrump. Today, Twitter silences a comedian while they continue to publish the rantings of an unhinged fascist. #ItCanHappenHere

In a way @ColeEscola got the last laugh because now it just looks like de Blasio got suspended from Twitter pic.twitter.com/mLTG2bCoib

While the great @ColeEscola is suspended, if you’re missing him, can I recommend his wildly funny YouTube special til he gets back? https://t.co/pvAcToHhh3