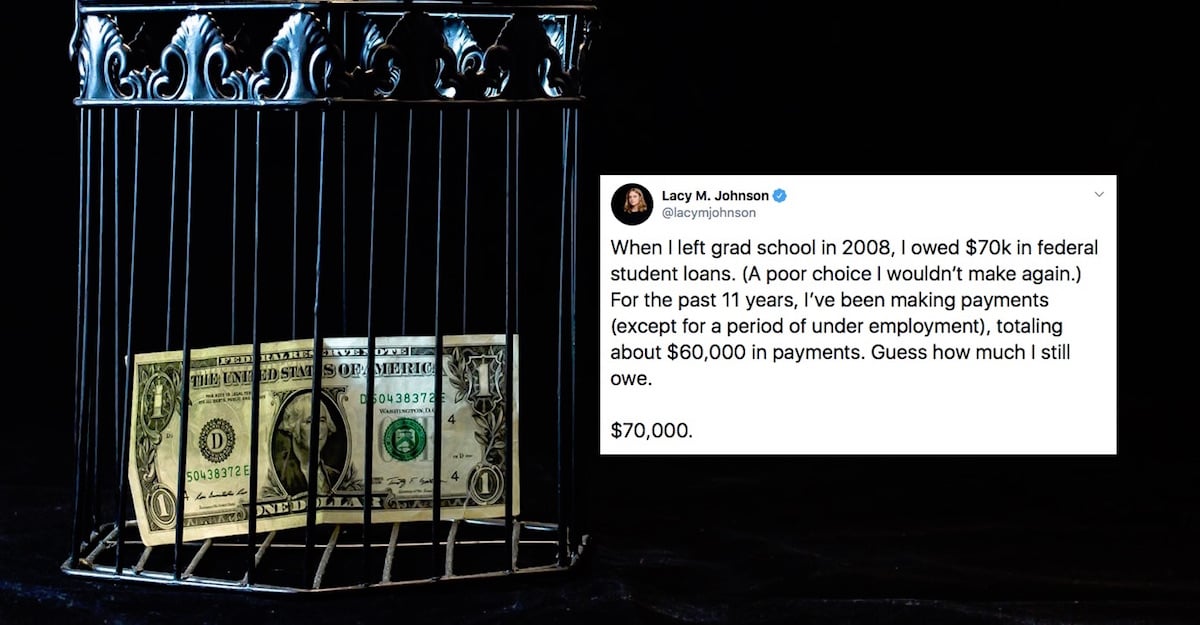 When I left grad school in 2008, I owed $70k in federal student loans. (A poor choice I wouldn’t make again.) For the past 11 years, I’ve been making payments (except for a period of under employment), totaling about $60,000 in payments. Guess how much I still owe.

When I went to sleep last night, after a long while scrolling with increasing anger through the reply thread that Johnson’s tweet had wrought, there were maybe a few dozen retweets and a few hundred likes. The tweet had exploded by the time I woke up, with 13k retweets and 70k+ likes at current.

Johnson’s experience struck a nerve—and revealed just how common it is for Americans to be drowning in nigh-on-unpayable student loan debt. For a variety of factors, but crucially at the moment because of ballooning interest rates, even when you are prompt with paying a significant balance each month, you’re often only digging yourself deeper into a debt hole.

As Johnson’s tweet demonstrated, many, many people have ended up owing far more than their initial loans after years of expensive payments. While the problem of student loan debt is much bandied about by Presidential candidates, often in the abstract, it’s another experience entirely to see the outrageous numbers so starkly in this thread.

Student loans are a scam!!!!

For the most part, this is a uniquely American problem, and several replies to Johnson’s thread have emphasized how our policies effectively keep generations of students indentured to their loans for the crime of pursuing a higher education degree (which we were raised being told was the right thing to do and is often the only way through the door in many jobs).

I just don’t understand America. Health and education are supposed to be an investment in society, not a way for rich corporations to keep poor people in their place. Whatever happened to throwing off the yoke of the class system?

The American system is broken. I did my BA, MA and now completing a PhD with no help from my parents and no savings and I only owe 25K (19K in USD). And no interests to pay before I finish my studies, plus loan repayments are tax-deductible. Oh and interest rates are only 3-5%…

Beyond binding so many to debilitating loans and soaring interest rates, people’s frightening experience herein also serves to disincentivize many who would love to go to undergraduate or graduate school, but are rightfully afraid of finding themselves in a similar situation. This renders a less-educated populace overall, not to mention a sacrifice of potential. Imagine all the knowledge and innovation and creativity we have lost and are losing by making education so prohibitive, and paying for it a life sentence.

It’s a new form of legalized indentured servitude. Not to one employer, but to a whole “employment” class. A way to solidify an emerging “caste” hierarchy, in which the permanently indebted are entrapped. Pernicious & predatory.

It’s incredibly disturbing and infuriating that these are government-backed loans that are chaining people to ballooning loans for life. For many, there’s zero expectation that they will ever be out from under this insane financial burden.

In the exact same boat.

Over the course of her life she took deferments and rolled debt over. Her $70k in student debt only helped her get a modest raise.

I think she knew early on she’d never pay them back.

I graduated in 1998. I used deferrals and forbearance for years because I was too poor to pay. I originally borrowed $48,000 and have paid approximately $27,000 over the years since Income Based Payments became an option. I now owe $192,000.

We’re all going to die with student loan debt 😢

One of the biggest problems with so many of these loans and payment systems are ballooning interest rates, so that you’re paying considerable sums every month—but that’s merely paying off the interest, not making a dent into the principal of the loan. We used to call this usury.

It is, as one user expresses, something that sounds more like an organized crime racket. It’s also incredibly difficult under the current law to declare bankruptcy and discharge student loans—unlike what’s possible for people with failed business ventures like Donald Trump. (Trump filed for Chapter 11 bankruptcy for his companies six times.)

This is why college grads are trapped in student loan debt
cc: @SenatorDurbin pic.twitter.com/guFayQfQ5d

Schools and the loan system have just become a racket.
We’re supposed to be able to get a well paying job and have a good life after school, not be indebted forever.

Paying so much interest means that people who took out federal loans can end up paying much more for their education than those whose families could afford it from the start or who could afford to take smaller loans.

Yes. The system is taxing everyone else for daring to want an education.

While there are a few concern trolls in the thread complaining about ideas for loan forgiveness, there’s a great deal more support from people who realize that relief from this kind of crushing debt isn’t only humane but would also beneficial for the economy. Also, it costs nothing to be nice and considerate to people who are suffering, like these exceptional Americans:

I paid off my student loans in 2000, my wife’s were done in 2002. I support student loan forgiveness not because it would help me but because it’s good for the economy.

Same here. Paid my last loan off last year after 15 years of payments. Consider myself lucky, and I support a big change, including loan forgiveness.

I recommend starting from the beginning and reading all of Johnson’s now-viral Tweet thread. This is happening to so many people, and the American government, which just filed a “$735.2 billion defense authorization bill for fiscal 2020,” has the money to be taking better care of its citizens who are enduring a lifetime of fiscal punishment for their education. We must do better. Both Senators Bernie Sanders and Elizabeth Warren are intent on tackling these issues if they’re elected President; hold anyone without a plan to account.