Twin Peaks Newbie Recap: “On the Wings of Love” & “Variations on Relations” 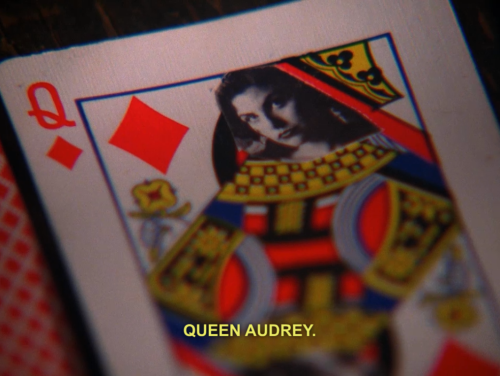 In which I realize THERE ARE ONLY THREE EPISODES LEFT.

[Editor’s Note: Catch up on the rest of my Twin Peaks newbie recaps here!]

Sheriff Harry wakes up to Sue Ellen Mischke rubbing his body all creepy-life and putting perfume (?) on his lips and then hers. Or was it something that causes hallucinations because he’s seeing Josie when he wakes up.  She tries to strangle him! Oh my god don’t you dare kill off Harry!!! Thankfully he’s able to wrestle himself free and knock her out. BILLY ZANE is doing odd things in his room when Audrey arrives to deliver food. And then he makes a very direct sex reference while having his sweater tucked into his pants and I just can’t. However, Audrey fires back with his, “If you bring a hammer, you better bring nails.”

Sue Ellen is asking for theSouth African consulate after Harry arrested her. Badly hungover, he’s helped to throw up by Agent Cooper discussing all kinds of foods. There’s a surprise bonsai tree waiting for him in his office. Dr. Hayward said it was delivered this morning and the attached note says it was from Josie. He also takes this time to tell them Windom was at his house over 24 hours ago. Sigh. Agent Gordon Cole is back! Uh oh! The tree has a microphone in it and Windom is listening. 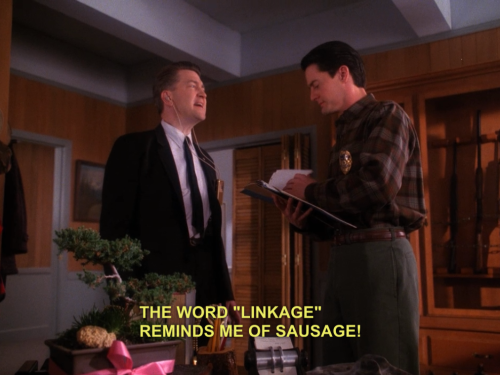 Cole lets them know Windom was on the same drug as the one-armed man when he went off years ago. And there’s a connection to Project Blue Book! Cole proceeds to shout into the tree which causes some nice feedback for Windom. He also tells Agent Cooper he’s reinstated into the FBI! With a new gun. Meanwhile, Windom is doing card tricks with Leo with Shelly, Audrey, and Donna on cards. Agent Cooper also has one but there’s a Queen still without a face. Windom says the Miss Twin Peaks pageant winner is going to die.

Donna has followed her mom to the Great Northern where she’s meeting with Benjamin once again. Mike and Nadine are done with their magical night of sex, and Donna asks to see Audrey to inquire about her dad’s relationship to her mom. You’re in luck! I’ve got a secret hole we can watch them from! Benjamin and Eileen are discussing letters she’s had for 20 years. They apparently had a relationship. Welp, Donna and Audrey are totally sisters.

Agent Cooper, Cole, and Harry stope for food at the R&R. Poor Harry made to vomit again. Cole, who thinks Shelly looks like the Venus de Milo, can apparently hear her perfectly! She tells him to stop yelling anyway and the Log Lady is building log cabins with toothpicks. 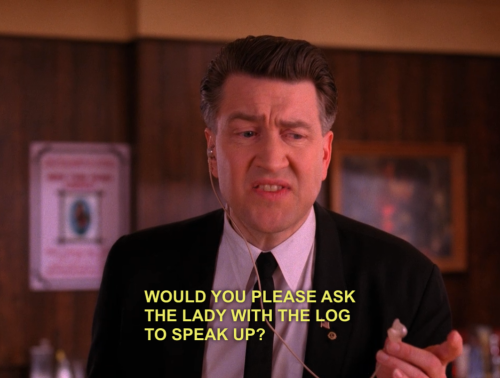 Cooper is playing with the shapes of Major Briggs and the Log Lady’s marks and fitting them together as one. Annie and Coop flirt for a bit as Harry looks on. She recognizes the shapes he was combining as being from Owl Cave. James sent Donna a post card from San Francisco, he’s having a great time btw, and she tries to talk to her dad about Benjamin. Just then her mom gets a bunch of roses delivered. Awkward!

Windom, in disguise, bumps into Audrey in the library. She studying civil disobedience. Ok then. He has her read the poem they all got which he notes is by the author Shelley. Meanwhile, Twin Peaks Shelly talks with Annie about the convent. She insists she’s not interested in Agent Cooper. At the station Andy is practicing his spelunking. Lucy says thanks for helping with the weasel because Dick was no help.

Benjamin is talking about the Kennedy’s with Audrey, says she’s his Bobby to his President Kennedy. Ok, Ben. Admits he’s been a sleazy dude for most of his life too but wants to send her to Seattle to meet with environmental people. Guess the BILLY ZANE date will have to wait. BILLY ZANE arrives, bids Audrey farewell, and tells Benjamin to tell the hardest truth first. And then gives him the same courtesy. 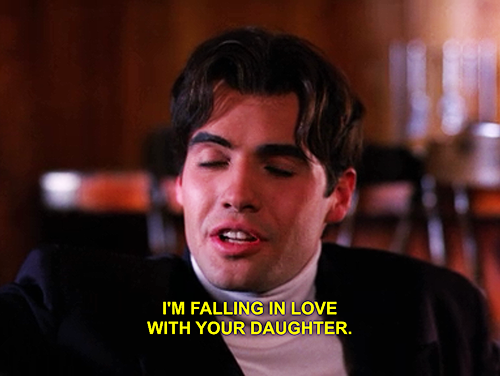 Oh and apparently carrots are the new cigars. Benjamin offers BILLY ZANE one.

At the Owl cave, they find the symbol. HAWK-AH! OWL FACE! It’s flying above them and Andy puts a pick into the wall o’ symbols and some Indiana Jones shit happens. 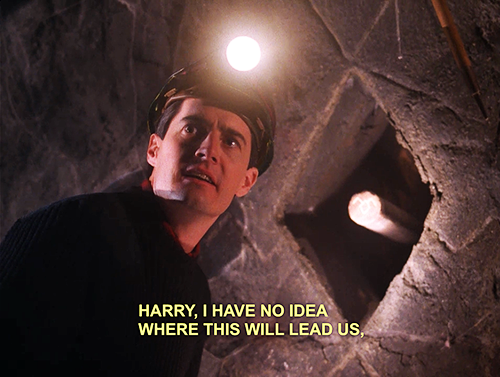 Another OWL! Or was it the same owl? Hmm. Either way, they decide not to continue investigating just now and to just check back later and not leave any security there.

Annie is at the bar at the hotel, has no idea what to drink, and gets a suggestion for rum and tonic from the bartender. Really? Anyway, Agent Cooper joins her, sees the scar on her wrist again, which prompts her to say she “failed before” and is afraid it will happen again. Meanwhile, Windom goes directly to the cave, spots a mark on the ceiling inverted from the pole. Turns the pole so they match and everything starts to shake!

The gang goes back to the cave, where they find the site disturbed, and Hawk finds Windom’s foot prints — the same from the recent explosion. There’s more markings uncovered now on the wall. Windom is at his cabin, telling a story of the White Lodge to Leo, and mentioning that the opposite is the Black Lodge and he intends to find it. OH MY GOD I KNOW THAT OTHER GUY! 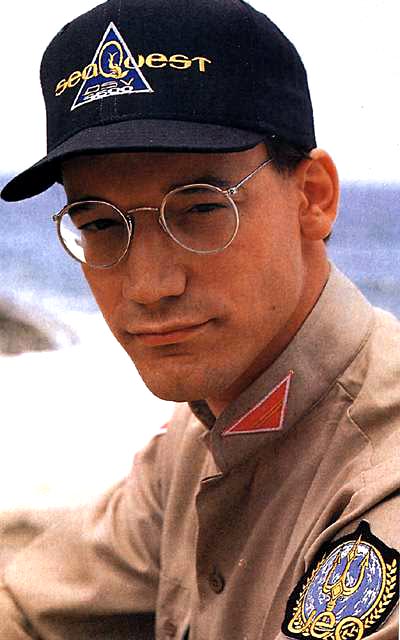 Anyway, he was promised beer and a party.

Peter is working on the chess board and coming up with a poem for Josie. Catherine needs help opening the box Eckhardt left her which Peter explains is a puzzle box. He says it could take years to figure out how to open it.

At the R&R Bobby is trying to talk to Shelly, wants to take advantage of her beauty by entering her in the pageant. And suddenly he’s very Leo saying, “Bobby’s in charge, understand?” Gross. 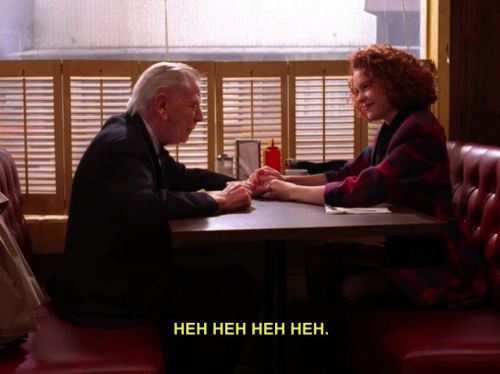 Teen Witch is also at the diner and tells her new fella she wants to win the Miss Twin Peaks contest. He’s a judge. Hint. Hint. Nudge. Nudge. Agent Cooper asks Annie to join him on a nature study while Shelly says the Windom poem out loud and Cooper recognizes it. He also once sent it to Caroline.

Major Briggs is at the station telling Andy how to draw the whole group of symbols exactly. Agent Cooper has many feelings but can’t put his finger on it. That seems to be going around. He asks Briggs about Windom’s Blue Book files but he’s hesitant to give the info over a moral responsibility. “Will the info help prevent future loss of life?” he asks. “Yes,” says Cooper. Ok we’ve kicked it up a notch — there’s a shadowy, hooded figure, space and stars,  an OWL. Agent Cooper compares the handwriting from Leo’s arrest sheet with the poem and realizes he’s the one who transcribed it.

Dick has a HUGE bandage on his nose from the weasel incident. Benjamin says they’ll pay his medical expenses but he pushes for workers compensation as well. Benjamin mutters, “Sometimes the urge to do bad is overpowering.” Windom has beer for the new guy who is now stuck in a papier-mâché chess piece!! OMG. He asks Leo for an arrow, he’s hesitant and gets electricuted for it and of course Windom kills the dude anyway.

Miss Twin Peaks pageant sign up has Benjamin trying to convince Hayward, Dwayne, and Peter (the committee) that they should do away with the swimsuit “jiggle fest.” He suggests a more serious topic for the speeches — “how to save our forests.” Ghostwood development opposition has nothing to do with it he insists. Bobby, Shelly, and Donna there, Benjamin gives Donna a look and she throws serious shade back. Oh no, Nadine is entering the contest too. Bobby takes Mike aside trying to insinuate something about his new relationship and gets quite the shock when Mike describes whatever the combination of sexual maturity and superhuman strength gets him. 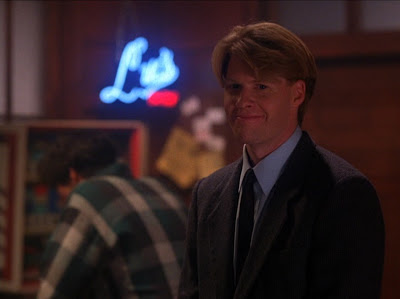 Sheriff Harry goes to speak to Catherine about Josie. “I find it hard to hate her,” she says with the most awful smirk on her face. She tries to get help from him opening the box when Peter comes in, drops it, and… it’s open. But it’s another box! It has markings of astrology? And moons?

Agent Cooper and Annie go out on the lake. He tries to bring up old boyfriends but she doesn’t want to talk about why she went to the convent. They share a kiss with Windom watching. There’s a wine tasting at hotel to benefit the Stop Ghostwood movement. Teen Witch and Lucy are helping pour. While sniffing he sticks his bandaged nose right in his full glass. 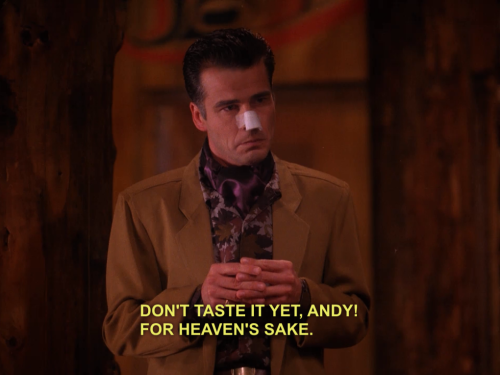 BILLY ZANE joins Cooper by the fire at the hotel to talk love. He gets an urgent telegram and must check out right away. At the R&R, Shelly chats with Gordon Cole, who is totally smitten. Agent Cooper and Annie join them for pie and all is calm. Cole wants to kiss her, she oblidges, just as Bobby walks in. So what happens?

Donna is at family dinner (without her sisters who are never actually around), this is going to be fun. She just straight up asks how her mom knows Benjamin and when she’s not getting the responses she wanted, tells her parents she entered the pageant in the hopes of studying overseas.

There’s that hooded figure again, the moon, an OWL. Agent Cooper heads to the latest crime scene which happens to be the gazebo near the lake. There’s a “pull me” cord hanging out of a large wood crate. Thinking there could be something dangerous inside, he ties a big rock to police tape, sits in on the ledge of the gazebo, and shoots it with his new gun. And there’s the murder art project. It reads: “Next time it will be someone you know.”