Tucker Carlson Continues to Have a Terrible, No Good, Very Bad Week 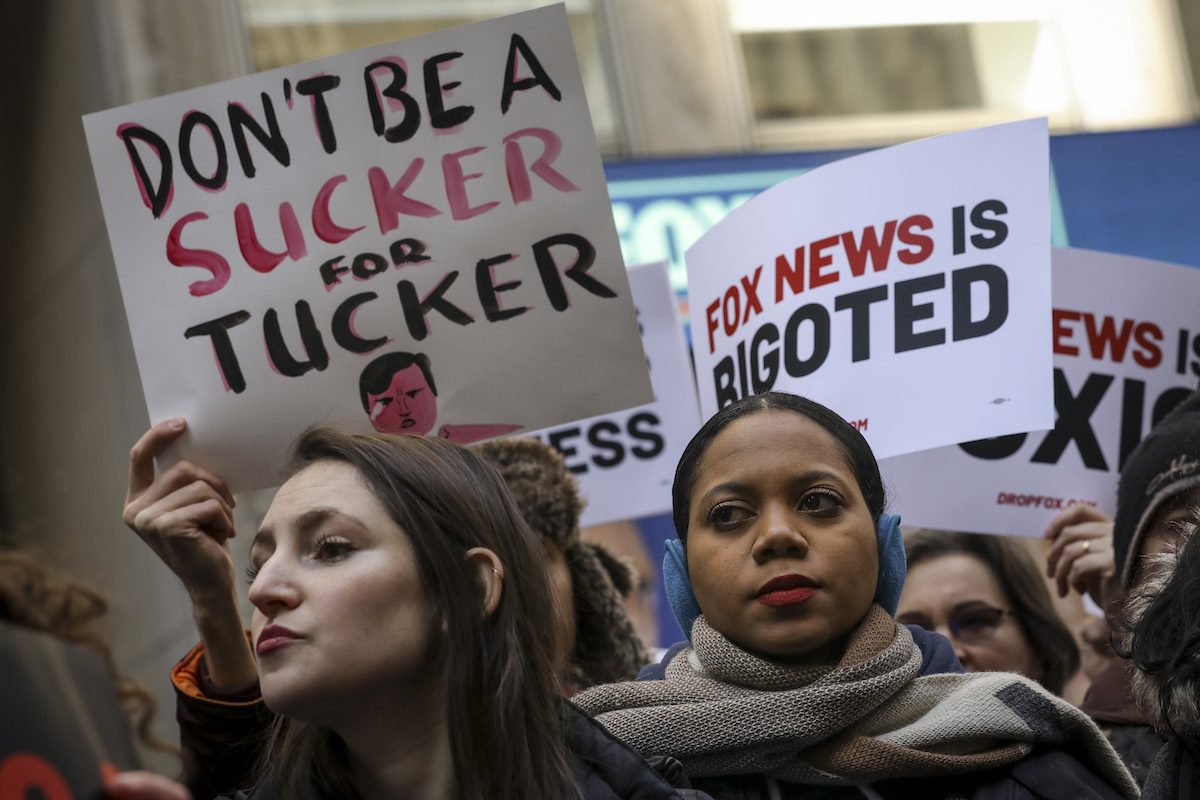 Tucker Carlson does not seem to be having his best week ever.

Sunday night, Media Matters for America released a compilation of clips from the Fox News host’s old appearances on the shock-jock show Bubba the Love Sponge, in which he calls women “primitive,” insults the physical appearance of a female Supreme Court Justice, and defends the leader of a cult currently serving a life sentence for committing acts of child abuse and orchestrating others, and that’s only a small sampling of the opinions he not just possessed, but thought worthy of sharing.

On the radio. For people to hear.

Come Monday, Carlson refused to apologize for those clips. On his show that night, he ranted about the “American outrage machine.”

When someone gets called out for their reprehensible statements, “There’s really not that much you can do to respond,” he told his audience. “It’s pointless to try to explain how the words were spoken in jest, or taken out of context, or in any case bear no resemblance to what you actually think, or would want for the country. None of that matters. Nobody cares. You know the role you’re required to play: You are a sinner, begging the forgiveness of Twitter.”

Except here’s the thing: No one wants that kind of faux contrition from Carlson, because the words were not taken out of context, and more importantly, they don’t seem to be that far off from the person he still presents himself to be. Carlson still pushes white nationalist rhetoric on his show all the time, as we’ve written about here on this site, and as Samantha Bee illustrated this week on Full Frontal:

The point of releasing those clips, and the point of sharing or commenting on them, is not to get an apology. No one cares about an apology. It’s about shining a light on the kind of person Carlson was and still is. The man has a gigantic audience that includes the ear of the president, and if the best way to point out how little he deserves that platform turns out to be just the basic quoting of his own words, then I don’t really see how Carlson thinks he has a leg to stand on.

On his show Tuesday, Carlson attacked Media Matters, inaccurately calling them “a George Soros-funded lobbying organization, whose sole mission is to punish critics of the Democratic Party.” He also suggested the IRS should investigate the organization. How that relates to his misogynist, racist, and perverted statements isn’t clear.

Tucker Carlson says @MMFA “would like Fox News shut down tomorrow.” The group’s president @GoAngelo says that’s not true. “My intention ultimately is to enforce a change of behavior, not to eradicate Fox,” he told @dbauder https://t.co/AEgSyktj0q

Media Matters has continued to release even more clips. They feature Carlson saying that “Iraq is a crappy place filled with a bunch of semiliterate monkeys” who “can just shut the fuck up and obey” the American forces in the country. He repeatedly used the words f*g and f*ggot in a joking but still entirely derogatory way. He says that immigrants should be “hot” or “really smart” in order to “have something to offer” citizens of the United States.

“She’s like, she’s vulnerable,” he said. “She’s like a wounded gazelle, separated from the herd.” Carlson called her “so dumb” and asked, “I mean, if you had a wife that dumb, would it be good or bad?” Upton has previously said that she considered suicide after her performance at the competition went viral.

Carlson and the others also repeatedly suggested that Mario Lopez, who hosted the pageant, had sex with Upton.

It’s worth remembering that the host of this show where Carlson made all these comments—the man who literally changed his legal name to Bubba the Love Sponge—was fired from Clear Channel over racist and sexually explicit jokes. He was sued for alleged on-air animal cruelty, as well as for allegedly overseeing sexual assault on his show.

He’s the man who is reported to have filmed the infamous Hulk Hogan sex tape without Hogan’s knowledge. This is the man for whom Carlson’s entire job seemed to be to call in to get Bubba to seem reasonable by comparison.

Carlson has lost a small handful of advertisers over the last few days, as has Jeanine Pirro after making her own anti-Muslim comments this week. Fox had what Media Matters called an “emergency meeting” with advertisers Wednesday—a meeting that was met with protests outside.

Today, Fox News wanted to convince advertisers that controversies are behind them, instead their volatility on full display. Today was Day 1. Fox will work hard between now and end of sales period in May. We need to work harder. Your participation matters. Onward! pic.twitter.com/qS2dCDZJPQ

By Wednesday night, Carlson was grasping at straws. He attempted to fight back with Media Matters’ own tactics, digging up old blog posts from the organization’s president Angelo Carusone that Carlson says prove Carusone to be “an enthusiastic bigot.” The posts are, indeed, disturbing. They’re full of transphobic and racist slurs and sentiments, but Carusone explained to The Wrap that they were part of an “exercise” of “a satirical parody of a right wing blow hard.”

“The entire thing was a caricature of what a right wing blow hard would sound like if he was living my life,” Carusone says. “It wasn’t a very good effort. I did it for two months and I stopped. It was a parody.”

Reading some of the posts on The Daily Caller, a site founded by Tucker Carlson, I agree with Carusone: It was not a good effort. This particular satire is not funny and it doesn’t lampoon the character of the bigot so much as it just presents bigoted ideas, but it is entirely disingenuous of Carlson to say that these posts represent Carusone’s actual views.

But I guess that’s all Carlson and Fox have to work with as they grasp desperately at their remaining advertisers.