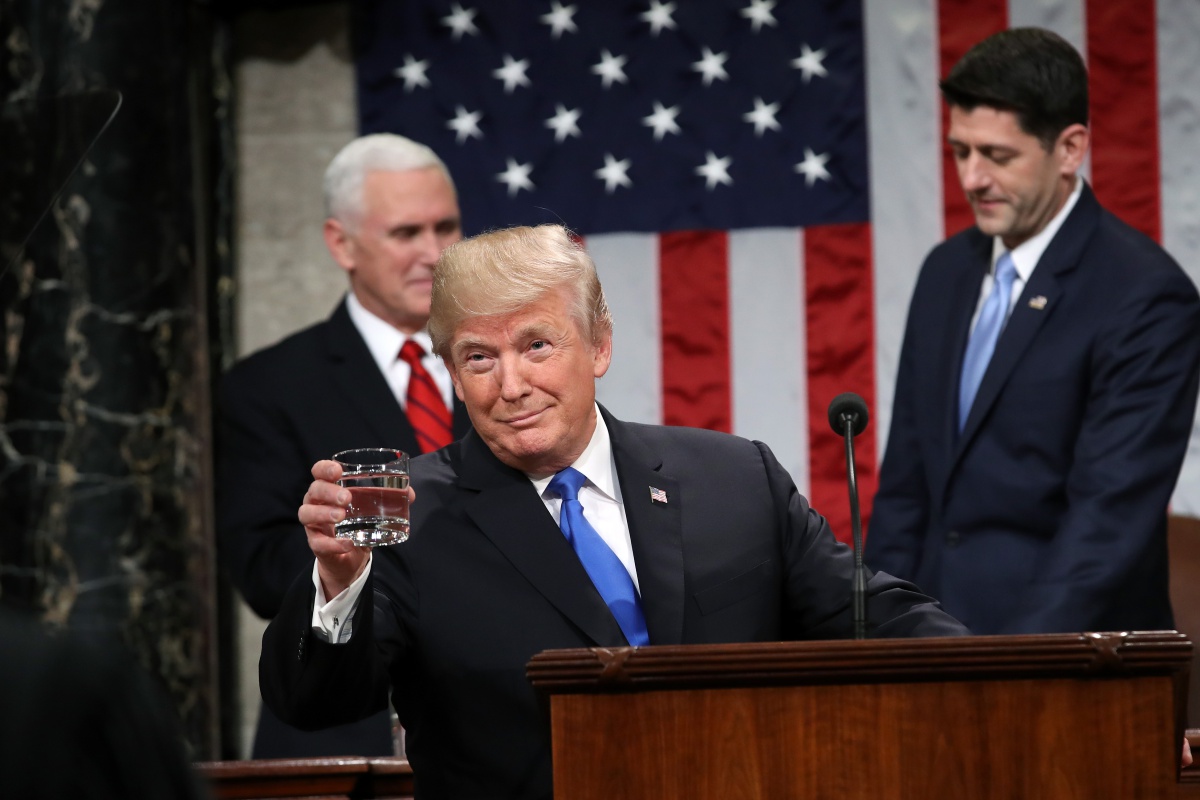 In his State of the Union last night—the one that Nancy Pelosi allowed him to have—one of the issues that President Trump highlighted was the favorite propaganda term of the anti-choice right: “late-term abortion.”

“There could be no greater contrast to the beautiful image of a mother holding her infant child than the chilling displays our nation saw in recent days,” Trump said in his speech. “Let us work together to build a culture that cherishes innocent life, and let us reaffirm a fundamental truth: all children, born and unborn, are made in the holy image of God.”

The loudest applause of the night from Republican men was about controlling women’s bodies.

That’s big talk from someone who was on the record as being “very pro-choice” in 1999, but this callout is more than just evidence of Trump’s political transformation over the last twenty years. It’s a clear address to the Evangelical base by parroting their views on one of their big issues: abortion. He accused New York lawmakers of supporting “legislation that would allow a baby to be ripped from the mother’s womb moments before birth” and said that Virginia Gov. Ralph Northam “would execute a baby after birth,” referring to the propaganda term “late-term abortion.”

I’m calling it a propaganda term because there is, medically, no such thing as a late-term abortion. As Dr. Barbara Levy, vice president of health policy at the American College of Obstetricians and Gynecologists, and Dr. Jennifer Conti, a fellow with the advocacy group Physicians for Reproductive Health, explained to CNN the term exists entirely to create a brutal image rather than reflect the reality of what it means for mothers.

According to USA Today, Camille Gallo, spokeswoman for the National Republican Congressional Committee, said last week, “The Democratic Party has become so extreme they are now openly supporting the murder of newborn babies.”

The idea that abortion providers are gleefully ripping newborn babies from their mothers is something anti-choice advocates have held on to and use as a way to get even people who generally see themselves as pro-choice to nod along, saying, “That seems reasonable,” but only because the term and image have been curated to remove all the medical and emotional nuance from women who have abortions later in their pregnancies.

“Nobody arrives at the decision to have an abortion after 24 weeks carelessly,” Dr. Conti explains in her interview. “There are many reasons why women may need to access abortion later in pregnancy, including maternal health endangerment, diagnosis of fetal abnormalities or restrictive laws delaying earlier access to abortion care. Those exceptionally rare cases that happen after 24 weeks are often because a fetus has a condition that cannot be treated and will never be able to survive—regardless of the gestational age or trimester.”

Dr. Levy adds that “some examples might include anencephaly or limb-body wall complex, when the organs develop outside of the body cavity. With conditions like these, the fetus cannot survive out of the uterus. […] It’s important to note, if a woman’s health or life is at risk and the fetus is viable, delivery is pursued, not abortion.”

Conditions like anencephaly, where the fetus forms without a complete brain or skull, bring people to these decisions, especially because a lot of issues cannot be found until later in the pregnancy. When these medical issues are found and abortions later in pregnancy occur, there are very few places in the country that are able to perform such procedures. This not only affects the health of the fetus, but that of the mother.

Abortions later in pregnancy are also rare. According to the US Centers for Disease Control and Prevention, abortions after 21 weeks make up less than 1.3% of all abortions in the country, meaning that ones after 24 weeks are even rarer. So why, then, do anti-choice organizations and supporters focus on this and do not look into all the medical reasons why abortions during this time would occur? Because it’s easier to just paint women as monsters for having the procedure in the first place.

It’s easier to spread anti-choice propaganda if they paint women who have abortions as sex-crazed women who want to have consequence-free sex, appealing to internalized sexual judgment and misogyny, than as mothers having to make tough choices about pregnancies they very likely wanted to continue. Anti-choice organizations don’t care why women seek abortions; they just want to stop it because they want to maintain the moral high-ground they’ve created for themselves.

To find out the reality of what this means for women, it’s important to look at stories like the one Jezebel published in 2016, about a woman who had an abortion at 32 weeks because her child wouldn’t be able to breathe outside the womb and would not survive.

Dr. Conti says something that really stuck with me at the end of her interview:

“As someone who used to self-identify as anti-choice, I can attest that the biggest misunderstanding about abortion is the framework of hypotheticals vs. reality. All pregnancies carry risks, but some much more than others, and it is the job of the patient to weigh risks and benefits in all medical decisions. Not politicians. Not journalists. Not strangers on Twitter. Misleading hypotheticals show disregard and contempt for people who have had an abortion later in pregnancy. People who have abortions deserve empathy and understanding, not judgment.”

Because as pro-choice as I am today, it was a journey from being pro-choice with caveats to being at the point where I’m a fully, unasterisked pro-choice, not just because I understand that my caveats don’t matter, but that anti-choice organizations offer no women’s medical health, economic, or social alternative for their anti-choice rhetoric.

When I go on sites like Feminists for Life to see what exactly do they support in order to prevent unwanted pregnancy, the result is nothing:

What is your position on abstinence and chastity, various forms of birth control, and natural family planning? Feminists for Life advocates practical resources and support to address the unmet needs of pregnant women and parents. Preconception issues are outside FFL’s mission. Feminists for Life members and supporters hold a broad spectrum of opinions regarding preconception issues, and FFL welcomes anyone committed to working alongside us in our shared mission.

To say that preconception issues are outside of your mission, when your mission is to prevent the need for women to choose abortion, says you are concerned about the morality of imaginary situations  and not the practicality of what really happens. To be “pro-life” but anti-birth control, anti-sex education, and anti-welfare/health care reform is a contradiction, and it places more concern on rhetoric than the lives of women.

With Trump, his lofty ideals aside, what he is doing is getting the one-issue abortion voters ready on the right for 2020. It is unlikely that the Democrats will allow anything to pass further limiting abortion rights. However, by bringing this issue to the forefront, it’s something everyone running in 2020 will have to take a stand on.