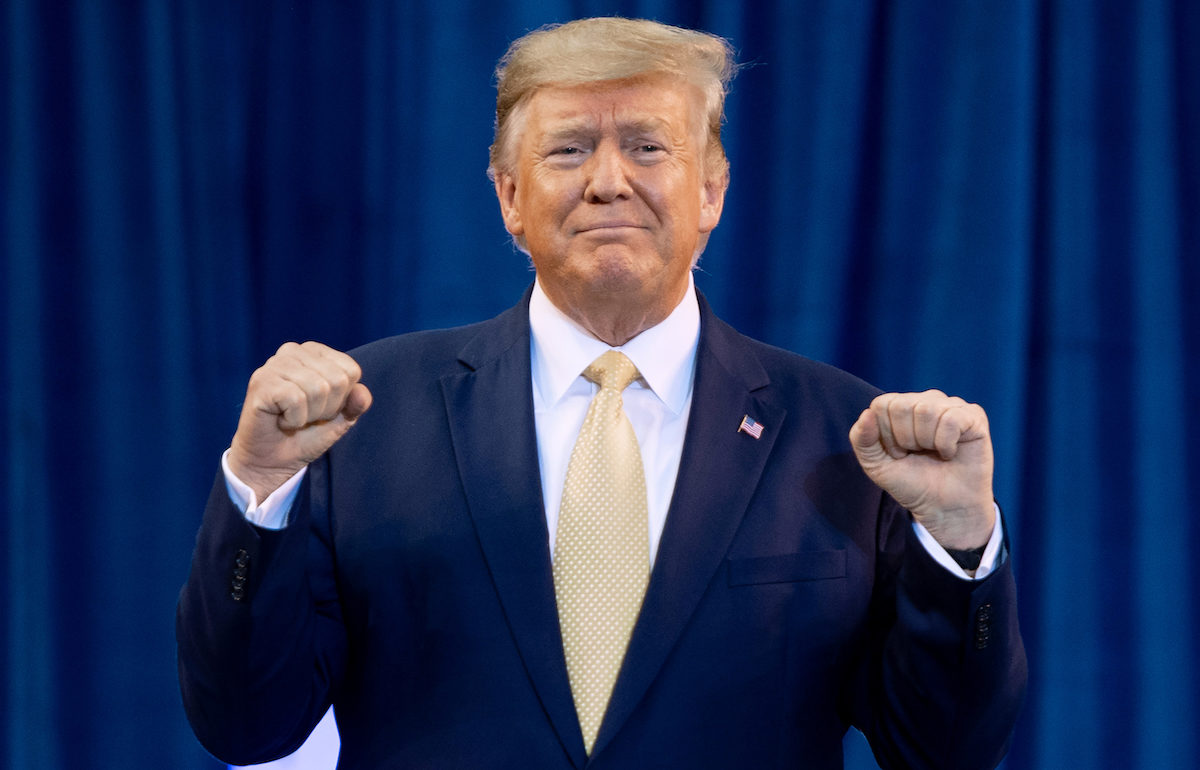 **Content warning: descriptions of acts of violence, including gun violence.**

It also featured an incredibly disturbing video, depicting Trump essentially murdering everyone he’s declared to be an enemy.

The video takes the scene from Kingsman where Colin Firth’s Harry murders dozens of people in a church, thanks to Samuel L. Jackson’s violence-inducing SIM cards he’s planted in free cell phones. That scene was horrifying, but it was also so brilliantly choreographed and edited that the spectacle of the scene was meant to be as invigorating as it was repulsive.

The Trump version, though, is just disgusting. In a crude meme style, Firth’s face has been replaced with Trump’s, and the people he’s brutally killing aren’t the Westboro Baptist Church-inspired bigots of the film, but very real people like Barack Obama, Bernie Sanders, Mitt Romney (who has started to become mildly critical of Trump lately), and Hillary Clinton. Many more simply have boxes over their faces branded with news network logos or other words like Black Lives Matter and “fake news.”

When I heard about the video, I thought it couldn’t be that different from watching the actual movie scene. I thought it would be similar to that corny video he retweeted back in 2017 that shows him wrestling “CNN.”

I was wrong. This video is disturbing and completely deranged. It shows Trump with his dopey smirk, stabbing Rosie O’Donnell in the head, setting Bernie Sanders on fire, repeatedly punching Democratic Congresswoman Maxine Waters until she falls backwards through a window labeled “JAIL.” He shoots the very concept of Black Lives Matter at point-blank range. It’s all incredibly graphic.

I’m not sure how anyone could watch this video and not think that it’s encouraging violence towards Democrats, journalists, and anyone who even mildly criticizes Trump–especially since we’ve seen multiple instances of his supporters being inspired by his violent rhetoric to attack those very people and institutions.

At a conference of Trump supporters, they played a video of our president murdering journalists in a church. Last year, a Trump supporter sent bombs to CNN—and a shooter entered a church yesterday. This video isn’t funny. It will get people killed. https://t.co/XWtq1z38Kc

The #trumpvideo is a form of terror. They will say: it’s a joke, Trump wouldn’t kill journalists, we are perverse to think they condone a church mass murder, laugh a little. We are meant to doubt its literalnsss.

But we aren’t the audience. They know that. #StochasticTerrorism https://t.co/cteRDbTXDW

Find a tweet from a conservative defending the Kingsman video, then do a search for anything they may have tweeted about Kathy Griffin in 2017.

The results won’t shock you in the least 🙄 #TrumpVideo pic.twitter.com/FB3erav1QB

The comparisons to Kathy Griffin’s photoshoot with a fake decapitated Trump head are absurd and predictably hypocritical. For one thing, I’m guessing the Venn diagram of people moaning about white male comedians being victims of “cancel culture” and the ones who expressed outrage over Griffin in just one single circle.

Also, Kathy Griffin is a comedian expressing anger at the president. Donald Trump is the president, depicted here as brutally murdering a few dozen people and organizations he disagrees with.

And then there’s also the fact that there was enough handwringing over Kathy Griffin’s photo that she suffered real professional consequences. So the people comparing these two things should also be asking for whoever made and supported the video to face the same, right?

According to his press secretary Stephanie Grisham, Trump hasn’t seen the video and wasn’t aware of its existence.

Re: the video played over the weekend: The @POTUS @realDonaldTrump has not yet seen the video, he will see it shortly, but based upon everything he has heard, he strongly condemns this video.

However, the video was originally uploaded to YouTube last year and is linked to a site called MemeWorld. The Washington Post reports that the site’s creator, known online as Carpe Donktum, had an Oval Office meeting with Trump this past July. Trump reportedly called him a “genius.”

I can confirm, I did in fact visit the White House and meet with President Trump in the Oval office with my family and @mad_liberals and his guest.

You should have seen Mad_Liberal’s face when the “White House Tour” I promised him turned into a meet and greet in the Oval!

American Priority also claims to have no idea who made the video or how or why it was shown at the Trump-sanctioned event. They are, however, very upset that the media isn’t reporting on all the nice conference events that didn’t include images of the president murdering people.

So far, Trump hasn’t said anything about the video. I wonder how Barron’s doing with all of this.

Waiting for Donald Trump to condemn the video of him committing mass murder that was shown at his resort to his supporters, and to apologize to the families of those targeted. #trumpvideo https://t.co/U4M2ukY5sE