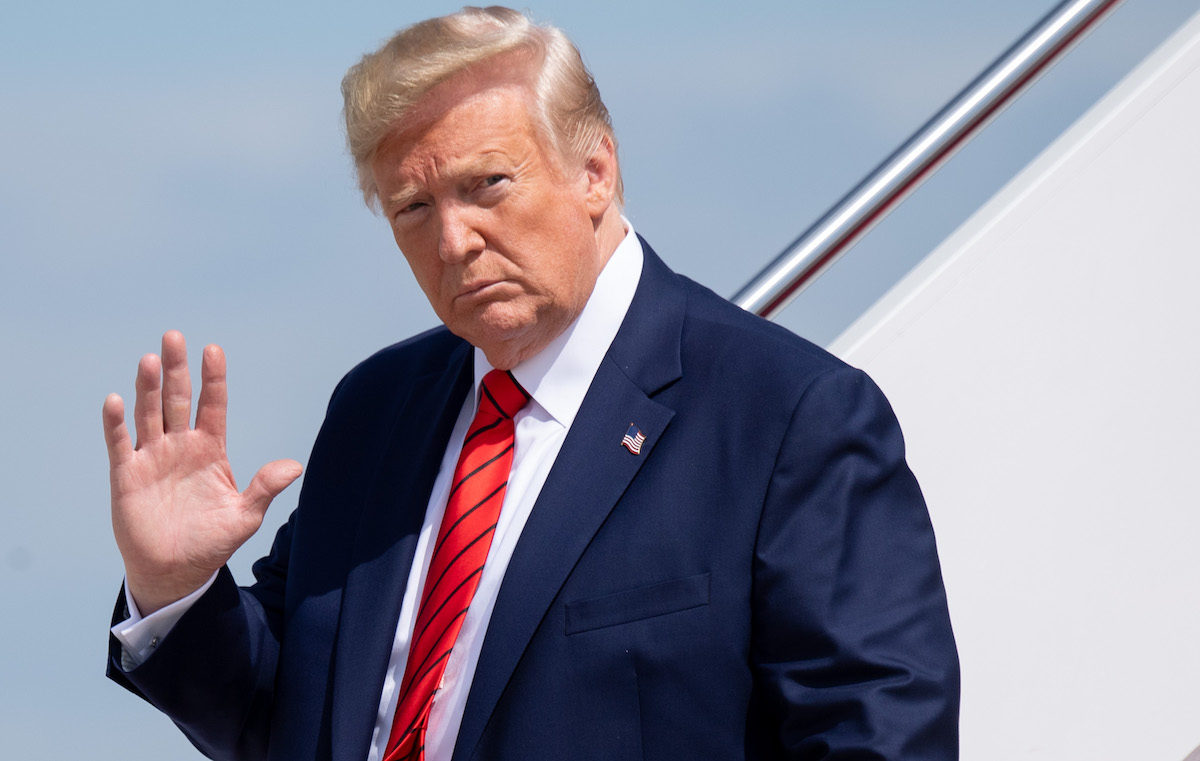 Last week, Donald Trump implied that the whistleblower who filed a complaint regarding Trump’s phone call with Ukranian President Volodomyr Zelensky should be arrested for treason, which is a crime punishable by execution. That statement, which was made at a private event but leaked online, could have been seen by some as a joke–or, at least, the crowd laughed. It was hard to tell from the audio exactly how serious Trump was.

In new statements made Sunday night and Monday morning on Twitter, it’s not at all difficult to see that Trump is 100% serious in some new accusations of treason against House Intelligence Committee Chair Adam Schiff.

“Rep. Adam Schiff illegally made up a FAKE & terrible statement, pretended it to be mine as the most important part of my call to the Ukrainian President, and read it aloud to Congress and the American people,” he wrote this morning. “It bore NO relationship to what I said on the call. Arrest for Treason?”

This comes after a Monday night thread in which Trump accused Schiff of “lying to Congress.” He seemed to be referring to Rep. Schiff’s opening statement at last week’s congressional hearing with acting Director of National Intelligence Joseph Maguire, in which Schiff summarized the memo of the call.

“His lies were made in perhaps the most blatant and sinister manner ever seen in the great Chamber,” Trump wrote. “He wrote down and read terrible things, then said it was from the mouth of the President of the United States. I want Schiff questioned at the highest level for Fraud & Treason.”

“Like every American, I deserve to meet my accuser, especially when this accuser, the so-called ‘Whistleblower,’ represented a perfect conversation with a foreign leader in a totally inaccurate and fraudulent way,” he wrote.

….In addition, I want to meet not only my accuser, who presented SECOND & THIRD HAND INFORMATION, but also the person who illegally gave this information, which was largely incorrect, to the “Whistleblower.” Was this person SPYING on the U.S. President? Big Consequences!

Trump doesn’t actually need or deserve to meet his “accuser,” especially not after making continued unfounded attacks on the whistleblower’s credibility. His reaction to the whistleblower’s complaint is exactly why we have whistleblower laws in the first place–to protect them from people like Trump who would want to silence and punish them.

Not that Trump understands those laws. He appears to be getting his information on the subject from his usual super-right-wing propaganda sources. In a lie repeated by Fox News, The Federalist falsely claimed whistleblower laws recently *mysteriously* changed. They reported that until recently, complaints had to contain firsthand accounts, which is not true. First of all, it’s still not clear how much firsthand knowledge this person has. Second, the most concerning parts of his complaint were confirmed by the White House’s own memorandum of the call. But most importantly, credible secondhand complaints have always been legal.

This is all from the same rant in which he quoted a Fox News guest who said that if Trump is impeached, “it will cause a Civil War like fracture in this Nation from which our Country will never heal.” Even Republican lawmakers are starting to have their limits pushed by Trump’s rhetoric.

I have visited nations ravaged by civil war. @realDonaldTrump I have never imagined such a quote to be repeated by a President. This is beyond repugnant. https://t.co/a5Bae7bP7g

Treason, conspiracy theories, and threats of actual war. Yup, Trump is taking this impeachment inquiry about as well as we all expected.