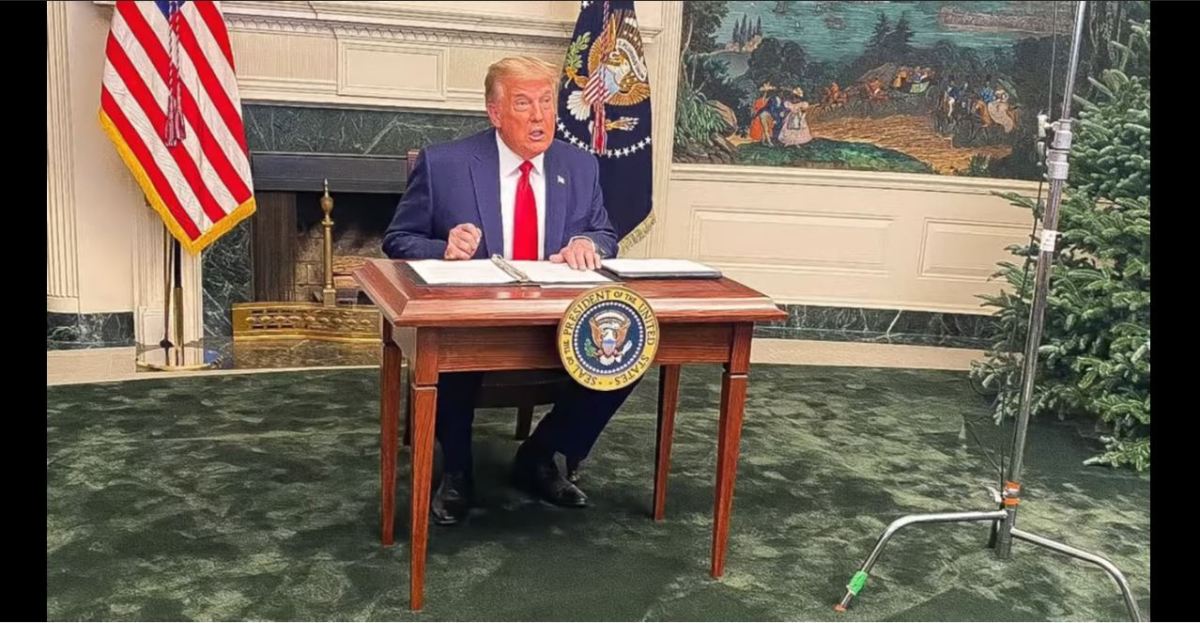 If you’ve visited this website at any time in the past 6 years, you know that we think former president Donald Trump is a racist, misogynist, xenophobic piece of trash. Literally anything and everything Trump has done has been abhorrent on some level … until now?

In a new missive from “his desk” (because he’s banned from social media), Trump encouraged Republicans not to vote in 2022 and 2024. He said, “If we don’t solve the Presidential Election Fraud of 2020…Republicans will not be voting in ’22 or ’24 … It is the single most important thing for Republicans to do.”

Trump is now calling on Republicans not to vote — declaring “Republicans will not be voting in ‘22 or ‘24” if his election fraud hoax is not “solved” first. He helped Republicans lose two Georgia Senate seats in January. Now he seems ready to try it again in the midterms. pic.twitter.com/ARBnsfwmzJ

And for the first time on God’s green earth, we find ourselves in agreement with Donald Trump. Wow, never thought I would type those words. I truly feel like Paul Rudd on Hot Ones right now.

Trump, who has spent his time out of office undermining election integrity, previously encouraged Republicans not to vote in the Georgia senate runoffs. His advice helped to tip the scales on both races, which ousted Sens. Perdue and Loeffler and replaced them with Sens. Ossoff and Warnock. As a result, Democrats now hold a wafer-thin Senate majority. Great work, Donald!

And Trump’s intimidation tactics are working, as a host of Republicans in the House and the Senate support his Big Lie about election fraud, or refuses to disavow it. House Minority Whip Steve Scalise, the second in command to House minority leader Kevin McCarthy, refused to call the 2020 presidential election legitimate during an interview with Chris Wallace on Fox News Sunday.

And guess who else is encouraging citizens not to vote for Republicans? The waning Republican establishment! A group of anti-Trump Republicans are campaigning for Democratic candidates in several competitive elections across the country, to prevent Republicans from regaining control of the House. The Renew America Movement (RAM), a coalition of centrist Republicans which was formed after the Trump insurrection attempt in January, are also supporting republicans like Rep. Liz Cheney, who are anti-Trump and refuse to endorse the Big Lie.

“With the mounting threats to our democracy and Constitution, we need people who work proactively to lead their party and the country away from the political extremes,” said Joel Searby, the group’s national political director.

But will this be enough to stem the tide of malevolent ignorance and conspiracy-mongering of the Big Lie? According to a Reuters/Ipsos poll from August, 30% of U.S. adults agreed that the “2020 election was stolen from Donald Trump.” That included 61% of Republicans, 19% of independents and 10% of Democrats. It’s a staggering number of people who now believe a quantifiable falsehood.

Hopefully, they’ll follow their dear leader as they have in the past, and stay home instead of voting. The country and the world would be better for it.