Did Trump Think Releasing This Disastrous 60 Minutes Interview Would Make Him Look … Good? 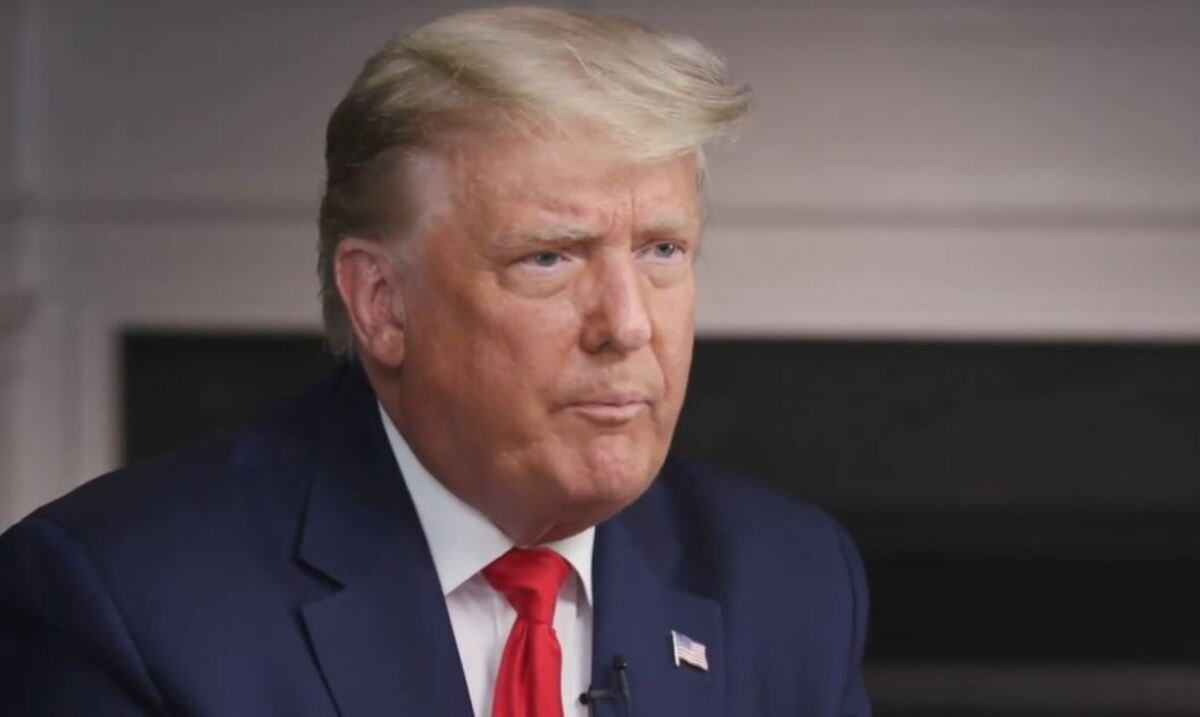 The interview was set to be shown this Sunday, as part of an episode that will also include interviews by Stahl with Joe Biden and Kamala Harris. Mike Pence was also set to be interviewed but after Trump cut off the conversation with Stahl, Trump refused to come back during Pence’s interview. Even before today, it seemed clear Trump objected to the interview because Lesley Stahl asked him actual questions.

After complaining about the interview on Twitter, the Trump White House proceeded to release the full, unedited footage, in violation of their agreements with CBS. CBS took to their own Twitter feed to denounce this move, but now the footage available to watch on Trump’s Facebook page here.

Posting the raw footage, was, I think, an attempt by Trump or his enablers to make the President look like a hero standing up to unfair questions from a mean reporter lady but … all it does it make Trump look, again, like an immature, unintelligent oaf who can’t tell the truth or give a straight answer to save his life. Every time this man speaks now, it’s all bad. And this interview, where he’s hoarse and lacks energy, is particularly damning.

At the beginning of the interview, Stahl says “are you ready for some tough questions?” And Trump’s answer is a resounding “No.” It’s abundantly clear from the get-go that Trump thinks a “fair” interview is one where he’s allowed to lie, misdirect, deflect, and not be forced to talk about things that make him look bad, like his disastrous response on the coronavirus pandemic.

In a weird exchange at the beginning of Trump’s 60 Minutes interview, he tells Lesley Stahl he’s not looking for tough questions — just fairness. pic.twitter.com/Bb85zgd5fn

By the end of the interview, Trump has returned to this. Hurt and angry about being asked such “tough questions,” he starts complaining again, comparing this interview to those with Joe Biden (and also making me wonder if he knows at all who Lesley Stahl is).

When Stahl pushes back and asks why he as President shouldn’t be accountable to the American people, he also has no answer. Then Trump cuts off the interview, he does it because the questions are getting too hard and he tells Stahl that he only agreed to the interview because he thought she would be nice and give him softballs. Whoops.

In the footage he released of his 60 Minutes interview, Trump complains about getting tough questions and Lesley Stahl reminds him that he is president of the United States. Trump eventually quits the interview and won’t go on. pic.twitter.com/qdCHbK1aYc

It’s baffling to think that Trump thought that any of this disastrous interview would be flattering to him, and given that he had no idea what CBS would choose to show or not show, it’s even more bonkers that he thinks that providing people with this footage in its damning entirety will do anything but hurt him more.

And let’s be clear here, nothing he actually says when answering Stahl’s tough questions is good. He lies about the economy and Stahl calls him on it.

He can’t give a good answer about why COVID is getting worse (it’s just cause we’re testing more! No).

Trump tells 60 Minutes that virus infections are up because more testing is being done. He has frequently used this to deflect from the high number of infections and deaths in the United States from COVID-19 (the most deaths in the entire world). pic.twitter.com/unM8Ufbxtc

He doesn’t like getting told his rallies aren’t attended, then goes on an unhinged rant about healthcare. He won’t answer a simple “How?” when asked how he’ll replace Obamacare, which he hopes the Supreme Court will end; he says he has large sections of a plan done or that he will have one … it would seem that, surprising no one, Donald Trump is lying!

Trump still continues to promise his nonexistent health care plan. He then says regarding Obamacare and the Supreme Court: “I hope that they end it, it will be so good if they end it.”

Asked how he will protect preexisting conditions, Trump continues to have no answer. pic.twitter.com/6sKUJEdjzX

Can’t wait for this guy to complain at the debate tonight that the questions are too mean there too.