The crowd chanted "Send her back" as Trump looked on approvingly. 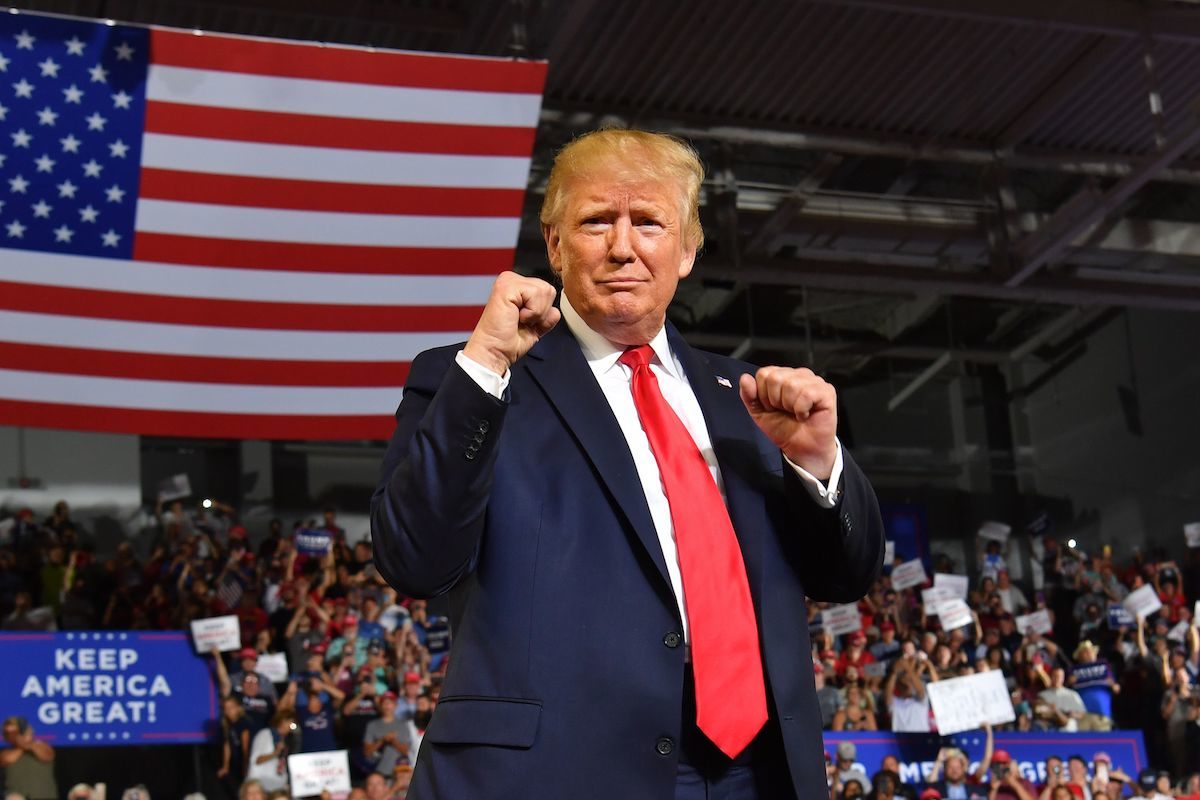 At a campaign rally in North Carolina last night, Donald Trump and his supporters found a new enemy. The usual chants of “lock her up!”–because nearly three years after being elected, Trump still hasn’t given up his love of vilifying Hillary Clinton—were replaced with “send her back!”

The chants began when Trump mentioned Rep. Ilhan Omar and the crowd of thousands responded by calling for the president to illegally deport a sitting Congresswoman who has broken no laws, who’s done nothing but criticize his leadership and rebuff his racist attacks on her. And Trump didn’t just allow these chants; he encouraged them.

Trump fans eventually break out in “send her back!” chants directed toward Ilhan Omar, a Somali refugee who serves in Congress who Trump viciously smeared. pic.twitter.com/LX3eAEkfci

The crowd at Trump’s rally chanting “send her back” after the President viciously and dishonestly attacked Ilhan Omar is one of the most chilling and horrifying things I’ve ever seen in politics.

This is not just bigotry on parade (although it is most definitely that as well); this was a terrifying display of fascism. That’s not hyperbole—that’s what it was, according to historians and scholars of fascism.

I am not easily shocked. But we are facing an emergency. Journalists must not get away with sugar coating this. This is the face of evil. https://t.co/XD0OAHvZao

In my book “From Fascism to Populism” I explain why trumpist racism makes his populism closer to fascism than ever before https://t.co/UHoIP9ShZB

Here are a few: He has trained them so well that they turn his latest hateful thoughts into campaign slogans. They enjoy the thrill of being able to express hatred sanctioned by the Leader. I was just writing about this feeling…among Nazis. https://t.co/WWzjMILAA2

Historian Jon Meacham on Pres. Trump’s tweets regarding congresswomen of color: “He has joined Andrew Johnson as the most racist President in American history.”https://t.co/fzM9K8Iu2H

This isn’t a new concern and both historians and scared voters have been aware of the parallels between Trump’s rhetoric and past fascist leaders since basically the day his campaign started.

You’re not going to frighten anti-intellectuals with being “on the wrong side of history.” History is one of those things in books they don’t read.

We have to make them believe they’re on the wrong side of right fucking now.

This rally came right on the heels of a ridiculous spectacle in Congress where the House voted to officially condemn Trump’s racist tweets, and Republicans responded by trying to censure Nancy Pelosi on the grounds that there is apparently a rule in place prohibiting a lawmaker from calling the president racist. Rep. Emanuel Cleaver II of Missouri, who was presiding at the time, dropped his gavel and walked out. He accused House members of not acting in good faith, saying they “want to just fight.”

Dem Rep. Emanuel Cleaver abandons the chair, slamming the gavel and storming out of the chamber.

“I’ll dare anybody to look at any of the footage and see if there was any unfairness. But unfairness is not enough, because we want to just fight. I abandon the chair.”
Via CSPAN pic.twitter.com/PFHdtf8eOc

For those trying to figure out the Cleaver moment, a presiding officer does not abandon the chair. It does not happen.

This was an unprecedented free verse moment of a presiding officer just giving up on the rules and the members and walking out.

Eric Swalwell had a similarly remarkable moment on the House floor.

Republicans flipped out as Rep. Eric Swalwell ran through a list of racist Trump statements and positions on the House floor. pic.twitter.com/OFk1ySStpe

I’m glad Swalwell is out of the Presidential race, but that video made my respect for him jump by about a million percent. Trump is spewing racist hate online, to reporters, and at rallies, and working as hard as he can to amass a fascist dictatorship. To hell with decorum.