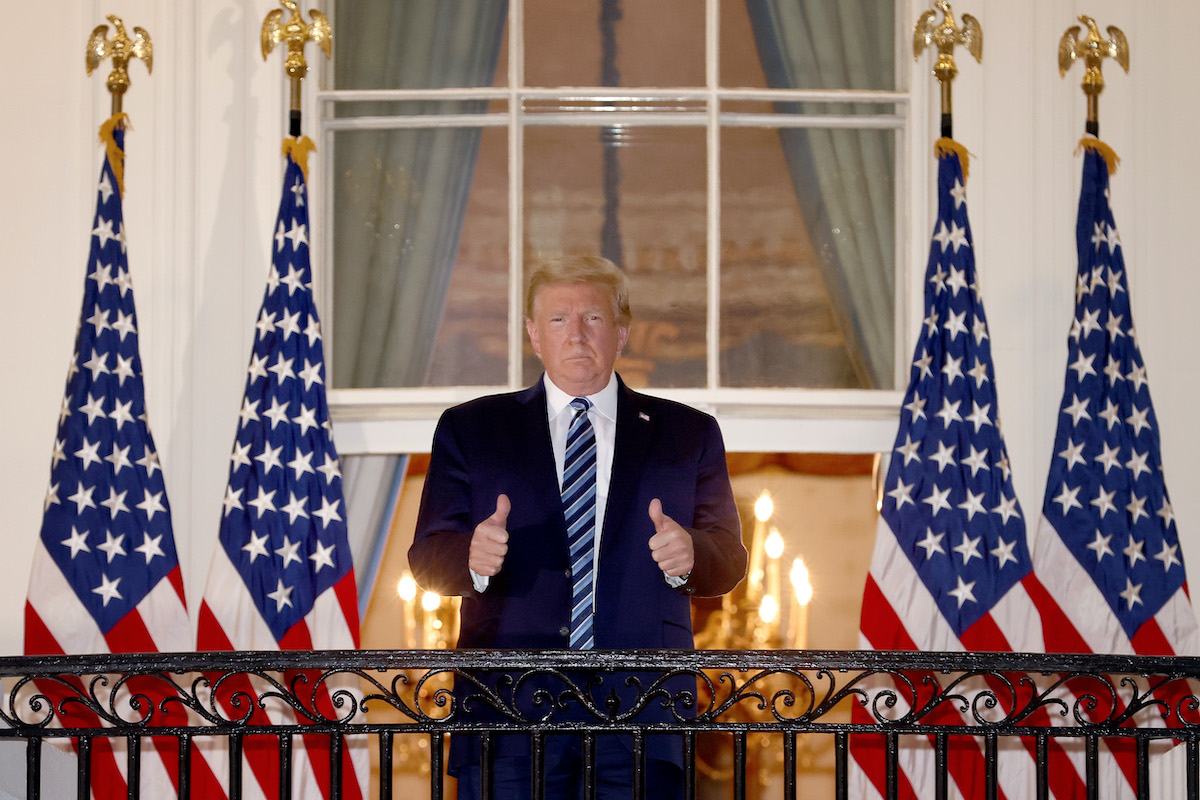 At a time when every hour is a year long, there’s been plenty to be angry about since Donald Trump left Walter Reed hospital Sunday for a spontaneous joyride with his Secret Service motorcade, but I haven’t been able stop thinking about the incredible selfishness of that decision.

As a reminder, Trump spent two nights in his lavish six-room hospital suite complete with crystal chandelier before reportedly getting so antsy he forced the Secret Service to drive him around the block to wave at people.

The Presidential SUV he chose to get into just a few days after what is believed to be Trump’s first positive test result (although he won’t tell us for certain!) is hermetically sealed with an auxiliary air supply–a precaution designed to protect the vehicle’s occupants from a chemical attack, but which probably makes it the worst possible place to be trapped with someone infected with an incredibly contagious virus.

James Phillips, an attending physician at Walter Reed, tweeted about the “insanity” of Trump’s drive-by stunt.

Every single person in the vehicle during that completely unnecessary Presidential “drive-by” just now has to be quarantined for 14 days. They might get sick. They may die. For political theater. Commanded by Trump to put their lives at risk for theater. This is insanity.

That Presidential SUV is not only bulletproof, but hermetically sealed against chemical attack. The risk of COVID19 transmission inside is as high as it gets outside of medical procedures. The irresponsibility is astounding. My thoughts are with the Secret Service forced to play.

The only way Trump could think this was an acceptable thing to do is if he doesn’t think about those around him as actual people entitled to their own health and safety—which seems to be the case.

As Trump returned to the White House, he continued putting others at risk. He made a big show of taking off his mask while standing on the White House balcony. The defense offered was that he was alone on the balcony, so he shouldn’t have to wear a mask. Except he was not alone.

Trump campaign spokesman Hogan Gidley just claimed on Fox that Trump was “alone on the balcony outside” when he was maskless.

He was not alone. There was a photographer right behind him. He then walked inside, and there were at least two other people visible near him there. pic.twitter.com/HbG6PcdzNj

Aside from the fact that Trump has tested positive and Biden hasn’t, and aside from the symbolic aspect, it’s just entirely false that Trump was “hundreds of feet away from everyone” when he went maskless. He was just a few feet from photo/video staff, including when indoors. pic.twitter.com/9Yh89whRVG

This is all too reminiscent of an anecdote the went around Twitter earlier this summer about a barista who asked a customer to put her mask on. The woman responded, “Why? There’s no-one in here.” That woman, like Trump, just doesn’t see staff as actual full humans.

This morning, the young barista woman told me that a customer came in with a mask, but not wearing it. When she asked the customer to put on her mask please, the woman said: “Why? There’s no-one in here.”

About a dozen members of Trump’s inner circle have tested positive for COVID-19, from his wife to his press secretary to his campaign manager. But many more outside of that circle have contracted the virus, presumably due to their proximity to Trump and others who attended the apparent superspreader Rose Garden event last weekend—although the White House is refusing to do contact tracing for the event, so it’s impossible to say for sure, which I imagine is the entire point.

Here are just some of the people in Trump’s orbit, but outside of that inner circle, who we know have tested positive in the last week or so. (It’s worth noting that the Secret Service does not report positive cases for security reasons.)

—At least two members of the White House housekeeping staff

Do they also get to take a helicopter to Walter Reed https://t.co/NYxSsbRMSV

Despite what Trump might think, these are all actual people.