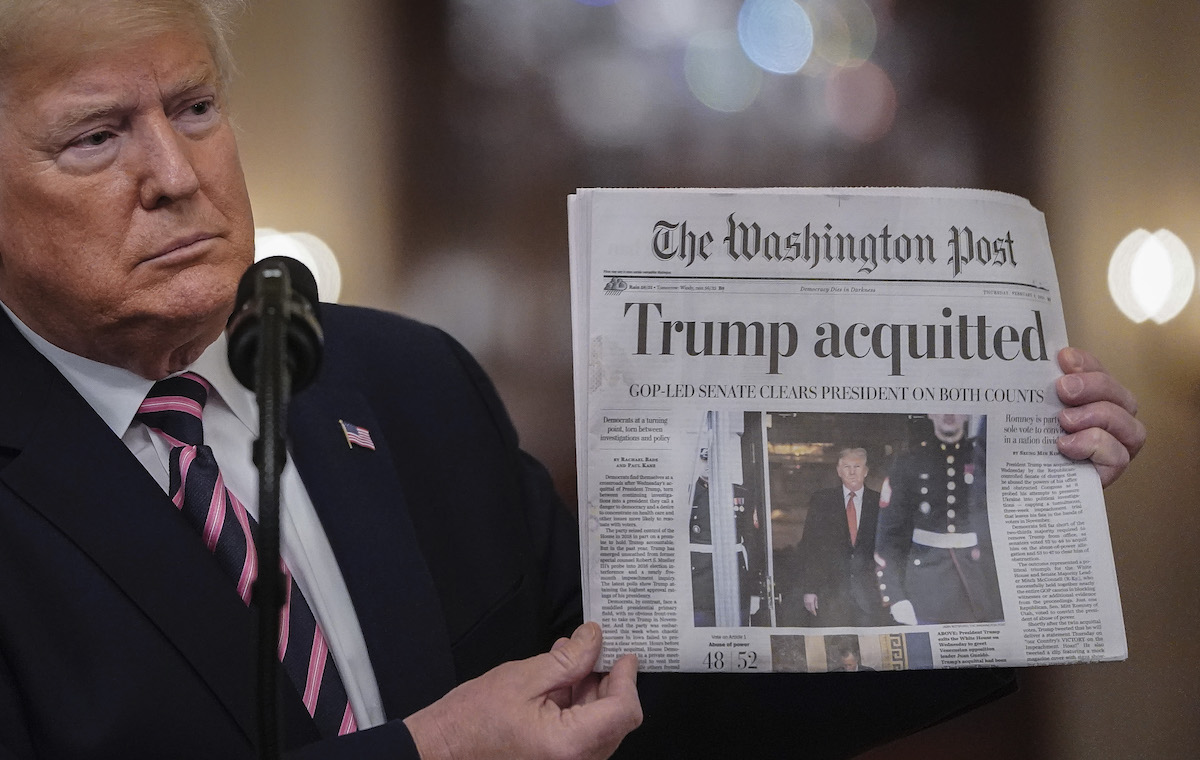 Remember back during the impeachment trial, when Adam Schiff got Republican Senators so riled up by suggesting they had been threatened with retaliation if they didn’t support Donald Trump 100%? All Schiff did was repeat a report from CBS News, which claimed a source close to Donald Trump said key senators were warned, “Vote against the president and your head will be on a pike.” He said he didn’t know if it was true and that he hoped it wasn’t true, but Republicans were absolutely livid at the implication that they could possibly be concerned with retaliation from Trump.

So I’m sure all of those Republicans are absolutely shocked that Donald Trump is now, in fact, retaliating against those who didn’t show him unwavering support, right? Surely they must be speaking out against such actions?

Lol, no of course not. First, they stayed silent as Donald Trump Jr. called for Mitt Romney–the lone Republican who voted to convict Trump on one of the two articles of impeachment—to be “expelled” from the Senate. They stayed silent as Donald Trump spent the entire weekend tweeting and retweeting insults at Romney. And now they’re staying silent as the chair of the Conservative Political Action Conference tacitly condones violence against the Senator.

CPAC is a huge annual gathering of conservative voices. Here’s the petty message its chair, Matt Schlapp, tweeted after Romney announced he’d be voting to convict Trump on the abuse of power charge:

BREAKING: The “extreme conservative” and Junior Senator from the great state of Utah, @SenatorRomney is formally NOT invited to #CPAC2020. pic.twitter.com/f35tYy73V1

This weekend, Schlapp went on Fox News and doubled down on that tweet, saying that Romney wouldn’t be credentialed to attend the conference “as a conservative,” though, he added, “I suppose if he wants to come as a nonconservative and debate an issue with us, maybe in the future we would have him come.”

“This year, I would actually be afraid for his physical safety because people hate him so much,” Schlapp said.

While that’s not a direct threat, it’s certainly not the condemnation of violence we’d hope to hear from someone in his position when talking about the event he chairs and the possibility of violence towards anyone, let alone a sitting senator.

Closer and closer to saying the quiet part loud. https://t.co/l0cEXthte0

Romney isn’t the only one facing retribution for his role in Trump’s impeachment. Over the weekend, Trump fired impeachment witness Lt. Col. Alexander Vindman. In fact, he didn’t just fire Vindman, but also Vindman’s twin brother, Lt. Col. Yevgeny Vindman, who served on the National Security Council and had no role whatsoever in any stage of the impeachment process.

I just can’t get over the silence from elected Republicans over the petty dismissal of a military officer for the crime of responding to a subpoena and telling the truth.

In other news…Lt. Col. Alex Vindman’s brother Yevgeny has still gotten “no explanation whatsoever” for his firing from NSC on Friday, source w/direct knowledge tells me.

Firing Alex Vindman is gross enough on its own, but I would *love* for someone to explain to me how firing his brother too isn’t blatant retaliation.

Trump also fired Gordon Sondland, the ambassador to the European Union who testified in the House impeachment inquiry.  A number of Republican senators did reportedly ask Trump not to fire Sondland but rather to let him leave quietly on his own terms. Sondland, by the way, is the guy who got that job after donating a million dollars to Trump’s 2016 campaign.

Also in this story: Republican senators did not try to stop the firing of Lt. Col. Vindman, a decorated military officer whom they saw as a political enemy, or his caught-in-the-crossfire twin brother. Neither of the Vindman brothers are significant GOP donors like Sondland. https://t.co/sYqfC2ZGOO

What a bunch of cowards.