Wait, WHAT Did Trump Say About Hispanics at His Last Rally? | The Mary Sue 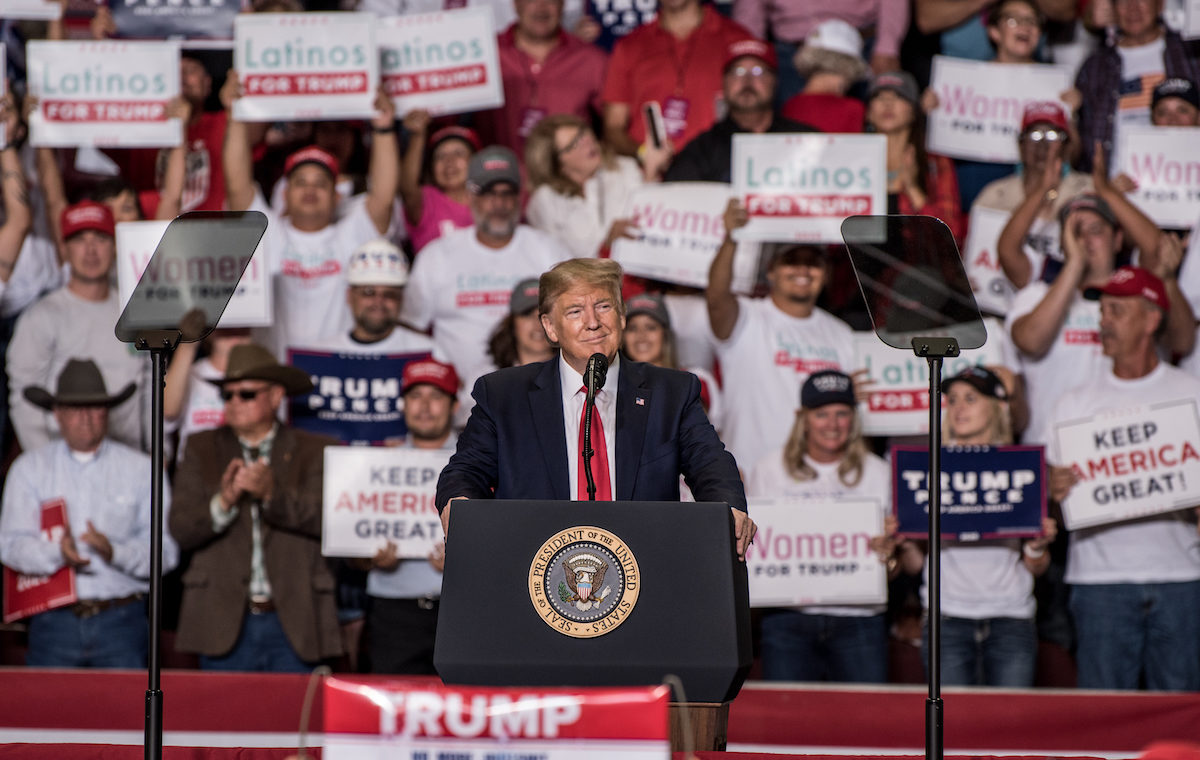 At a campaign rally in New Mexico Monday, Donald Trump appeared to be heavily courting Latinx and Hispanic voters while also making it quite clear he has no idea how to do that. With a crowd of supporters in “Latinos for Trump” t-shirts behind him, he mentioned that this week kicks off Hispanic Heritage Month.  “Who’s Hispanic here?” he asked the crowd. “Incredible people … we have much to celebrate.”

From there, he let everyone know that he has one whole Hispanic friend (who’s actually an employee), even though, as Trump put it, “He happens to be Hispanic, but I’ve never quite figured it out, because he looks more like a WASP than I do.” Yikes. But he kept going.

“I tell you what, there is nobody that loves his country more or Hispanic more than Steve Cortes,” he said of that friendployee from his Hispanic Advisory Council.

“Nobody loves the Hispanics more,” says the man who frequently talks about a Latino “invasion” and calls immigrants and asylum seekers murderers and rapists while taking their children and locking them in cages. “Who do you like more, the country or the Hispanics?” he then asks Cortes directly. “He says the country. I don’t know. I may have to go for the Hispanics, to be honest with you. We’ve got a lot of Hispanics. We love our Hispanics. Get out and vote.”

Once again, Trump is acting under the presumption that any non-white/Christian/cis/hetero/male person has to choose between an allegiance to that part of their identity or to the United States. Because Trump has made it very clear that he views anything but white Christianity to be not inherently American, that those are mutually exclusive identities, and that those people must pick one loyalty over the other.

Trump asks, “Who do you like more, the country or the Hispanics?”

This is meant to make people see Latinos are different from them. We are not. To his Latino supporters, notice he didn’t differentiate between “Republican or Democrat Hispanics…” he said Hispanics meaning ALL.

As someone who’s been racially profiled as LatinX, I know what it feels like, but I do not speak for “the Hispanics”.

However, I am aware that when someone says, “do you love your race or your country more?” they are a racist.

Thanks for trying and failing, @KurtSchlichter. pic.twitter.com/HSftIksjCT

Did you know: Hispanics come in all shades, and can be all kinds of fractions of Hispanic (half, a quarter, etc) from many different countries, generational experiences as immigrants or long-time UD citizens. Some prefer Latino/a/x, or American, or their country of origin. https://t.co/v2YDjGG3cb