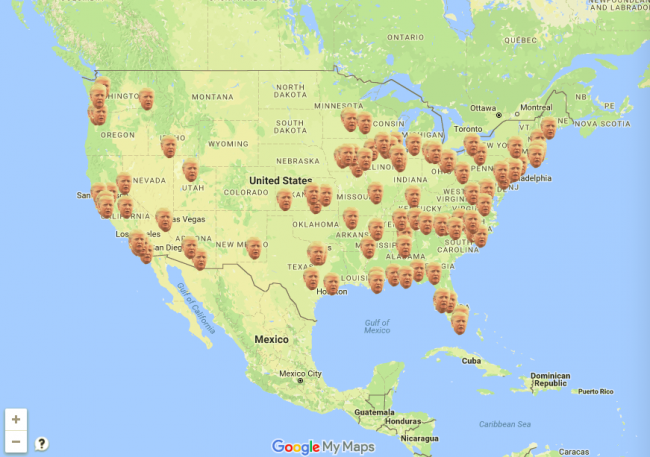 In what has come to be known as the “Trump effect” (previously the “Brexit effect”), the occurrence of hate crimes across the country has spiked in number in this single week since the election. To track these occurrences and their location, an organization called America’s Voice has created the “Donald Trump Hate and Violence Map,” which is embedded below.

The data for this map is generated through reports given to the America’s Voice website, which offers information and resources regarding immigration reform. As well, they pull their information from news reports about Trump supporters. For example, one report from here in the Bay Area cites a Huffington Post article about a “Trump admirer” who threatened to “bomb all Muslims.”

In the first week of the 208 (or more) weeks that will come to define Trump’s administration, the Southern Poverty Law Center has recorded over 400 incidents of “hateful intimidation or harassment.” You have, more than likely, seen such incidents talked about on Twitter or Facebook, or (god forbid) you’ve experienced something similar yourself. It’s no secret at all that Trump’s election has not only inspired white supremacists, misogynists, and literal Nazis, but it’s also given them motivation to mobilize and act out against people of color, LGBTQIA people, women, and every intersection thereof. This election has brought to light the previously subterranean (though in still many significant ways overt) hateful people at the heart of this country.

The incidents of hate and prejudice listed here will surely grow in the coming months and years, and the mere thought of that becomes something altogether terrifying. Now that people with ties to these hate groups are being placed into power, it’s also possible we’ll see such behavior normalized; it’ll be something to be expected rather than not.

By not hesitating to call out such incidents when they happen and by tracking them here in the somewhat indelible medium of the internet, perhaps we can make it even more clear just what Trump’s America will look like. Though, to be honest, if it wasn’t clear enough already, one has to wonder just what it’ll take to get people to realize what so many of us have been saying for so long?

If you find yourself the target of hateful intimidation or harassment, first of all reach out to your friends and family for support. If you’re in a position of privilege such that contacting law enforcement won’t jeopardize your safety or the safety of others, then report the incident to them. Then, possibly consider reporting the incident to America’s Voice or the Southern Poverty Law Center. While data and facts didn’t exactly win the election, it won’t hurt to continue to keep track of these things.

Look out for each other where you can in the coming years. Remember that safety pin you’re wearing as an ally isn’t just an accessory. It’s a promise to help.