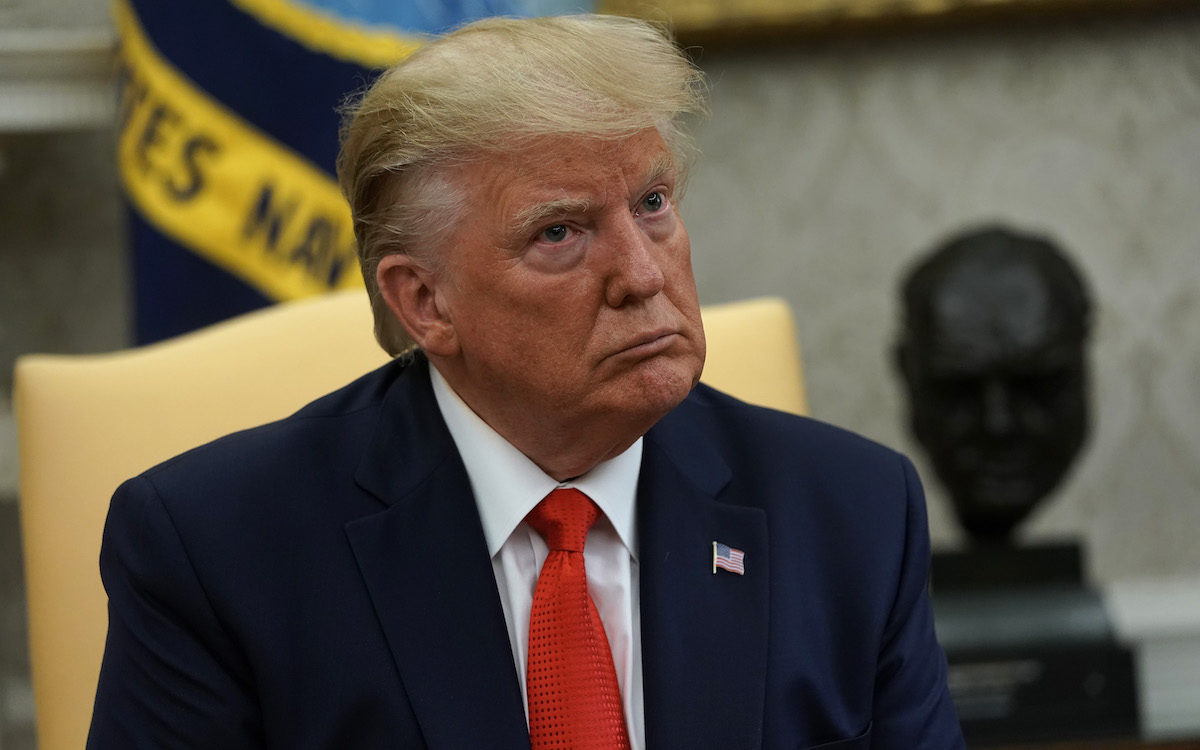 Donald Trump has proposed banning flavored e-cigarettes after hundreds of people across the country have mysteriously gotten sick and six people have reportedly died from vaping-related illnesses. He told reporters that vaping is a problem especially “as it pertains to innocent children.”

It’s true that Juul and other vaping brands have been accused of targeting teens, both with the use of sugary flavors and specific social media campaigns. Trump said that this is the reason why his wife Melania Trump cares so deeply about the issue—because of “her” young son. He apparently forgot momentarily that he too has a young son and that they are the same person. Oops.

President Trump on vaping: “We can’t allow people to get sick and we can’t have our youth be so affected. That’s how the the First Lady got involved. She’s got a son, together, that is a beautiful young man and she feels very, very strongly about it.” https://t.co/bsOvmK11Bs pic.twitter.com/IzK91Ubxwd

Anyway, the Trump administration is now pushing for the banning of all non-tobacco-flavored e-cigs. And, on the one hand, no one that doesn’t benefit directly from young people using those products wants them to be marketed or sold to the youth. So sure, maybe some increased penalties or other security measures or whatever it took to end those Joe Camel ads in the ’90s could be useful.

Unlike my editor Kaila Hale-Stern who would like the administration to pry her mango Juul pods from her cold, dead hands, I have no personal dog in this race. I do, however, have the exact same reaction as apparently everyone else on the entirety of the internet, which is, essentially:

Really? You’re going to claim to be so concerned about the safety of our youths over illnesses related to e-cigarettes, but not over the constant shootings that specifically target schools, food festivals, and other places where young people gather? Really?

If you’re concerned about the health risks of vaping, you’re going to really lose it when I tell you about guns.

Weird how 6 people die from vaping and the federal government institutes a ban within weeks, but 20 kindergarteners, 22 people at a Walmart, 49 at a nightlcub, and 58 at a concert are shot and killed and there’s nothing that can be done.

If people are getting sick and definitely if they’re dying, there are obvious concerns that need to be addressed. But there are also questions and observations that seem pretty damn relevant.

Vaping is hurting the tobacco industry. Period. It’s not about health concerns.

And, as writer Jia Tolentino—who wrote an in-depth exploration of the rise of Juul and vaping in general for The New Yorker last year—explained on Twitter, criminalizing and deregulating vaping products will have the exact opposite effect Trump says he’s aiming for. The entire reason why people are getting sick is very likely because of the knock-off, unregulated products that will continue to exist if products and brands like Juul are forced off the market.

Basically all these vaping-related hospitalizations are directly linked to black-market or knockoff THC oil. The shady stuff & untested devices are what make people sick: banning flavored e-cigs is gonna get ppl back on cigarettes & make the black-market problem way worse

This will, however, satisfy the sorts of voters who see a headline about vaping teens dying and think he did anything to actually solve that non-epidemic. But, as per usual with anything Trump says, there’s probably a corrupt motive behind it, it won’t benefit the people he says it will, and it will hurt way more people in general.