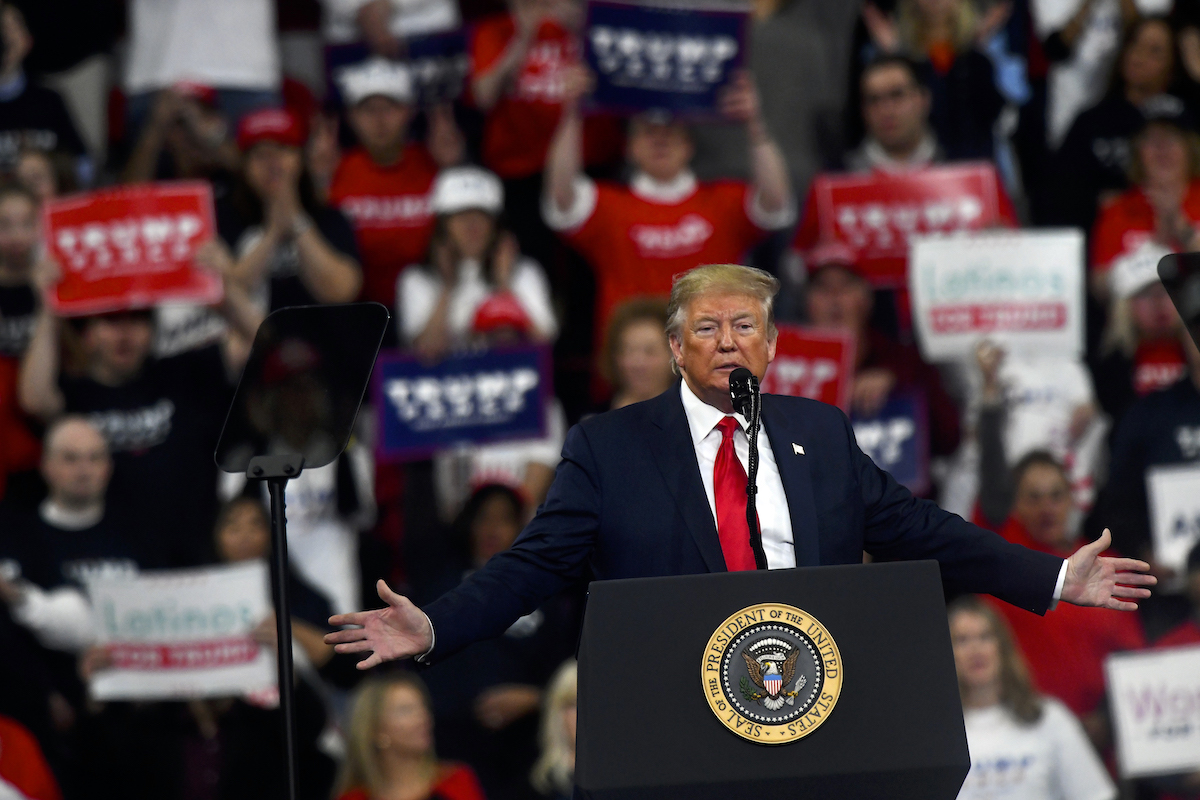 For months, Donald Trump and his supporters have been “joking” about him serving a third term in office.

Back in June of this year, he tweeted about how “GREAT” the country is doing and asked “do you think the people would demand that I stay longer” than the end of his second term.

In September, he referenced going beyond two terms three times in two days. He joked about it with FIFA president Gianni Infantino, saying he’d have to extend his term until the World Cup comes to North America in 2026. He repeated the joke that night at a rally and mocked the expected press coverage.

If he didn’t want people to take his words seriously, he could have just stopped saying them. Instead, he doubled down with this picture the next day:

Later that month, he repeated the comment at a closed-door event with American diplomats. He mocked the press, telling the audience he only jokes about extending his term “to drive them frickin’ crazy.”

But not everyone buys the idea that Trump isn’t serious, or at least keeping the idea in his pocket. He’s the king of the “I wasn’t serious unless you’re onboard and then yes, I’m totally serious” maneuver.

I’ll be on @seanhannity 2nite @FoxNews at 9pm ET and will explain how @realDonaldTrump will be eligible for a 3rd term due to the illegal attempts by Comey, Dems, and media , et al attempting to oust him as @POTUS so that’s why I was named to head up the 2024 re-election.

Huckabee did appear on Hannity’s show Thursday night with a chyron reading “Extreme left has meltdown over Huckabee’s Twitter joke.” Which … is not exactly what happened. First of all, for a “joke” to work, it should be funny in literally any sense. You can’t just string words together and call it humor. His tweet was a lie or, at best, trolling. To call it a joke is giving himself far too much credit.

Second, I wouldn’t call the reaction a “meltdown.” Some people were rightfully confused/scared. Because again, no one really believes (or should be believing) that Trump and many of his supporters don’t see this as a possibility to be considered.

trump keeps making comments about not leaving office. He’s not kidding and Democrats need to take this shit seriously pic.twitter.com/uzOBhlRK53

But no one was “melting down.” For the most part, the responses were just pointing out how idiotic he sounds.

Look up the 22nd Amendment of the United States Constitution.

Yes, by all means, tune in to hear from the great constitutional scholar, Mike Huckabee. https://t.co/TTL7jOQhWU

The only reason anyone should even mention Mike Huckabee’s name at this point is to remind people that he’s a #DogKillersDad. https://t.co/CAlQuhqy7h

For some background: The only president to serve more than two terms was FDR, who died during his fourth term in office. Since then, the 22nd Amendment has been ratified, which limits a president to two terms, with a maximum of 10 years in office in case a vice president succeeds a president during an existing term at the midway point or later. Some presidents have tried to challenge the amendment, including Trump’s idol Ronald Regan, though none have been successful.

It’s also important to note that the language of the amendment specifically says “No person shall be elected” to a third term. So constitutionally, no, Trump cannot run for reelection in 2024. But realistically, it’s easy to imagine him trying to just stay in office without an election, dictator-style.

Trump is always talking about how “unfairly” he’s been treated. He’s one step away from declaring that grounds for a do-over term. And the Republicans in Congress have been happy to move the political goalposts in whatever ways will allow them to hold onto power. (*Cough, Merrick Garland, cough*)

Even if this isn’t an immediate concern, it’s really weird to see Hannity and Huckabee cracking up over it. Just a couple of grown men using a hugely influential platform (with Trump definitely watching from home), cackling about owning the libs over a constitutional crisis. You’d sure think there would be better ways to use that air time.

(image: Mark Makela/Getty Images)
Want more stories like this? Become a subscriber and support the site!