WTF. This is the description of a book being published by Kensington. WTF WTF pic.twitter.com/sZnxcA6rPN

You see, the one thing that I can’t deal with is self-righteous people who get off on mocking the needs of others—not to mention profiting via such tactics. What were you thinking, Kensington Books?

YA author Sarah Nicolas noticed the description of a book forthcoming in August from Kensington Books, a real place that publishes books of some purported value and not unmitigated garbage better left to Steve Bannon Press. (Is there a Steve Bannon Press? Oh god, there probably is, isn’t there.) Here’s the description of “Trigger Warning” in full:

JOHNSTONE COUNTRY. WHERE OTHERS FEAR TO TREAD.

From the bestselling authors of The Doomsday Bunker, Black Friday, and Stand Your Ground comes the explosive story of a college under seige—and freedom under fire . . .

POLITICAL CORRECTNESS WON’T SAVE YOU

Former Army Ranger Jake Rivers is not your typical Kelton College student. He is not spoiled, coddled, or ultra-lib like his classmates who sneer at the “soldier boy.”

Rivers is not “triggered” by “microaggressions.” He is not outraged by “male privilege” and “cis-gender bathrooms.” He does not need a “safe space.” Or coloring books. Jakes needs an education. And when terror strikes, the school needs Jake . . .

Without warning, the sounds of gunfire plunge the campus into a battle zone. A violent gang of mauraders invade the main hall, taking students as hostages for big ransom money. As a veteran and patriot, Jake won’t give in to their demands. But to fight back, he needs to enlist his fellow classmates to school these special snowflakes in the not-so-liberal art of war. This time, the aggression isn’t “micro.” It’s life or death. And only the strong survive . . .

This time, the aggression isn’t “micro.” Listen, y’all, this almost has a poetic quality to it; I’m going to print it and put it on a t-shirt. THIS TIME, THE AGGRESSION ISN’T “MICRO.” Beautiful. Stunning. Also the stupidest thing I’ve read in my entire life.

how brave of jake not to be upset by microaggressions that have never been aimed at him.

It’s because coloring book activities have been offered on many campuses as a stress reliever. Obviously the only acceptable stress relievers are punching things and shooting human-shaped targets

I will never understand the brutal disdain that some people have in response to others’ desire for society to be a more honest and welcoming space for all. But books like this forward an already unfortunate mocking precedent by giving these ideas, this disdain, the backing of a legitimate publisher. When Kensington Books is putting male privilege and cis-gender bathrooms into air quotes as though those aren’t real things, or real topics worth debating, they are doing everyone—especially this book’s future readers—a disservice.

I’ve been a ‘soldier boy’ for a long time. Never once been sneered at.

I can’t speak for every “ultra-lib,” but I’ve never heard a single word of disrespect used about an individual serving in the armed forces. Those words are used to criticize the poor treatment of veterans by the governmental bodies meant to take care of them or to protest these hard-working men and women being fed into a profiteering war machine and deployed into forever wars.

Yeah, i looked at the backlist, yikes! And this bs plot line does a great disservice to the real issues and struggles of vets (men and women) after extensive deployments.

Further adding to the irony that I’m sure was lost on author J.A. Johnstone—the nephew of author William W. Johnstone, who is dead, and whose coattails are being ridden upon—is the fact that the great majority of violent incidents on campuses and at schools are carried out by angry, gun-toting white men. When was the last time a “gang of marauders” caused a terror incident at a liberal arts college? Who wants to bet this gang is from a “scary” foreign country? I will bet quite a lot.

Two guesses as to what’s happening next as a result of Nicolas’ Tweet! 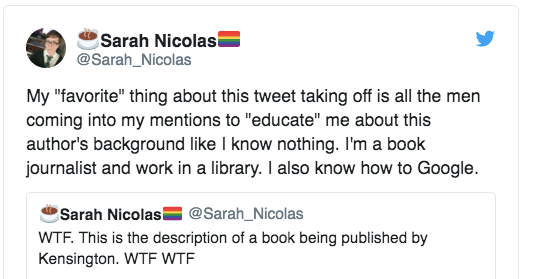