Review: Transistor Is Well Worth Plugging Into

Bastion was something special. Debut titles are risky business, but developer Supergiant Games clearly knew what they were doing. That game had everything: lush artwork, stirring storytelling, and top-notch gameplay (not to mention a soundtrack that hasn’t left my iPod in two years). It knocked my socks off, and my expectations for its follow-up were anything but low.

I mentioned to a friend that I was reviewing Transistor, and he wanted to know if it resembled its older sibling. “Like, with that sort of old-school look, and that narrator guy?” Yes to both, but aside from a few small details, an isometric POV and Logan Cunningham’s warm blanket of a voice are where the similarities to Bastion end. That is, except for one thing: Transistor, too, is excellent.

We begin in the city of Cloudbank, a lavish cyberpunk metropolis. This is a place of color and finery, where gilded concert halls shimmer beside gentle canals and dreamy space-scapes drift across holodeck skies. The music is the perfect pairing, suggesting an environment where both synthetic and organic beauty harmonize together. Art director Jen Zee and composer Darren Korb deserve heaps of praise for the world they conjured here, and I would want to dissolve into it if it weren’t for the danger tearing it apart at the seams. Cloudbank is facing the rabid creep of the Process, a technological solvent overwriting the city. The Process is controlled by the elusive Camerata, who have their own vision for Cloudbank. One of their targets is Red, a famous singer, who finds herself robbed of her voice. We meet her on the worst night of her life, transported across town by the circuit-board sword that failed to kill her. It rests deep in the crumpled torso of a man, someone Red knew well. The sword now holds all that is left of him. This is the Transistor, an esoteric weapon that can absorb traces of those it slays. With her new companion in hand, Red wastes no time in fighting back. She cuts her impractical gown short, dons the dead man’s jacket, hops on a motorcycle, and hunts her attackers down. This is her town, dammit.

Red is a solid heroine (and I’ll return to her shortly), but the real star here is the combat. It’s a hybrid system, an unlikely marriage between real-time hack ‘n slash and turn-based strategy. It has no business being as good as it is—and yet.

When combat begins, Red is fenced in, unable to flee the field. There is no room for defeat. She’s free to run around whaling on things (when cooldowns permit, of course) until she’s allowed to take a turn. This is where things get good. Time stops, a grid appears, and the sounds of fighting melt away, replaced by Red’s sumptuous humming. In this space, the player has all the time in the world to map out Red’s actions. Draw her path around her enemies, trigger one ability here, another there. Once everything’s lined up, just hit the space bar and watch her fly. The ebb and flow between chaotic violence and quiet planning is seductive, symphonic. I can’t say I’ve ever played anything quite like it.

The approach to skills is equally unique. As you progress through Cloudbank, Red encounters Process victims who leave behind combat abilities that can be uploaded into the sword. Red can only have four abilities active at a time, but here’s the fun part: Any abilities that aren’t used can be equipped as upgrades. Crash, for example, is a standard melee action, whereas Purge is a damage-over-time ability. If you set Crash as an active combat ability and use Purge as an upgrade, a DOT is added to Crash’s base damage. But if you set Purge as the active ability and use Crash as an upgrade, the effect is quite different—the DOT now also stuns targets. Every upgrade combo has its own flavor, and the possibilities are intoxicating. You can swap out combos at any save point, and practice areas can be found throughout the city, giving you a safe space to tinker and experiment. This isn’t a simple matter of finding a good build. This is alchemy. This is LEGO. Try a thing, tear it down, start again. And don’t get too comfortable once you find your sweet-spot combo. The punishment for losing all your HP is the temporary loss of one of your active abilities. Not only does this leave you shorthanded during that particular fight, but you won’t be able to access that ability again until you visit the required number of save points. This means that you have to be familiar with everything in your toolbox and flexible enough to change strategy again and again. Transistor doesn’t merely encourage creativity in combat, it requires it. The reward for rising to that challenge comes not only through the satisfaction of gameplay, but through the story as well. Every time you use a new combination of abilities, you unlock corresponding character profiles. By mastering your abilities, you learn more about those who gave them to you—including the voice within the sword, and the woman who wields it. 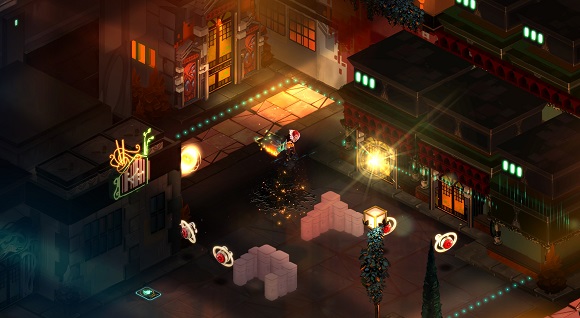 Going into the game, I was aware that Red is a silent protagonist and that the sword does all the talking. I wasn’t concerned about this, exactly, but I was curious to see how Red’s character would come through and how the dynamic between her and weapon/narrator would play out. The answer, I’m happy to say, is splendidly. Red is her own woman, and strangely enough, her lack of a voice makes her emotions all the more visceral. Typically, silent protagonists make themselves known through the actions the player is tasked with, but Transistor goes beyond that. Yes, you get a sense for who Red is in the way she dances around her enemies, but she is even more present in the things she doesn’t do. The sword may be the literal voice here, but Red still has full agency. The moments in which he suggests one thing and she does another gave me the clearest sense of who she is—angry, aching, soulful, dauntless.

That’s not to suggest that the relationship between Red and her sword is antagonistic. On the contrary, their bond was one of my favorite parts of the game. The man inside the Transistor is a welcome companion, and his give-and-take with Red is what makes them both come alive. It’s an odd thing, for a weapon to be the emotional center of a story, but Transistor would’ve fallen flat without the depth the sword gives to Red. It’s through his words that we understand the true scope of loss here—not just Red’s voice and his own body, but Cloudbank and the lives that flourished there. The sword is fiercely protective of Red, but the story is much more about her saving him than the other way around. The deadly instrument Red uses to take her city back is, in all seriousness, the most vulnerable presence in the game. Red is justice; the sword is love.

While the narrative bulk of the game was wholly engrossing, the bookends were where I lost my footing. In the grand tradition of cyberpunk, Transistor is not a straightforward story, and much of it is left up to interpretation. I appreciate that aspect more now than I did while playing. The game doesn’t properly explain the stakes or the key players until close to an hour in, and while I have nothing against a story told out of order, I admit that for a significant amount of time, I was wondering if I had missed something. My PC has been having performance issues as of late, so it wasn’t outside of the realm of possibility that an expository scene had failed to play. I understand that the ambiguity of the opening sequence was meant to pique my curiosity—and it did—but the way in which the names of places and people were used suggested that I should already know what and who they referred to. It wasn’t until the setup was revealed that I felt comfortable settling in.

Similarly, the ending is a trip and a half, throwing abstraction after abstraction at you in rapid succession. After a couple days of chewing on it, I rather like what the ending was saying (or, at least, my estimation of what it was saying—it’s definitely an origami unicorn situation). But in the moment I was puzzled, and for a minute or so, hopping mad. That feeling dissipated with the final image of the game, which brought me right back to puzzled. I think the final act would’ve benefited from a slightly slower pace, a little more time for things to sink in. All the pieces are there, and as I’ve discovered, they make for wonderful conversation. I just wish I could’ve had that conversation with the game itself, rather than with others who have been puzzling over it, too.

As a whole, though, Transistor was a beautiful adventure, one I heartily recommend to RPG fans. Playing through the story on a standard difficulty level took me about five hours, but this excludes many of the enticing optional skill challenges. After you beat the game, you’re free to go back and hit everything you missed (or want to revisit) without resetting your abilities, so there’s lots of opportunity for replay. Supergiant has delivered a quality experience here, and my hat is off to them. With Bastion, they proved that they can make a great game. With Transistor, they not only proved that they can do so again, but that they’re willing to break the mold.

Transistor is available for PC (Windows only) and PS4.