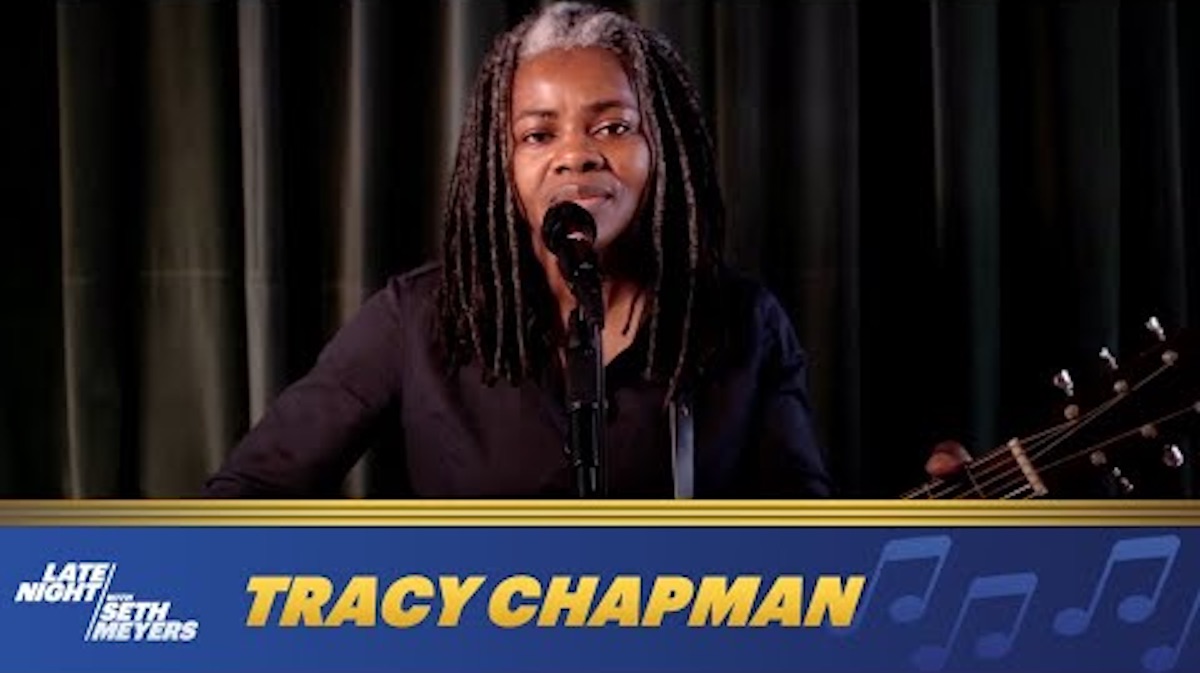 Legendary singer-songwriter Tracy Chapman performed for the first time since 2015, delivering a gorgeous rendition of her song “Talkin’ Bout a Revolution” on Late Night With Seth Meyers. As a lifelong fan of Chapman, this unexpected appearance felt like a gift on the eve of Election Day, as well as a resonant call to action.

Casual music fans know Chapman for her massive hits in the late 80s and 90s like “Fast Car,” which NPR calls “one of the greatest songs ever written about working-class life,” and “Give Me One Reason,” or 2000’s “Telling Stories,” a song and album that cut to the quick of my high school existence and changed me as a person. But for her appearance on Late Night, Chapman chose the second single from her self-titled 1988 debut album, “Talkin’ Bout a Revolution,” which could not have been a more perfect selection as we head into Election Day.

Why was Chapman on Late Night after taking five years away from the spotlight? “This is the most important election of our lifetime. It is imperative that everyone vote to restore our democracy,” she said, per NBC. Seth Meyers said that he was “honored and excited” to have her on the show, noting of Chapman’s remarkable career, “She’s living proof you can be a great artist while also speaking out for what you believe in.”

Chapman’s work has always been unabashedly and unequivocally political. “Talkin’ Bout a Revolution” records her perspective in bold strokes:

“Talkin’ Bout a Revolution” is about the people reclaiming power, and in the years since the song emerged, it has been used as a protest anthem worldwide and an unofficial song for the 2016 Bernie Sanders campaign. Now Chapman has returned to perform her classic at the moment that we need to hear it most.

I didn’t realize how much I, personally, needed to experience the phenomenon that is a live Tracy Chapman performance again. Her vibrant, warm, beautifully distinct voice is as transportive as it was thirty-two years ago, and it’s impossible not to feel encouraged about both the duty to vote and the power of collective action.

I was far from the only Chapman fan moved by her surprise turn on Late Night; she trended on Twitter last night. While I hope this means we might see more of her again soon, if this is all the Tracy Chapman we get for a while, I’m pretty sure I can be sustained by this video alone until the next electoral season. Here’s hoping that will take place in a better world.

Waking up at 4:30AM with election anxiety and the universe has sent a gift in the form of Tracy Chapman performing for the first time in 5 years. This comforted me, I hope it can comfort you too. pic.twitter.com/movDwEI38a

Tracy Chapman is trending – and we thought 2020 was lost pic.twitter.com/8oKA6I78m4

My mom texted to tell me Tracy Chapman was on tv and I kind of didn’t believe her. I looked it up. It’s been 5 years. And tonight she sang this.
Goodnight y’all. https://t.co/p5zeevXzJv

if THEE Tracy Chapman is stepping out for the first time in 5 years to perform for this election, that ballot better be CAST… pic.twitter.com/Q3nGVXDkNu