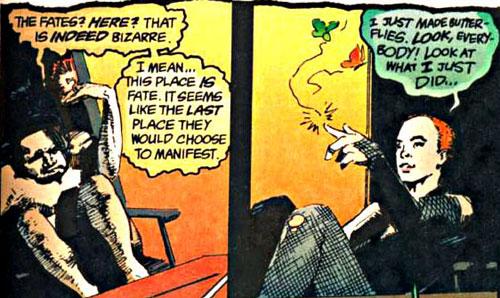 When was the last time you heard someone say, perhaps while in line at the comic store counter, “I don’t normally read this title but I had to pick it up this week.  ______ ______ is my favorite letterer?”

Not recently, huh?  Todd Klein‘s series of alphabet prints have made me wish that it would happen more often.  Klein was responsible for the lettering on Watchmen, Batman: The Dark Knight Returns, Swamp Thing, Fables, Top 10, and a good deal of the comics that made me like comics, including Batman: Year One, and Sandman.  For Sandman, specifically, Klein created seven distinct styles of lettering for the voices of each of the Endless, from Destiny‘s hard italics to Delirium‘s candy colored balloons.

Klein is currently doing a series of alphabetically themed prints showcasing his talent and the talents of some of the biggest names in comics; letters A through E have been completed.

He explains in his blog:

I began to think about producing something new to sell. But, what? Another Lettering Sampler? I’d done that, and a variation didn’t seem likely to be a big success. Then the thought came: what if I asked one of the writers I work with to write something for me to letter? Call in a favor, so to speak.

So far, Klein has solicited words and art from Alan Moore, Neil Gaiman, Alex Ross, J. H. Williams III, and Mark Buckingham.  Intrigued?  The finished prints are quite beautiful, and for sale. Here’s his most recent work, “Each Beast At The Feast,” in collaboration with Mark Buckingham: 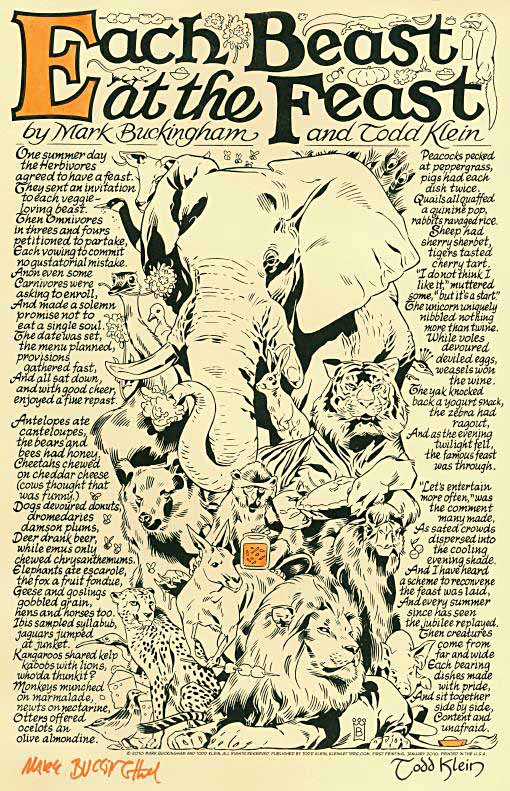 Detailed explanations of the work that went into each one can be found at Klein’s blog, here.