Arrival Review: A Near-Future Sci-Fi Lesson That Says a Lot About Our Present 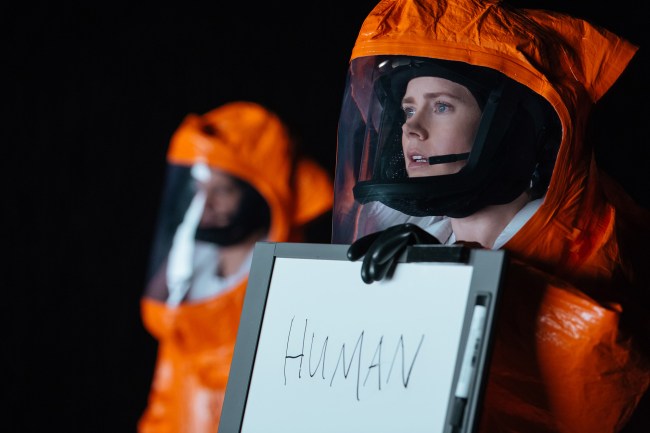 The Spoiler-Free Short of It, or TL;DR
Arrival is a movie that, if released at virtually any other time besides now, would stand alone as a solid, creative entry into the often overly xenophobic, fright-inducing, fantasy-esque science fiction genre. It addresses some of the more difficult concepts around potential first contact, and does so with a kind of subtlety that is absent in many of the other alien-focused powerhouses. This nuanced, excellently-told story is a lesson in superb storytelling, all set against a simply gorgeous backdrop that commands your attention from beginning to end. Sound design, score, and cinematography all harmonize here, enriching the full experience of the film.

There are a few prominent examples of strong female characters in science fiction, and Amy Adams’ portrayal of Dr. Louise Banks surely deserves to be among that pantheon of heroes. Dr. Banks isn’t a gun-wielding, flamethrower-shooting badass, but rather a fine example of a determined woman who never gives up on the romantic ideals of understanding and unification.

There are, it must be mentioned, some odd story choices here and there, though, with some dialogue coming off as awkward and immersion-breaking. If one pays thorough enough attention, the movie’s twist can, unfortunately, be guessed just before the start of the third act, but looking past these (relatively small) criticisms, this is a movie well worth seeing, one that’s poignant, important, and memorable.

Spoilers follow within the full review/analysis. You have been warned.

The Good
The premise of Arrival seems, on its surface, simple enough.

Aliens (dubbed Heptapods, or “seven-feet” in the movie) appear on Earth. 12 ships (or “shells”) each house an unknown complement of xenomorphic forms, none of whom speak any of our Earth-based languages. The U.S. government turns to Dr. Louise Banks (Amy Adams), a linguist whose previous work for the government apparently wowed them enough to keep her info in their rolodex. As well, they’ve employed physicist Ian Donnelly (Jeremy Renner) to partner with Dr. Banks in establishing communication.

Where the story gets complicated is when it comes to showing Dr. Banks’ work in attempting to communicate with the aliens. In this, the film offers an enlightening, intriguing reveal into the study and practice of linguistics.

The whys and wherefores around why we speak as we do are carefully dissected and explored in a story that feels as poignant as ever to our current situation. It was, to be frank, frustrating at times to watch the two parties fail at understanding one another—and I’m not speaking only of the aliens and the humans. While the movie explored how to decode and understand an alien language, it showed us the disconnects and shortcomings within how we communicate with each other.

For example, in their attempts to communicate with the aliens, a hopeful, if not wistful image of the countries of the Earth working together is presented, showing the kind of development that can happen when an entire planet is singularly dedicated to a single cause. But of course that harmony is lost when the concept or the idea of an alien weapon is introduced, reducing humanity to our very basic, tribalistic urges—communication amongst nations falters and then evaporates completely. Rare is the movie that bucks this kind of trend, as more often than not, the greatest drama comes, well, from within the house, so to speak. Knowing this, the movie’s inevitable turn into chaos and discord was predictable.

That doesn’t discount from the movie’s overall impact, not by a longshot. As I said, the story’s incredibly nuanced in its presentation, and it definitely plays off of our expectations, especially with regards to how we expect humanity to handle a situation like this. We’re almost expected to be unimpressed with the inevitable disconnect which, towards the end of the film, sets us up for a fairly strong twist.

Throughout the movie, scenes that are (ostensibly) flashbacks are shown, with Dr. Banks teaching her daughter how to read, speak, and communicate. We’re shown in the first five minutes of the film that her daughter dies of a disease in a very Up-esque sequence, and each of these flashbacks centers completely upon their relationship. Towards the end of the movie, after a series of events that sees the aliens on the verge of fight or flight, Dr. Banks finds herself literally immersed in the aliens’ environment, and the flaskbacks (or visions, as we’re led to believe) are revealed to be not from the past but rather from the future.

As illustrated earlier in the film, the writing style used by the aliens is circular. It’s an entire thought, concept, or sentence in one circular shape. Dr. Banks breaks it down, saying it’s something like if we wanted to write a sentence with both hands from the back and the front at the same time while making it readable in either direction. It, in essence, would break the linear systems and logic we use when it comes to written language.

So, by learning to speak and write in their language, Dr. Banks is granted the ability to “see into the future” and experience time as the aliens do: non-linearly. She exploits this newfound ability by looking into the future to see what she needs to do to, well, “get the good ending” for lack of a better term.

Thus, in her mid-movie description of their language, she also breaks down the twist and the concept of the movie. They do not speak linearly; neither does this movie. It’s not being told with clear distinctions between past and present. It, in fact, plays with our preconceived notions of what we believe a flashback to be and it exploits our understanding of that to great profit. We’re led to believe that the movie itself is abiding by certain storytelling rules, only to reveal that it’s been breaking them the entire time. It has, effectively, redefined the way it communicates as it communicates.

For this alone, Arrival stands as a great example of well-executed storytelling.

The Bad
However, there were parts of the story where I found myself questioning certain characters (what purpose did the CIA agent serve that literally every other member of the military hadn’t fulfilled already), leaps of logic, and more shaky dialogue choices. There’s one line in particular that I’m thinking of where after the twist is revealed and after we learn that Ian is Dr. Banks’ partner/father to her daughter, Renner says in a very Renner-like delivery: “You wanna make a baby?”

It’s a strange, dissonant line laid out in a series of scenes that are intended to be poignant, meaningful, and momentous. While I understand the usefulness and possibly disarming nature of such a joke, it felt like it took the gravitas of the moment down a notch or two. A few folks in the theater outright laughed at the line and couldn’t hold in their chuckles for a little while after—myself included, try as I may have.

As well, the portrayal of China as the first nation to “break ranks” and incite hostile action against the aliens strikes me as, perhaps, a bit of a crass characterization. America was, of course, still portrayed as a country taking measures of its own to secure its borders, but the sense of American exceptionalism won out, casting us as the only nation with enough understanding or empathy to get what the aliens were telling us.

That being said, the film’s true lesson was hidden in the final few exchanges not between us and the aliens but between each other. It was only because Dr. Banks reached out to the Chinese general that an interplanetary tragedy was prevented. It was only because an American defied her “superiors” and reached out to someone considered to be an enemy that the day—and the future—was saved.

The Ugly
Which brings me to my last point: the movie’s release is 100% impeccable in its timing.

On the world scale, we, as a species, have incredible difficulties in communicating with each other. Misunderstandings and disagreements abound, all-too-often resulting in all-out war and loss-of-life. It seems, every day, that we find ourselves on the brink of war not with alien lifeforms but with each other. By presenting the McGuffin of alien spacecrafts as something for humanity to cope with, the movie attempts to show just what unified, collective work and thinking might be able to accomplish.

And, even on the brink of all-out war against creatures we were only just beginning to understand, what it took—and what it will take for us—to save the day was outreach. It was communication through others, not even in our own language, that we find common ground.

I find it important to note here that I’m not trying to shape an “all lives matter” argument, no. Far from it. Instead, what I’m trying to say is that people who believe in such reductivist, simplistic principles should do the work to truly understand what they’re talking about, rather than trying to argue based on half-baked (at best) ideas and concepts. Marginalized people are often the ones forced to do all the labor to try to communicate. Meet us halfway, maybe. That’s what it takes.

Given the fact that we, as a country, are now governed by those who seek to demolish common ground in the name of “purity” and “unity,” the lessons in outreach, understanding, and common communication presented by Arrival are so much more important.

But, and perhaps you can call me cynical or jaded about this, something tells me that these lessons presented aren’t going to be heard or absorbed at all by any of the right people. And that, more than the frustration of not being understood, is so incredibly heartbreaking.