Y'all: these characters are precious. In the best way.

We’ve got a super big preview for y’all today from the fine, fine folks over at BOOM! Studios. They’ve got a new series coming out under their BOOM! Box label called Jonesy, which is a comic based on a young girl in high school with her own zine, secret crushes, and an utter hatred for valentine’s day. She’s basically the girl I wish I could’ve been in high school.

The comic’s written by Sam Humphries with art by Caitlin Rose Boyle. In the short time I’ve had to get familiar with these characters and this story, I’ve already fallen in love. Take that for what you will.

What you’ll find above and below is a really fun “meet the characters” special provided exclusively to The Mary Sue, where you’ll meet Jonesy, her abuelita, her father, and Susan. It’s not clear if Susan is Jonesy’s friend or not yet (though I hope so, cause she seems rad). But each of these characters really has… uh, character. I find myself resonating between Jonesy and her abuelita. I mean… for crying out loud, look at her abuelita’s catch phrase: “Eat all who oppose you.” God, yes. That is me in my twilight years.

Anyway, check them out below plus a four page preview plus solicitation info plus an order form for your local comic store to make sure you get an issue when it comes out on Feburary 10th. You best believe I’ve got mine filled out already. 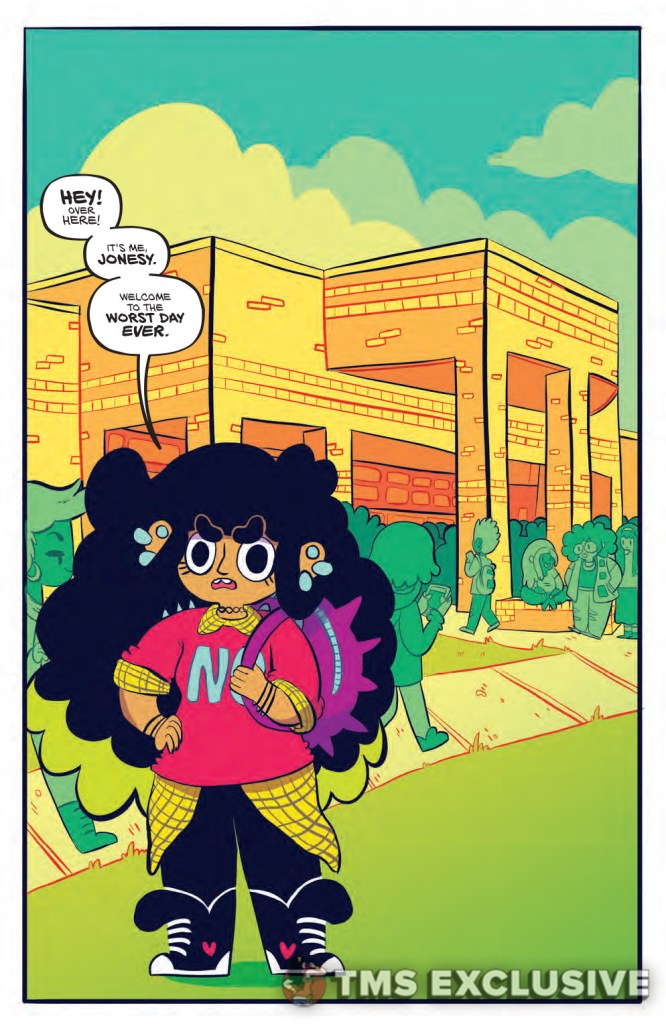 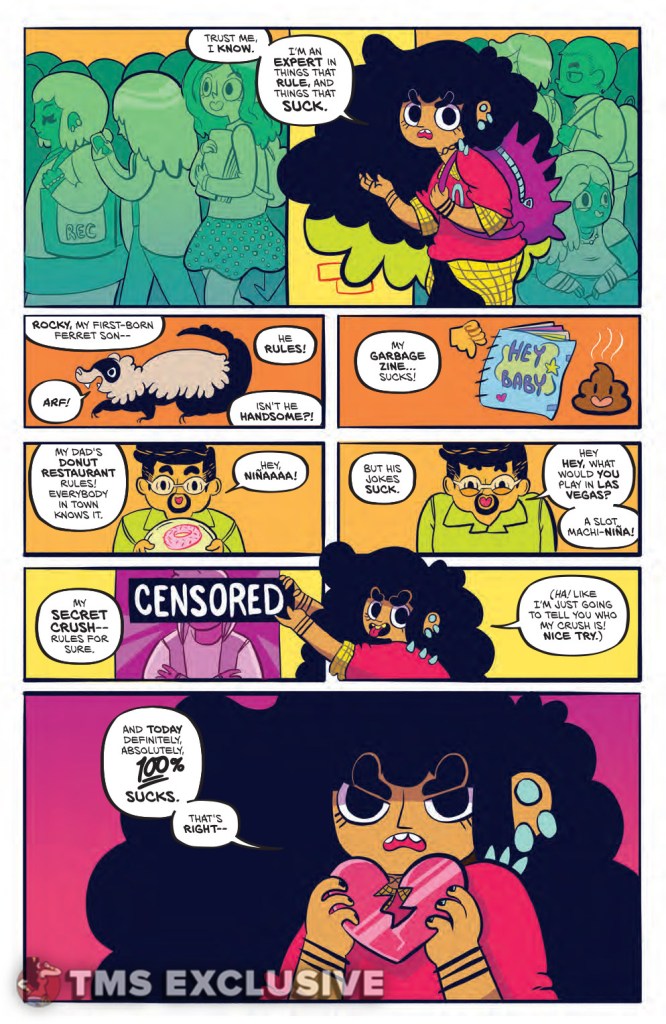 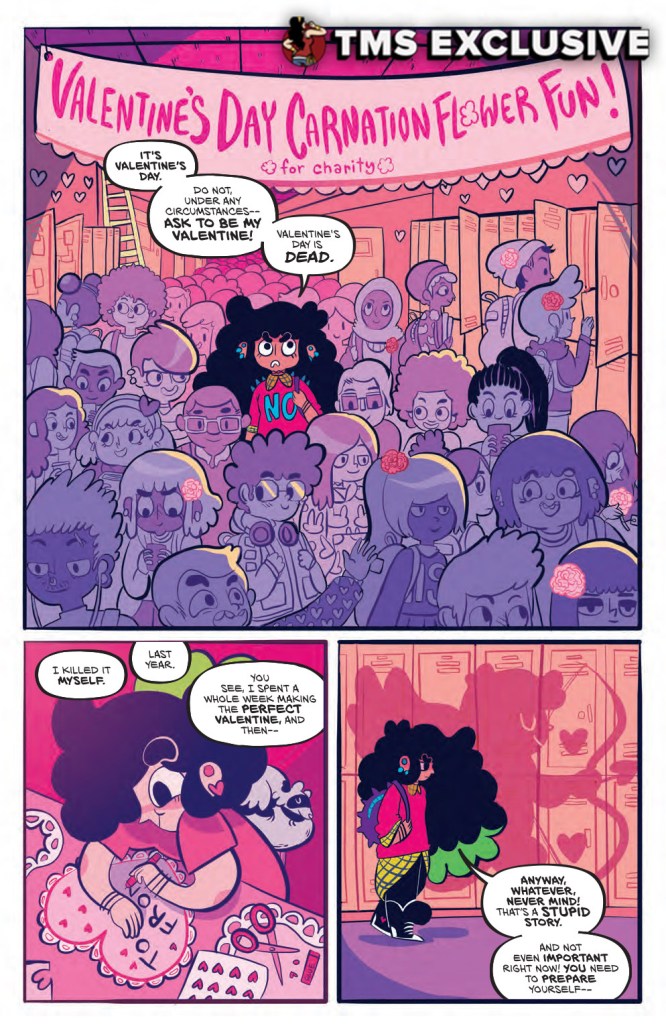 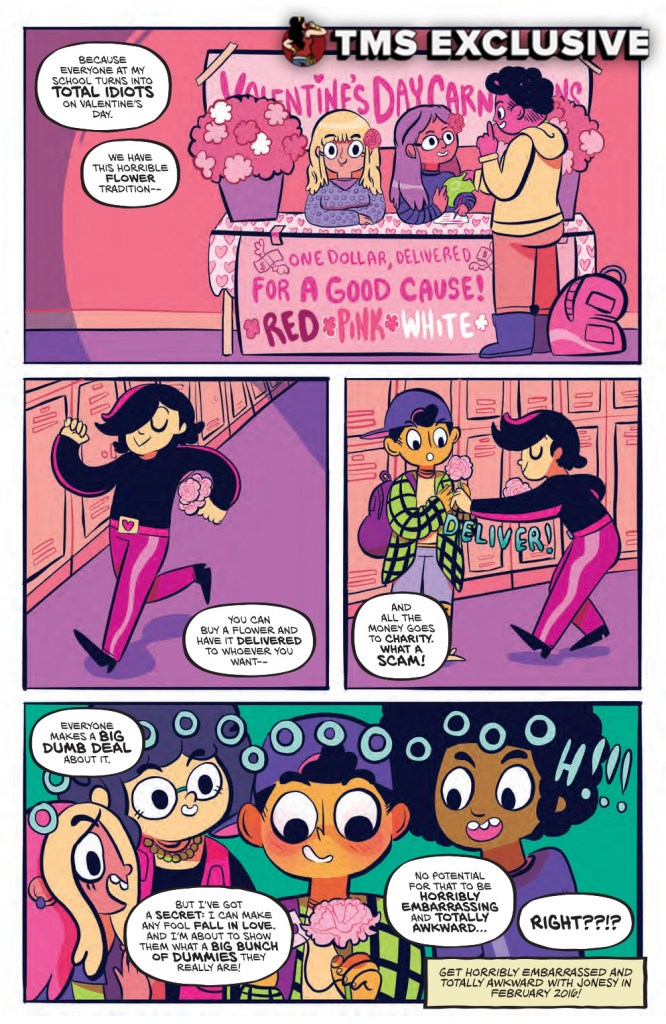 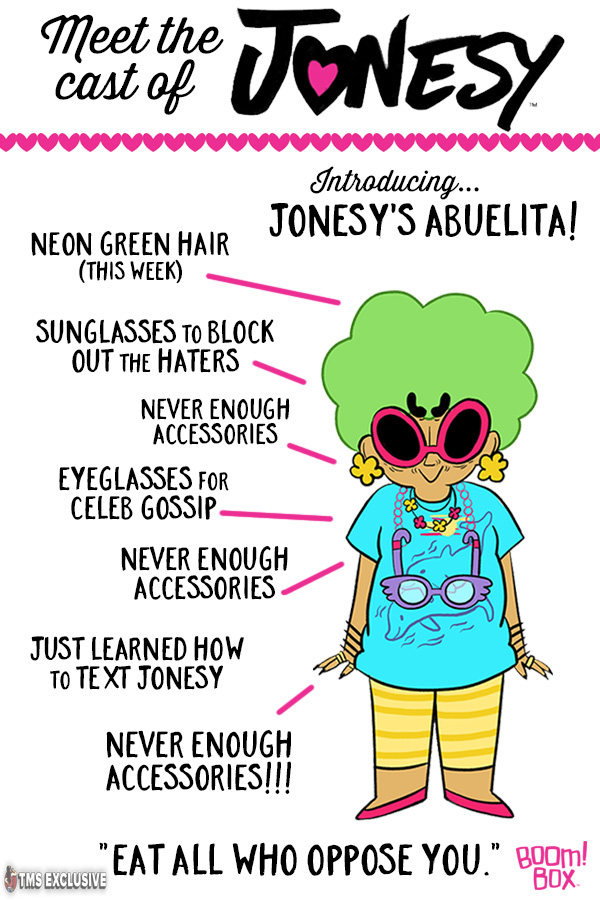 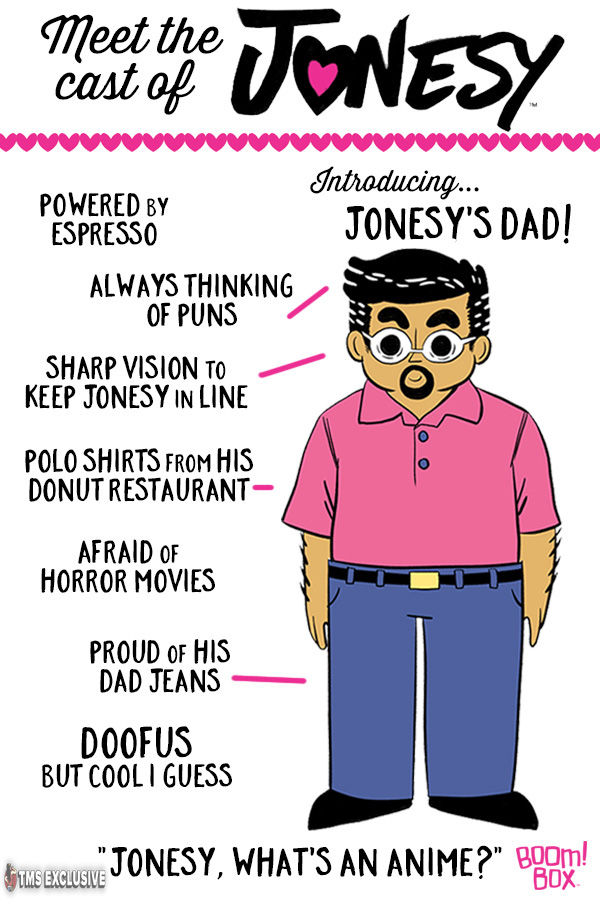 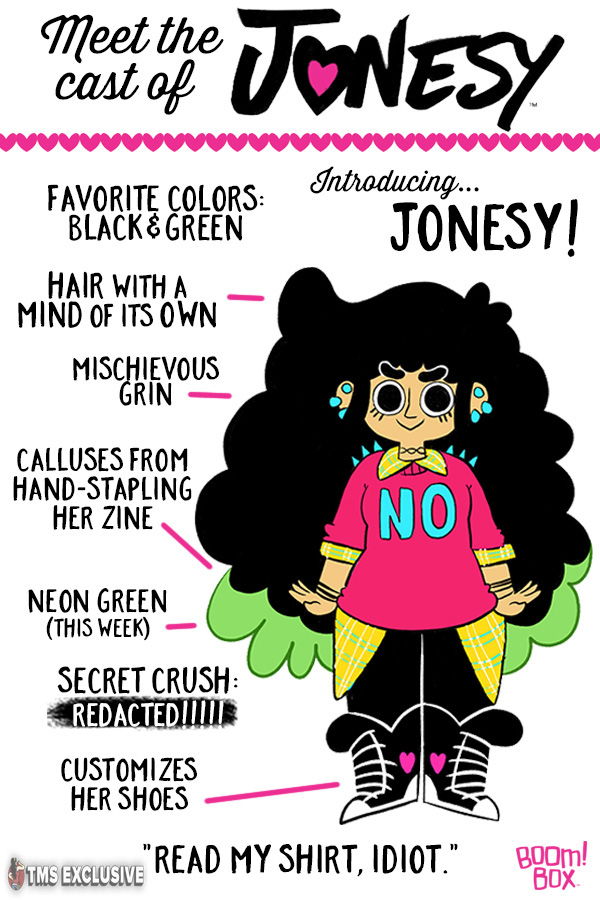 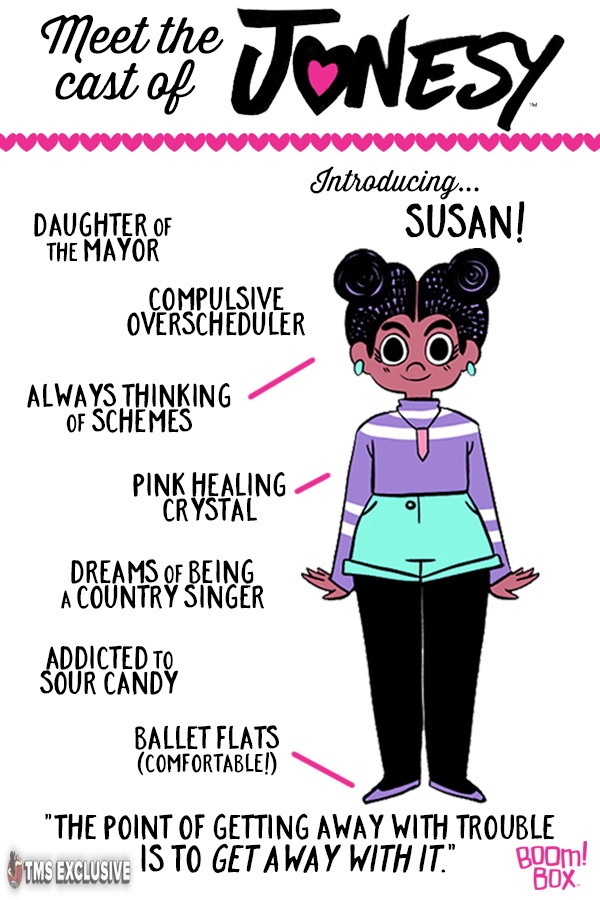 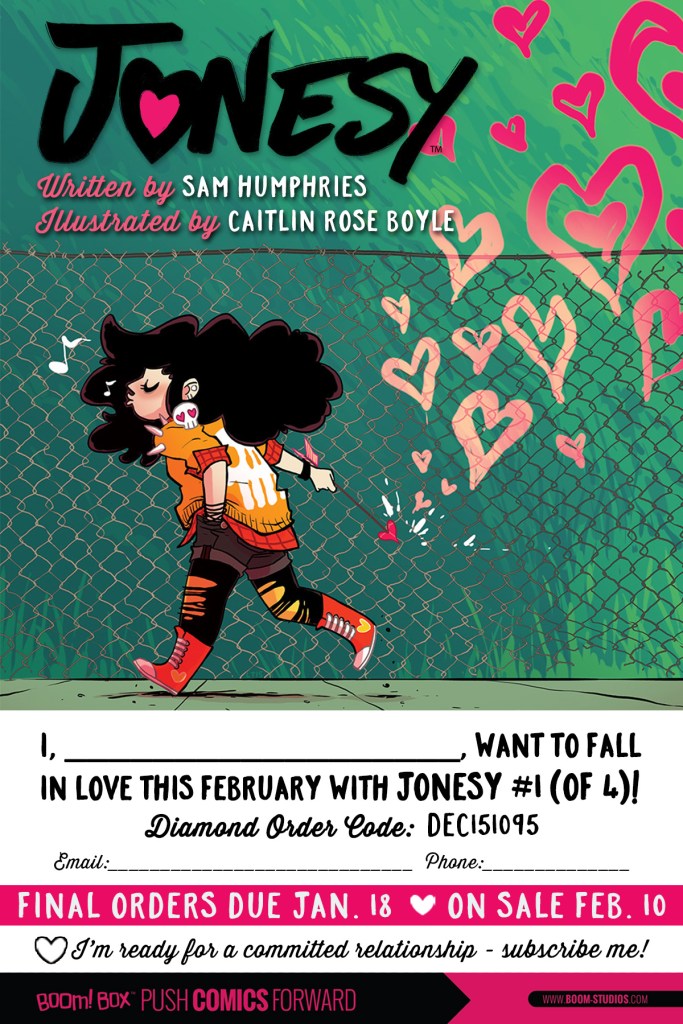 What’s to Love: Just in time for Valentine’s Day, Jonesy is a comic about love that makes us swoon! Sam Humphries (Legendary Star Lord, Citizen Jack) and fresh talent Caitlin Rose Boyle (Buck n’ Lou & the Night Crew) bring something special to BOOM! Box with this series about mad-cap shenanigans, friendship, pals, being a teenager, and figuring out who you are…with a teen cupid twist! If you like Giant Days, dig adorkable romance stories, or just want to smile from ear to ear after reading a comic, you’ll fall in love with Jonesy!

What It Is: Jonesy is a self-described “cool dork” who spends her time making zines nobody reads, watching anime, and listening to riot grrrl bands and 1D simultaneously. But she has a secret nobody knows. She has the power to make people fall in love! Anyone. With anything. She’s a cupid in plaid. With a Tumblr. There’s only one catch—it doesn’t work on herself. She’s gonna have to find love the old-fashioned way, and in the meantime, figure out how to distract herself from the real emotions she inevitably has to face when her powers go wrong…