The Mary Sue Interview: Director Amber Benson Gets Her Shevenge and Talks About Why She’s a Feminist

"I'd love to live in a world where we can be Humanists ... But we're not there yet." 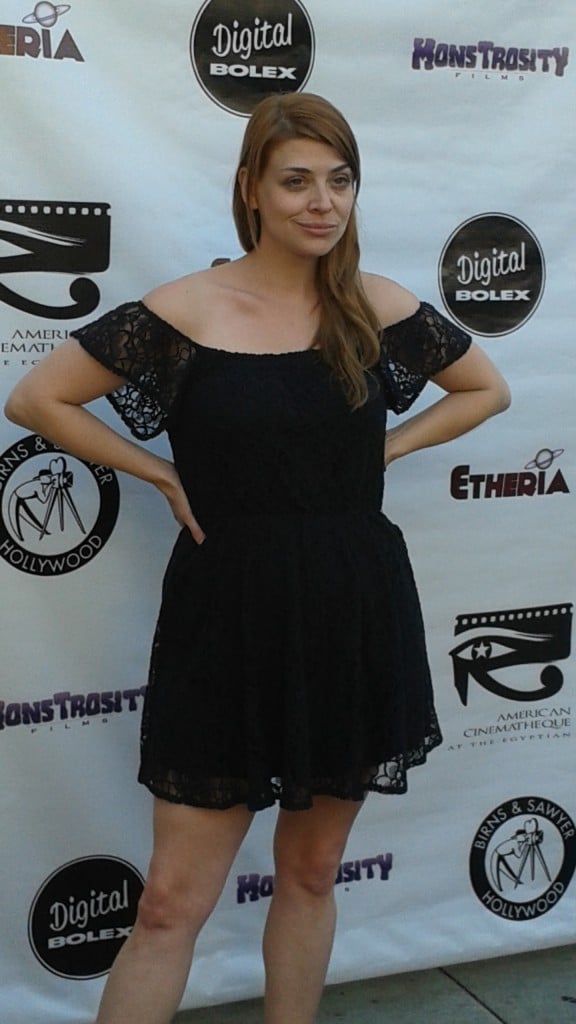 Amber Benson on the red carpet at Etheria Film Night.

One of the other wonderful filmmakers we got to chat with at Etheria Film Night at the Egyptian Theater in Los Angeles is Amber Benson. You might know her as Tara from Buffy, or as the author of the Calliope Reaper-Jones series of novels, but she is also an accomplished director. Currently, she’s traveling to various film festivals in support of her latest short film, Shevenge, a comedy about three women and their fantasies about taking revenge on the boyfriends that may (or may not) be mistreating them. The film stars Emme Rylan, Jessica Sherif and Megan Lee Joy as the women who discuss their violent and crazy fantasies over snacks at a slumber party. We had the chance to chat with Amber about Shevenge, as well as about how she subverts stereotypes about vengeful women in the film, and why she considers herself a feminist.

Amber Benson: I do a lot of things to pay the bills! I think the reason I enjoy directing so much is because I get to boss everybody around. [laughs] My Type A personality comes out. But honestly, I love being the general and leading my troops into battle, and inspiring people to get excited about making something. And I get to use all the things that I do as an actor, and a writer, and a producer in the directing capacity. I’m constantly like a psychologist dealing with interactions between people on set, I’m coming up with shots with the DP, working with the writer…you get to do everything, you get to wear all the hats, and that’s fun for someone who’s a little ADD.

TMS: Hell hath no fury ... that’s one of the oldest stories ever. How do you feed into certain stereotypes associated with that vs. subverting them?

Benson: Well, I think, because we wanted to play with the idea What does it mean to be a woman? What does it mean to be a woman in a relationship and feel like: am I being treated with respect? Am I not being treated with respect? And over the course of these three fantasies, there’s every aspect of that. One of the women may or may not be treated badly by her boyfriend, and maybe she’s in the wrong. You don’t know. So we’re sort of playing with that idea of what does it actually mean to have that kind of relationship with somebody who’s of a different gender. We’re screwing around with the stereotypes, we’re turning them on their heads, we’re trying to have fun with it, and we’re trying to make people laugh, and be entertaining, and maybe to think about things a little bit.

TMS: Does Shevenge live exclusively as a short? Or are there plans for…if the Magic Money Fairy came and just gave you a jillion dollars … ?

Benson: We’ll do whatever the Magic Money Fairy says. Shevenge 2: Back in the Bed! [laughs] That sounds so horrible! It sounds like we’re doing pornography. And we’re not. Well … maybe we are! There are some sexy moments … No, we’re not doing pornography.

But we wanted to do something where these three women—it’s not about them Being Women, it’s about them being individual people who are different, and unique, and special. And yes, they happen to be women, but they’re strong, and they’re interesting, and they’re fallible, and they make mistakes sometimes. And I think that’s valid. I think you have to look at women as anti-heroes – they’re not just kicking ass to kick ass. They’re real people. I think we lose the battle when we say that women have to be a stereotype. We win the battle when we say that human beings across the board are different, and just because you have a different gender than somebody else doesn’t make you better or worse. It sucks. I’d love to live in a world where we can be Humanists. And I held onto it for a long time going I’m a Humanist! But we’re not there yet. I have to be a feminist, because we have not reached that point of equality yet.

You can keep up with screenings of Shevenge by visiting their website.