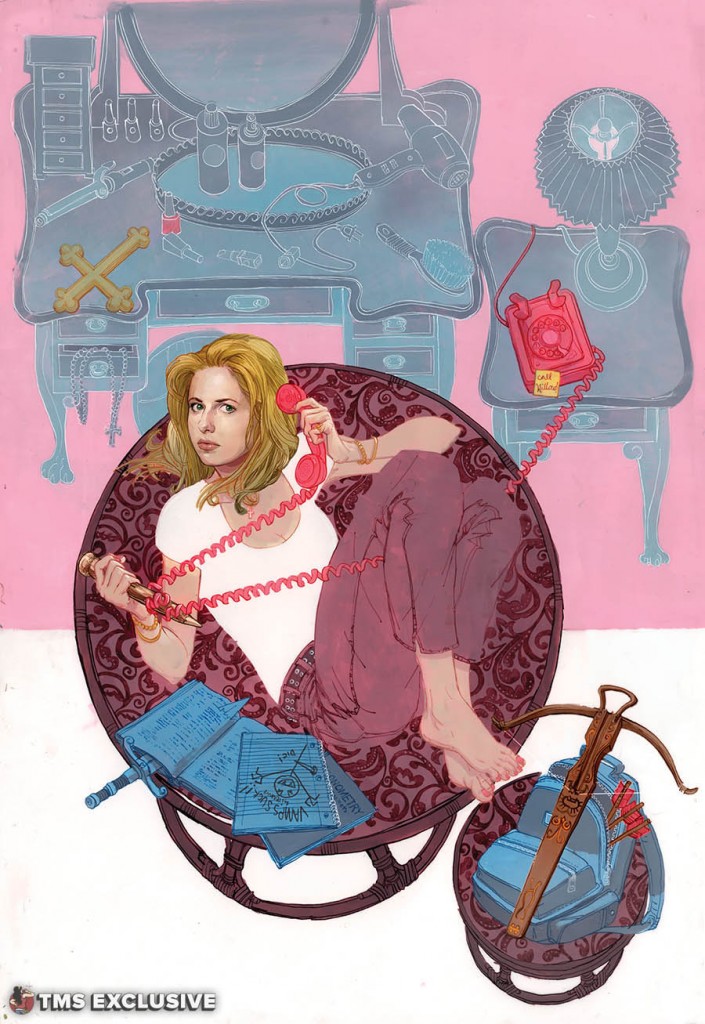 If you’re at New York Comic Con today, you may have already heard the news, but for those who missed it, Dark Horse Comics will be taking us back to Buffy’s high school years in a new, original graphic novel called Buffy: The High School Years – Freaks and Geeks, written by Faith Erin Hicks with art by Yishan Li (and cover art by Scott Fischer). Dark Horse has given us an exclusive first look at some of the artwork from the new book, as well as an exclusive interview with Hicks!

Teresa Jusino (TMS): Why should we revisit Buffy’s high school years? Haven’t we been there, done that? What is it about that period in Buffy’s life that warrants a re-visit? Is this about new readers, or do you think that long-standing Buffy fans have something to gain by going back to school with Buffy and the Scooby Gang?

Faith Erin Hicks: I’ve been thinking of this comic as as a lost episode of the TV show from early in season 1. It’s a fun story from early in Buffy’s Slayer life, when things were a little less complicated. Buffy’s in high school, recently moved to Sunnydale, she’d adjusting to her new life as the Slayer. She’s met Angel, but hasn’t yet dealt with all that drama. Buffy’s still tough and badass, but less experienced, and she makes mistakes because of that inexperience. I hope the comic will be for both new and old fans of Buffy. More seasoned fans will hopefully get a kick out of a brand new story from Buffy’s high school years, and because it’s not continuity heavy, a new fan with only a passing knowledge of the show could pick it up and enjoy a stand alone Slayer adventure. For me it’s a chance to get back to the core of Buffy the Vampire Slayer, the excitement of seeing a superpowered teenage girl kicking all kinds of supernatural ass.

TMS: What drew you to writing this project? How did you get involved?

Hicks: What drew me to the project was the chance to work on a series that was formative for me. I started making comics because of Buffy the Vampire Slayer. Seriously, I did! My very first comic, made while I was in college, was a rip-off (er, homage) to Buffy. It was about a superpowered teenager, her two friends, and the various supernatural goings-on she had to deal with while in high school. It was called Demonology 101, and I wrote and draw it as a webcomic from 1999-2004, back in the dark ages of the internet. Drawing that Buffy rip-off comic (er, homage) was how I fell in love with making comics, and why I now have this awesome career as a cartoonist. Seriously, 14 year old Faith is over the moon that an older version of her got to write a Buffy comic and Joss Whedon is vaguely aware that she exists. ;) 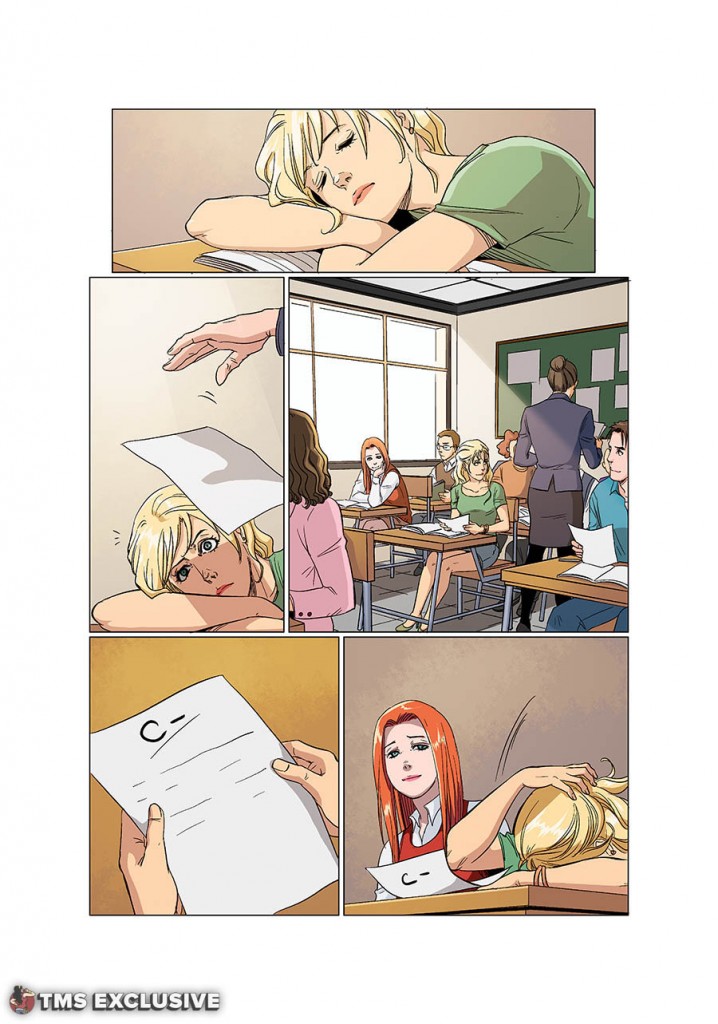 TMS: Yishan Li’s art looks very inspired by manga and anime. It’s gorgeous! Was it a conscious choice to have an art style that’s kind of the ultimate “teenage girl” style?

Hicks: I love Yishan’s art, and I’m so thrilled to be working with her! I really wanted an artist that had a bit of the manga influence (I love manga), and drew in a clean, appealing style, to give the book a Young Adult feel. Buffy is younger in this story, she’s sixteen, still dealing with adolescence and homework and crushes, and I wanted an artist who could reflect that time in her life. I think Yishan is doing a fantastic job. I hope we get to work together again!

TMS: What can you tell us about what Buffy will go through in this story? Where are we in her Slayer-ness? How will she be tested?

Hicks: Buffy isn’t the tried and tested slayer of the later seasons of the show, or the in-continuity Dark Horse comics. It’s earlier in her relationship with the Scooby Gang, so her friendships with them are a little more tenuous. We’ll see Buffy’s relationships tested a bit, as well as her perception of herself as a good person. Buffy will have to deal with a villain who preys on her insecurities, who finds chinks in her Slayer armor. I don’t want to say more than that, spoilers! 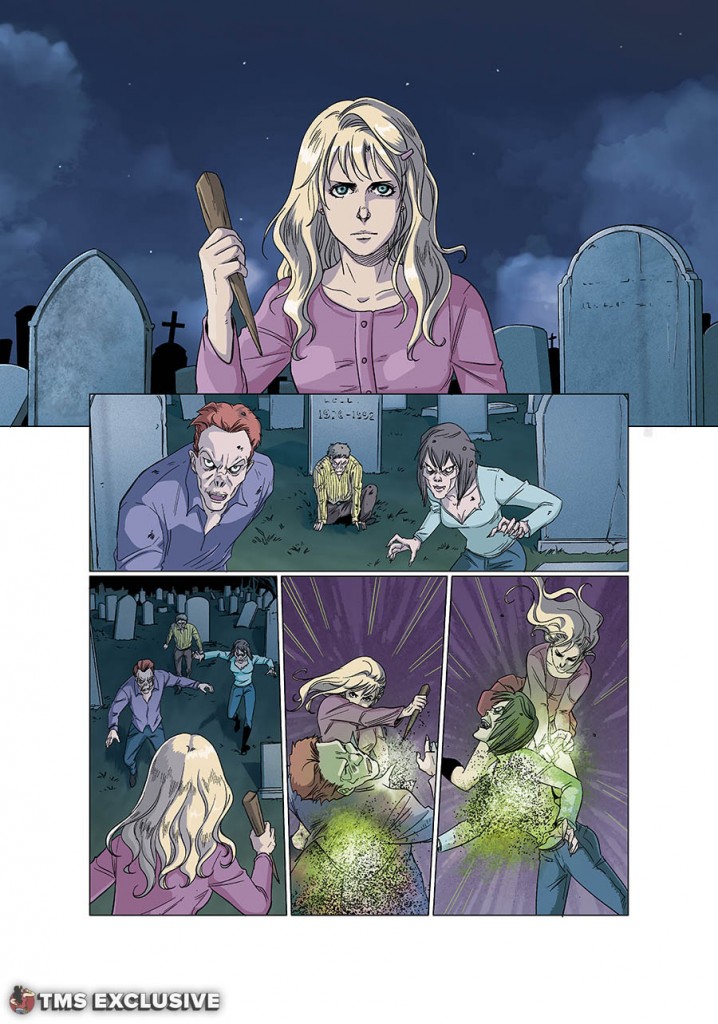 TMS: We noticed in the Official Synopsis that we might only be getting to know Giles, Willow and Xander. So, will there be no Cordelia mean-girl antics? Will any of the other Scoobs be introduced?

Hicks: Willow, Xander and Giles are all part of this story, and Cordelia makes a cameo. If the book is successful, Dark Horse might have me back to write more, which would be awesome. I’d love to dive into more Scooby Gang stories, and hopefully include Cordelia more prominently.

TMS:  Is this an alternate history, or a retelling? Really, I just wanna know if she’s gonna meet whiny, broody Angel. (#TeamSpike)

Hicks: I’d like to think of this story as something to enrich Buffy’s history, a little something extra from her past. So neither alternate history or a retelling. It’s a fight she went through earlier in her career. A fight which might include Angel, we don’t know yet. If I get the chance to write more of these stories Angel might show up, or he might just hang out in a cemetery, brooding in the rain or whatever he does for fun on Saturday nights. ;)

Stay tuned for more news on the latest Buffy escapades from Dark Horse! Meanwhile, are you excited to return to Buffy’s formative Slayer years? Do you want to return to Sunnydale?