Crash and Berg: James Cameron to Release Titanic in 3-D 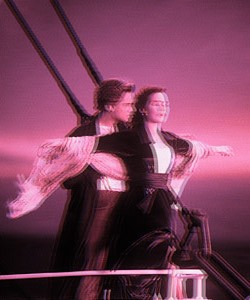 Yes, James Cameron, Avatar did really happen and it was pretty cool. But that doesn’t mean you need to go back into your past and put everything into 3-D, no matter how much they celebrate the multiple-of-tenth anniversary of something. The Titanic is turning 100 in 2012, and what better way to celebrate the hundredth anniversary of the tragic tale than by inundating theaters with crazed Titanic film fans again.

There are seriously people who went to see this film more times than its been years since the Titanic crashed. And 15 years later there will be an entire new generation of young DiCaprio enthusiasts to horde into the multiplex. There’s money to be made here for sure, but couldn’t we get a 3-D version of a movie that makes more sense in 3-D? You know, like anything else?

There were rumors that this (travesty) might happen, but they were confirmed at All Things Digital. Here’s a brief telling of said confirmation, courtesy of a Switched article with a distinctly Cameron-is-full-of-himeself tone:

Somewhere between talking about all things James Cameron, Hollywood, and James Cameron, the director was asked about the possibility of a 3-D Titanic re-release. Mincing no words, he responded, “We’re not thinking about doing that, we’re doing it. We’ll have it ready for the ship’s 100th anniversary.”

Regardless of how high James Cameron ranks on James Cameron’s list of priorities, it’s clear that he’s placing Titanic far higher than it deserves. For goodness sake, James, didn’t you milk it for all it was worth the first time? And that theme song better not get more radio play.

It is, after all, the most annoying song your roommate could play on the flute all the time (play the sample for the highlighted track).

(Via CNET via GNews via Switched)